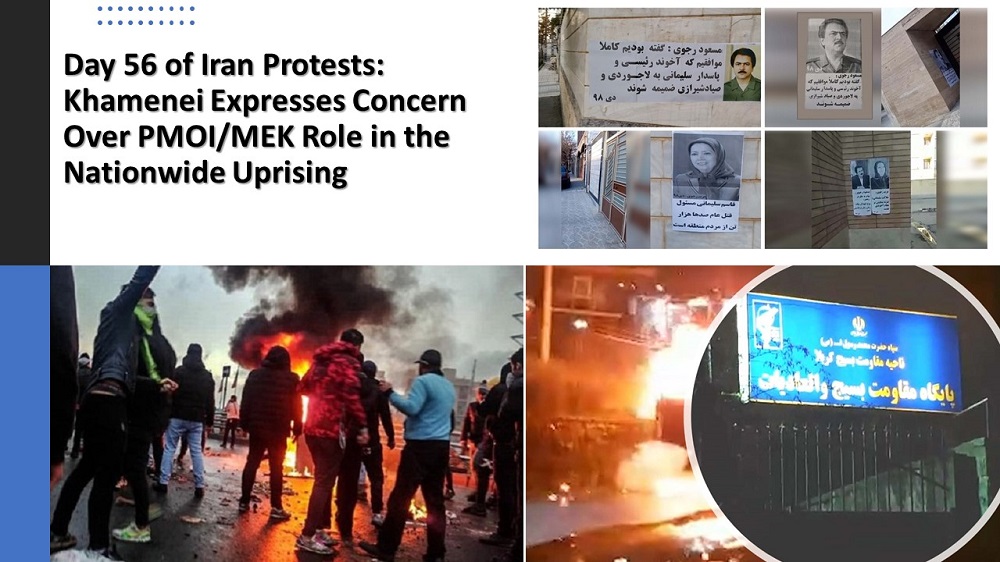 Thursday, January 9, 2020, marks the 56th day since the beginning of the nationwide Iran protests.

January 06, 2020—In Ahvaz and Isfahan, Resistance Units posted banners of Maryam Rajavi stressing that the elimination of Qassem Soleimani has dealt an irreparable blow to the Iranian regime. In Sari, Karaj, Tehran and Isfahan, Resistance Unit members posted banners of Massoud Rajavi, calling for the continuation of the uprisings and the accountability of regime officials for their crimes. “In one word, the MEK’s goal is for the [Iranian] people to rule [their country].” In other cities, resistance units wrote graffiti on walls, calling for the overthrow of the regime. The Resistance Units also vowed in their messages and banners that they will continue the path of the martyrs of the November uprising. “Democracy, freedom, with Maryam Rajavi,” wrote a Resistance Unit in Qeshm, an island in southern Iran.

January 7, 2020—While Iranian regime officials continue to mourn the death of former Revolutionary Guards (IRGC) Quds Force chief Qassem Soleimani, members of “Resistance Units” and supporters of the Iranian opposition People’s Mojahedin Organization of Iran (PMOI/MEK) across the country are celebrating this event, which has been to the benefit of the Iranian people and the nations of the Middle East region.

Maryam Rajavi: Friday, a Day of Mourning for the Passengers of the Plane Shot Down by the Regime

Mrs. Maryam Rajavi, the President-elect of the National Council of Resistance of Iran (NCRI), offered her condolences to the families of the passengers of the Ukrainian airliner shot down by the Iranian regime’s missiles and declared Friday as a day of mourning. Mrs. Rajavi added: Khamenei, enraged and demoralized over the elimination of Qassem Soleimani, cannot challenge the United States, but has free reins in shooting at the people of Iran in the air and on the ground and takes revenge on the Iranian people. He is now threatening the Mujahedin-e Khalq (PMOI/MEK) in Albania.

IRAN: POSTING MESSAGES AND PICTURES OF RESISTANCE’S LEADERSHIP IN TEHRAN, OTHER CITIES

Time has come for liberating Iran from mullahs’ occupation; patriotic personnel must join the people

On January 7 and 8, 2020, Resistance units posted the banners and messages of Mrs. Maryam Rajavi, the President-elect of the National Council of Resistance of Iran (NCRI), and Mr. Massoud Rajavi, the Leader of the Iranian Resistance, in Tehran, Mashhad, Isfahan, Shiraz, Tabriz, Rasht, Qazvin, Ahvaz, Kermanshah, Borazjan, and other cities. 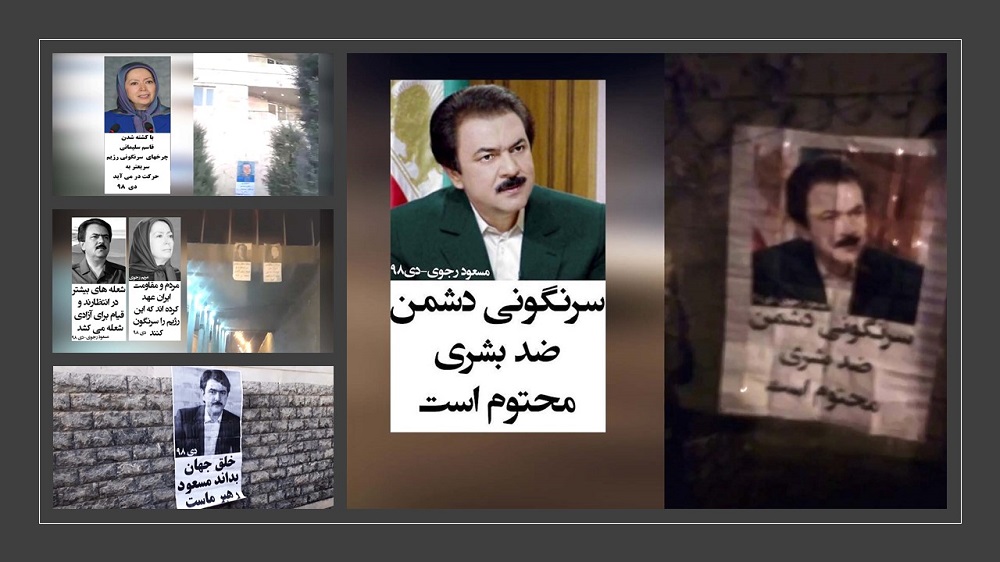 Khamenei again displayed his fear of the MEK and Resistance units, referring to the MEK in Albania and General James Jones’ visit to Ashraf-3. Several days before the uprising, in a small and sinister European country, an American joined some Iranians and planned the gasoline crisis.

The Iranian regime’s meddling in the region is not from a position of strength but derives from the crises it faces and its fundamental weaknesses.

Read more: Day 55 of the Iran Protests for Regime Change

Previous articleMaryam Rajavi Called For A Day Of Mourning For The Passengers Of The Plane Shot Down By The Regime
Next articleIran: Posting Messages and Pictures of Resistance’s Leadership in Tehran, Other Cities