A Glance at Iran’s State Media: Rising Trends of Protests Amid Different Crises 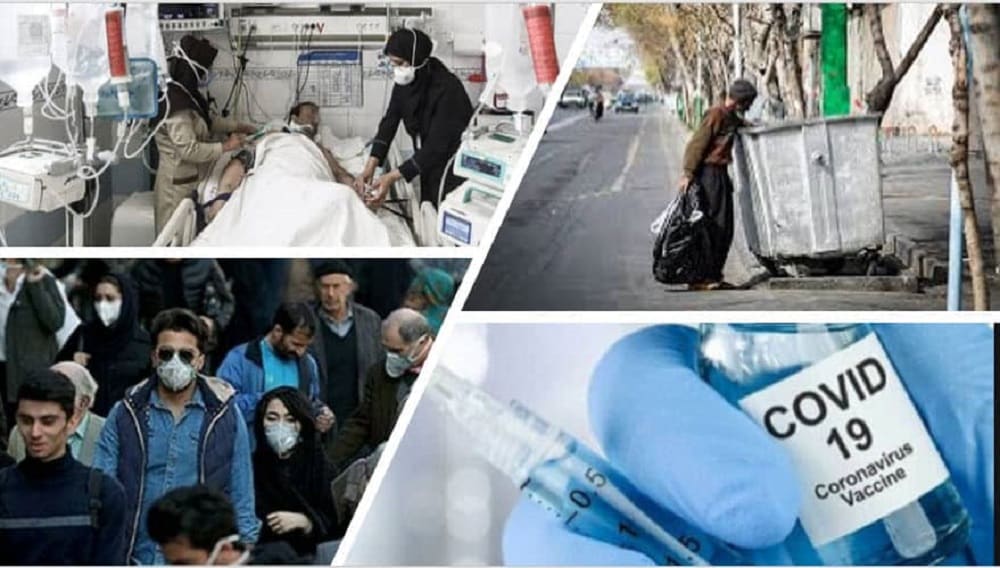 In recent days, Iran’s state-run media have been acknowledging the country’s social crises and possible uprising by the frustrated public. The state-run media also highlighted the current Covid-19 crisis and the regime’s inhumane coronavirus policy.
“We cannot say that the entire population has received one dose of Covid-19 vaccines, and there is general immunity. We cannot claim that 50% of the population has been vaccinated. Some [officials] seemingly use these words to escape from the public opinion’s pressure,” the state-run Arman daily wrote on Sunday, rejecting claims by the regime’s new president Ebrahim Raisi of rapid vaccination.

While referring to the regime’s delay in vaccination for at least 7 to 8 months, Arman daily asks, “who should be blamed?”
The regime’s Supreme Leader, Ali Khamenei, banned the entry of credible Covid-19 vaccines, and the regime officials implemented his decision through duplicity and inaction.
“This is a national cause, and with this, many of victims. There have been trials for much smaller massacres than [the Covid-19 catastrophe in Iran]. Tell people the truth,” Arman daily adds.

Iran: Regime’s role in escalating numbers of Covid-19 deaths is fueling public anger
Iran’s Economic Crisis and Bogus Claims of Raisi
The state-run media referred to the current economic crisis in Iran and Raisi’s bogus claims of resolving these issues.
“Iran’s economy has faced numerous problems in recent years, and these problems have caused people’s life to become harder daily. In addition to livelihood problems, economic markets have faced many challenges, and these problems continue,” wrote the state-run Ebtekar daily on Sunday. “There are experts who believe that in the second half of 2021, we should not wait for a change, and the economy is facing a difficult path,” Ebtekar daily adds.

As always, state-run media warn about people’s reaction to the ongoing crises and the possibility of another uprising.

“The [regime] cannot do any trial, and opportunities have been taken away from the people and officials. Today we are in a special situation where the [regime] needs to make urgent decisions and offer short-term solutions. One of these decisions is the reduction of prices that the government must make. Contrary to the government’s promises to reduce prices in the past two months, the recent price increase has been unprecedented,” Arman daily wrote on Sunday.

Jahan-e Sanat daily on Tuesday mocked Raisi’s gestures of resolving all problems. “If, as the pro-government media wrote, Raisi’s simple phone call caused the flood of vaccine entering Iran and he broke the barrier of sanctions, he could now simply unfreeze our foreign exchange resources with a few phone calls and even a trip to China and Baghdad!” the article reads.

“Raisi seems to be unaware of the difficulties in freeing up blocked resources, or that the issue of freeing up foreign exchange resources is the same as in the case of importing vaccines; as if sanctions only affected the previous government, not the new government! But there is another possibility that Raisi is repeating Hassan Rouhani’s strategy: speech therapy to control the price of the dollar!” Setare Sobh daily wrote on Tuesday.
The state-run media also acknowledged the rising trend of the recent protests across Iran.

“It seems that many of the problems that need clear legislation are still to be shrouded in mystery. One of these important issues is the social protests that are taking place these days by some people, especially teachers and workers, to improve their living conditions,” wrote the state-run Etemad daily in an article titled “Raisi’s government and Protests,” on Tuesday.

“The recent arrests are apparently intended to prevent the continuation or spread of protests and to intimidate trade unions. Yet due to the Iranians’ spirit, the arrest of a person hurts the conscience of his colleagues and encourages them to continue his path,” Etemad daily wrote, adding, “As a result, a situation of anomaly prevails over the phenomenon of protests, the biggest loser of which will be the [regime] amid the rising pressure on different segments of the country,” Etemad daily adds.

Previous articleIran News in Brief – September 29, 2021
Next articleSwiss Federal Court Orders the Swiss Attorney General To Investigate the Murder of Dr. Kazem Rajavi as Genocide and Crime Against Humanity