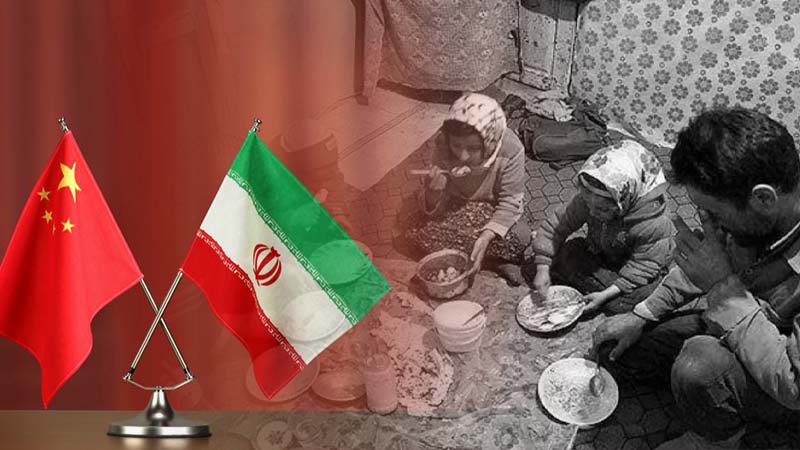 In a disgraceful agreement, the mullahs’ regime auctioned Iran’s natural resources and national wealth to China on Saturday. This so-called “strategic and comprehensive plan” was finalized in 2013, when the Chinese president met with the regime’s Supreme Leader, Ali Khamenei. The question is why the regime has signed such an agreement, while many of its officials call this agreement disgraceful?

Khamenei and his regime refuse to publish details of this agreement.

“[The regime] may have given concessions to its counterpart [China] for being under sanctions. The powerful counterpart will receive the lion’s share of this agreement. We could accept this criticism [that the regime is auctioning Iran], and it is true. Because the foreign policy has somehow distanced from nationalists’ ideals in decades ago,” wrote the state-run Arman daily on Saturday.

In another article, Arman daily on Saturday wrote: “From the beginning of the revolution, we thought that because Iran was rich, this wealth should be used for political and security purposes and the revolution should be exported. As a result, Iran’s economy has always been at the service of politics and security. These two misconceptions have led the value of the national currency to free fall in the face of sanctions. Due to the lack of strong economic structures, other parameters have also fallen, and innocent people are under the pressure of domestic mismanagement and large-scale embezzlements. The middle-class families have fallen under the poverty line.”

The regime state-run media had previously warned that China is not a reliable partner for the regime. “In a crucial situation, China, such as Russia, preserved its interests with the U.S. When it was needed, if its interests were jeopardized, turned its back on the Islamic Republic,” wrote the state-run Jahan-e Sanat daily in an article in this regard, entitled “Reliable partner or a fair-weather?” in July 2020.

The regime intends to find a way to save the economy from collapsing, fund its illicit activities and, more importantly, prevent its downfall by popular uprisings by impoverished and angry people.

In return, the regime will have this chance to strengthen its oppressive forces. Another fact that shows how mullahs use Iran’s wealth to keep their regime in power.

“Part of the new military co-operation includes an exchange of personnel between Iran and China and Russia, with up to 110 senior Iranian IRGC men going for training every year in Beijing and Moscow and 110 Chinese and Russians going to Tehran for their training,” wrote the Oil Price website wrote on July 6, 2020, in this regard.

Concerning this deal Mrs. Maryam Rajavi, the President-elect of the National Council of Resistance of Iran (NCRI), said: “The anti-Iranian mullahs’ regime auctioned the resources and properties of the people of Iran in a 25-year contract with China. Last year, I did emphasize that the lives and health of Iranians, their water and land, their culture, and national resources do not have any value for Khamenei, Rouhani, and other regime leaders. The mullahs only think of preserving their own religious fascist dictatorship, which Khomeini said is the most important issue. He said they could even forsake the precepts of Islam to preserve the regime. Therefore, the mullahs could not care less about protecting the Iranian people’s assets and resources.”

Last year, I did emphasize that the lives and health of Iranians, their water and land, their culture and national resources do not have any value for Khamenei, Rouhani and other regime leaders. #Iran

Therefore, the mullahs could not care less about protecting the Iranian people’s assets and resources. #Iran

Iranians quickly reacted to the regime’s disgraceful agreement with China. On Saturday, a dozen cities across Iran witnessed protests by people calling for the deal to be canceled. This deal will weaken Iran’s collapsing economy. Iranians are now facing skyrocketing prices and unbridled inflation amid the Covid-19 outbreak. Instead of addressing Iran’s economic crisis, the regime has now auctioned Iran’s national wealth.

This will certainly anger Iranians and adds to society’s restiveness, which is already on the verge of explosion.

Previous articleIran: Coronavirus Death Toll in 529 Cities Exceeds 240,800 – 117 Cities Are Orange and Red
Next articleIngrid Betancourt: This Persian New Year is the year of victory of Iran’s people and Resistance