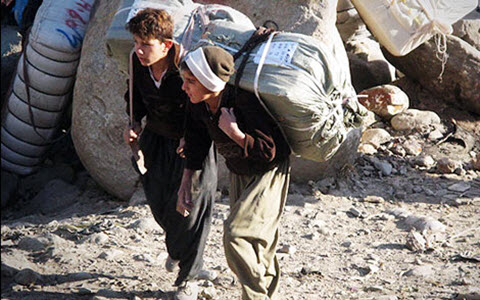 NCRI – A member of the Iranian regime’s parliament, referring to what he calls “Crisis of Student Kolbar (Porters)”, said that 75,000 people in Iran involved in porterage, some of whom are students who are being killed during porterage.

Rassoul Khezri in an interview with a state-run news agency on October 28 said that students in western provinces of Iran are involved in porterage. “We are facing crisis of student porters and loss of their lives,” he added.

Several reports have also been published about the activities of a number of students from the western provinces of Iran as porters.

After the death of a number of porters in the borders and mountain areas due to the avalanche in the winter of 2016, the father of Ali Mohammadzadeh, one of those porters, said that his son was 18 years old and, along with a number of his friends, received about 150 to 200 thousand Toman each time for porterage.

Literature teacher of Ali Mohammad Zadeh also told Etemad newspaper that “many students in the border towns are involved in porterage but they never say this at school or before their friends”.

Kolbar (porter) is referred to those who carry goods across the border on their shoulders to earn a living. They are involved in porterage mainly in the provinces of Western Azerbaijan, Kurdistan, and Kermanshah.

Khezri said that porters carry about 220 kg goods on their shoulders and “in addition to the heavy weight they carry, physical problems threaten them”.

This member of the regime’s parliament also said that the porters have to pay 95 percent of the cost of their health insurance themselves.

There are reports of a number of deaths caused by the Iranian security forces firing at the porters in the mountains and border areas.

In August and September 2017, demonstrations were held in the cities of Baneh and Sanandaj in protest of the killing of two young porters, residents of the city of Baneh, and a number of people were arrested.

Like other social challenges, the Iranian regime sees no solution to the problems of society except oppression and the porters are no exception to this rule.

Previous articleRegime Official: “In Iran, 49 People Are Being Jailed per Hour”
Next articleIran Regime, the Main Obstacle in the Way to Peace in Yemen