Iran Currency’s Value Plunges, Another Failure for Regime amid Uprising 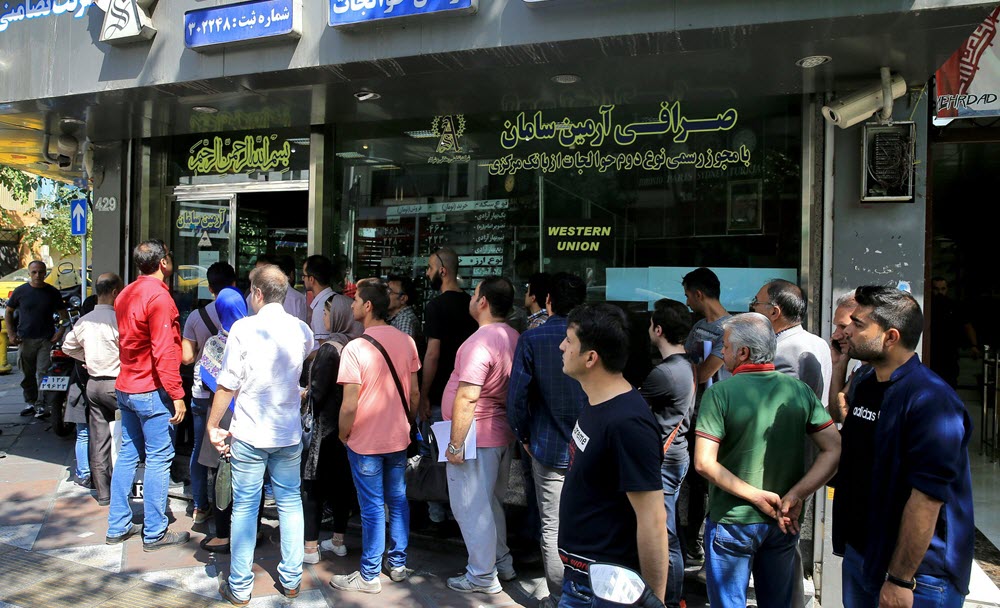 Iran’s national currency rapidly plunges, now reaching an all-time low rate of 410,000 rials versus a US dollar. The Rial’s freefall indicates a catastrophic economic crisis in Iran and a deep sense of insecurity among investors.

Many economic experts consider the currency’s devaluation to continue since its rate depends on macroeconomic factors such as inflation, the increasing liquidity rate due to the regime’s banknote printing, huge capital flight, destruction of production, and low GDP.

While Iranians are being crushed under this economic pressure, the regime’s president Ebrahim Raisi and his government spent time denying the crisis, claiming financial growth and achievements. Iranians can hardly make ends meet as prices of basic commodities soar, but Raisi boasts about decreasing inflation, economic growth, reopening closed factories, and an abundance of people’s basic needs.

“The enemy is frustrated and envies our progress. They do not want to see our country progress in production, industry, agriculture, and other scientific fields. The train of development is on track, and the enemy wants to stop it,” he bogusly claimed on December 15 in a speech in the city of Birjand.

For the past four months, Iran has been rocked by anti-regime protests.  The nationwide uprising initially began following the tragic murder of a young Kurdish girl accosted by the morality police. Mahsa Amini’s death was the spark that took Iran’s explosive society out of the control of the Iranian regime. Decades of economic and social crises due to the regime’s corruption, mismanagement, and ineptitude, were contracted as social hatred, and it took only an ignition to blow up.  Now people chant on the street, “For poverty, corruption, high prices, we will continue until the regime’s downfall,” as they consider the ruling theocracy as the origin of all economic and social problems.

Yet, the stubborn facts do not hinder officials and state media from twisting the truth. “Enemies resort to riots since they envy a strong Iran that continues advancing in science,” Keyhan daily, known as the supreme leader, Ali Khamenei’s mouthpiece, wrote on November 24.

As the regime’s highest authority, Khamenei has been the first to claim economic achievements and scientific developments. Raisi and other officials, and the state media only repeat Khamenei’s words and try to implement his methods.

Khamenei had claimed on various occasions that the regime’s “scientific development speed is 13 times the average global paste,” “We are among the top countries in terms of nano-technology,” “We rank fourth or fifth in the world in missile and drone capabilities,” and “we are the world’s 18th largest economy.”

The real train that speeds amid the regime’s domestic and international crises is indeed the train of lies and deceit. As these crises become more dangerous for the clerical regime, authorities increase their deception and bogus claim.

Yet, the freefall of the country’s downfall alone debunks religious fascism’s claims. Tehran is bereft of any solution to deny the plunging of the national currency and the rising prices of commodities. The upward trend of the exchange rate and coins reflects the freefall of the Rial and indicates the state’s absolute economic bankruptcy and people’s worsening poverty and misery.

Besides, this economic crunch indicates Raisi’s failure. When selected as the regime’s president by Khamenei in Jun 2021, Raisi promised to control the currency rate, decrease the inflation rate to one digit, realize an economic growth of 8%, and build four million houses. He even went as far as ridiculously ordering prices to stop increasing or poverty to be eradicated in two weeks!

Now the unprecedented devaluation of Iran’s currency debunks all these claims and so-called “projects.” The dollar exchange rate has gone from 260,000 Rials in September 2021 to 410,000 Rials. In other words, in less than a year and a half, 60% of the currency’s value has reduced, and consequently, the purchasing power of the people has decreased.

During Raisi’s inauguration in July 2021, Khamenei described his presidency as a “very meaningful act”. “New officials with fresh initiatives will take the lead,” he forecasted. Khamenei’s real purpose in pulling an unscrupulous mass murderer like Raisi was consolidating power in his regime to oppress a looming uprising easily. But he failed miserably as oppression and Raisi’s government couldn’t stop what many consider a revolution in the making in Iran, and protests have continued for four consecutive months despite the regime’s attempts to quash them.

Khamenei had blamed Raisi’s predecessor, Hassan Rouhani, and his government for not implementing his economic guidelines. But since Raisi has come, Khamenei cannot lay the blame on his handpicked government, helping the public to understand he is the real problem as the regime’s top authority. Therefore, the main slogan of the current protests is “Death to Khamenei.”

“The Islamic Republic has failed in all economic, social, political, and cultural domains. This [uprising] is a small flame of a larger fire of wrath, unhappiness, and mistrust due to the corrupt mismanagement that left people’s vital demands unattended while trying to control their personal lives. If we do not act now, a huge explosion will happen,” Hossein Ansari Rad, a former MP and top official warned Khamenei in a letter on December 25.