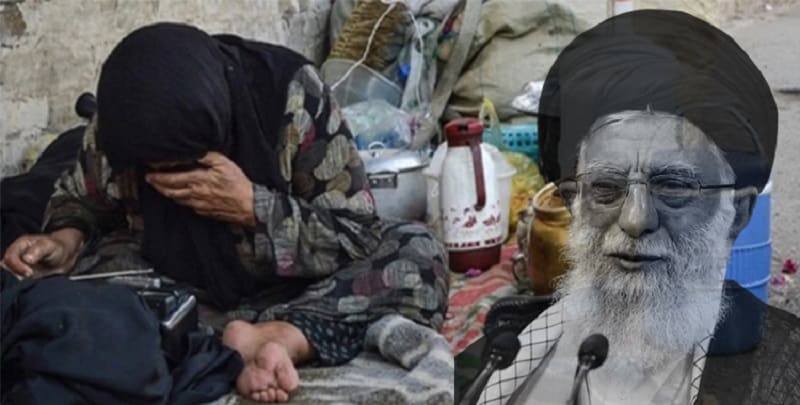 The regime’s Supreme Leader, Ali Khamenei, appeared on state television on March 5, on the national arbor day, shedding crocodile tears for Iran people’s economic and social grievances. Yet, he refused to offer a solution for people’s economic hardships.

He referred to a number of issues and crises, such as the coronavirus outbreak. Most importantly he tried to minimize the economic crisis, which is due to his regime’s corruption and mismanagement.

“Sadly, people’s livelihood is not good these days—this an enormous grief for us. There are very much high prices on the [Persian] New Year’s Eve, such as [prices of] fruit,” he said. He then admitted to “dealers” who profit from the high prices, which are nonother than the regime’s affiliates who control Iran’s different economic aspects.

Khamenei tried to hide the truth about people’s unbridled poverty and cover up his role and one of his Revolutionary Guards (IRGC) in plundering people’s wealth and destroying Iran’s economy.

Due to the regime’s institutionalized corruption and economic mismanagement, more people are going under the poverty line on a daily basis.

Due to the regime’s wrong policies, Iran is in a deep economic crisis. Some aspects of this crisis are the massive budget deficit, staggering liquidity growth, rising inflation, free fall of the national currency, rising unemployment, closure of at least 2,000 factories and production units due to Khamenei’s so-called “privatization plan,” institutionalized corruption, embezzlement, and plunder of people’s wealth. The regime deceived people and used the Stock Exchange market bubble growth to plunder 300,000 billion tomans, devastating the lives of at least 2 to 3 million people.

“The purchasing power of the people has now reached a sixth of 2014 … The poverty line, which was about 2 million Tomans in 2014, has reached above 10 million Tomans today,” wrote the state-run Keyhan daily on March 4.

“Inflation has now reached a point where some people cannot afford to buy a whole loaf of bread, and they leave their national identity card as a security deposit to get a loaf of bread. In such a situation, chicken and eggs are considered a luxury item,” wrote the state-run Resalat daily on March 2.

“In the last 15 years, the average misery index, the product of inflation in unemployment, in Iran has been more than three times the global average. Only one country in the world, Venezuela, has a higher misery index than Iran,” wrote the state-run Jahan-e Sanat on February 27.

The flip side of people’s poverty is the regime’s systematic corruption. Khamenei once called his regime’s corruption, “the hydra of corruption.”

Behzad Nabavi, a government minister in several administrations, in an interview with the state-run Alef news agency on September 21, 2019, said: “In our country, there are four institutions which control 60 percent of the national wealth. This includes the Execution of Imam Khomeini’s Order (Setad Ejraie Farman Imam), Khatam-ol--Anbiay Base, Astan-e Quds, and Foundation of the Oppressed and Disabled. None of these institutions are in connection with the government and parliament.”

All these institutions are under Khamenei’s supervision.

The regime’s economic mismanagement has turned the society into a powder keg, and the ongoing protests in Iran by all walks of life are testaments to this fact. Despite Khamenei shedding crocodile tears, people know who is really responsible for their hardships. During all three major Iran protests since 2018, people always chanted, “Our enemy is here, they [regime] lie that it is the U.S.”

The regime’s state-run media, thus, have been warning officials of another uprising.

“It is not easy for people to tolerate the coronavirus outbreak and the current economic and political conditions for the next 7 or 8 months, and this may impose unforeseen conditions on us,” wrote the state-run Hamdeli on February 27.

A Glance At Garbage Collecting Tragedy in Iran