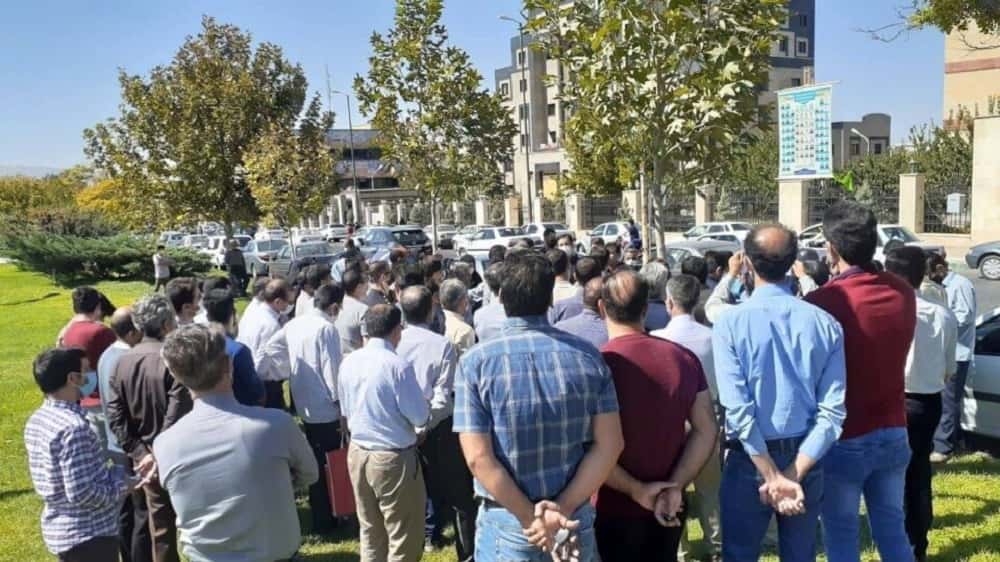 Iran’s school year began on September 23. Like any other national occasion, the 2021 academic year in Iran showed the depth of social crises in Iran under the mullahs’ regime.
The academic year began with hundreds of protests across Iran by teachers and academics due to their poor living conditions. In Tehran and many other cities across Iran, teachers held protests in front of the education ministry and government offices. These protests happened after another round of nationwide protests on Saturday.

Iranian teachers are protesting the regime’s destructive policies, its failure to rank teachers based on their years of experience and education, refusing to adjust their meager wages with the rising inflation rate, and its refusal to pay pension for retired teachers or salaries teachers on time.

Teachers were chanting during their recent demonstrations:

• “Officials are giving false promises.”
• “Teachers will die but won’t accept disgrace.”
• “Retired teachers reflect the situation of employed ones.”
• “Education workers are awake and fed up with lies.”
• “Imprisoned teachers must be freed.”

In a statement marking the beginning of the new academic year, the Iranian Teachers Coordination Council stated the deplorable situations of teachers and underlined their demands.

“The government and Parliament are obliged to approve this initiative. If this initiative is approved and implemented, the legal basis for teachers’ wage will be at least 80 percent of that of faculty members, because teachers and members of faculty boards should be receiving equal salaries,” the statement read. The regime indeed has its hands in teachers’ pockets by refusing to maintain their salaries at a low level. The poverty line in Iran is 120 million rials (about $437 per month). Yet many teachers receive 35 million rials, which means they are paid about 1,300 euros a year.

“The bell of the first school year under the new administration rang while demands and delayed wages of teachers grow and intensify every year,” wrote the state-run Etemad daily on September 25. But teachers are not the only ones suffering. Due to the regime’s institutionalized corruption, the lives of many Iranians are devastated, and the majority of people are living under the poverty line. The workers’ salary base is 2 million and 600 thousand Tomans in 2021. The regime has increased the salaries by 10%.

“Officials are constantly blaming rising wages for the increasing inflation. The 10% increase in wages does not comply with the poverty line of 10 million Tomans,” wrote the state-run Kar-o Kargar daily on September 21. The estimated costs of personal stationery are nearly 3 million tomans. Iranian workers receive nearly 4 million tomans. So, they should spend most of their salaries to pay for their children’s stationery. In addition, the regime charges parents.

Besides, the regime has not decided whether, due to the Covid-19 pandemic, should continue online studies or attend the schools. Many Iranian students, as young as seven years old, have committed suicide in the past two years for not having the ability to purchase a smartphone for attending online classes. In recent years, regime officials have acknowledged the government-linked state media, which profits from online classes or in-person classes.

Mohammad Mehdi Zahedi, Member of the Parliamentary Education Commission, told the state-run Mashreq News on June 13, 2020, that “there are mafias in the Ministry of Education with the annual income of 10 trillion tomans.”

The regime’s institutionalized corruption and its need to fund illicit activities in the region has for years motivated the mullahs to plunder the national wealth or seize any opportunity to steal people’s belongings. This mafia consists of the so-called “educational institutions,” which are systematically connected with the regime’s corrupt institutions.

Another concern Iranian teachers and students, along with the families have, is the amplifying Covid-19 crisis. Due to the regime’s inhumane Covid-19 policy and refusing to vaccinate the entire population, many families fear their children be infected with the new Covid-19 variant. The regime had started vaccinating children and adolescents using the highly controversial Sinopharm vaccines.

The facts mentioned above only show a portion of the current social crises in Iran. People are suffering at the hands of this regime. These crises and the regime’s actions have indeed increased the public’s hatred toward the regime. The recent protests by teachers and people from other walks of life demonstrate this public hatred toward the regime.
As the state-run Arman daily underlined on September 26, “The Iranian society can longer tolerate [the regime’s] trial and errors. Opportunities are taken from the people and officials. Today, we are in a special situation where the [regime] needs to make urgent decisions.”

Previous articleIran: Dr. Kazem Rajavi’s Murder Should Be Investigated As Genocide And A Crime Against Humanity
Next articleIran: 440,900 COVID-19 Deaths Across the Country