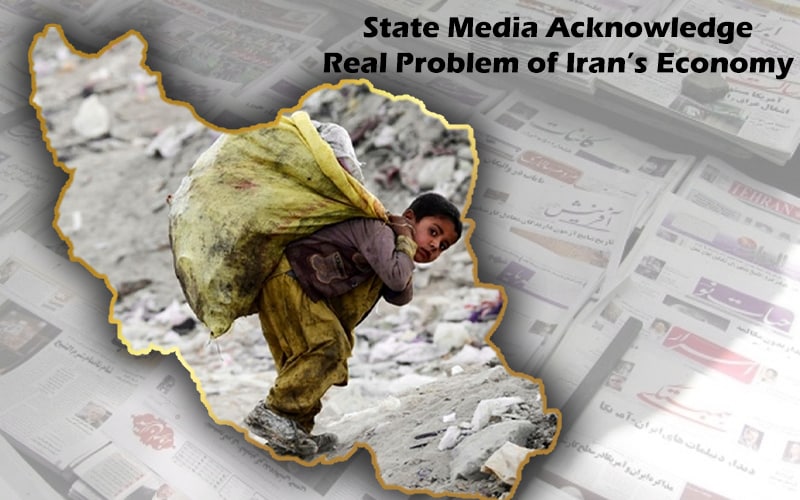 Iran’s state-run media in recent days have acknowledged some aspects of Iran’s economic crises. These media outlets, which are affiliated with the regime’s factions, sometimes reveal astonishing facts about the regime’s corruption amid their factional feuding. These facts underline that Iran’s economy and people suffer from the regime, its corruption, and wrong policies.

“Economists believe that the country is currently facing many challenges such as structural inflation, low economic growth, coronavirus pandemic and lack of rapid vaccination, nuclear negotiations and sanctions, demographic window and the employment problem, social security and pension funds, improving the business environment, water resources crisis, capital outflow in the country, and privatization,” wrote the state-run Tabnak News Agency on May 23.

One of Iran’s economic crises, which affects Iranian people’s daily lives, is the rising inflation rate.

“Inflation is the most important socio-economic issue in Iran, which has caused tons of money, equivalent to $350 billion of capital in the housing sector, to remain stagnant. Stagnant capital is about $ 650 billion in gold and coins and about $ 20 billion in foreign exchange,” state-run Sharq daily wrote on Thursday.

“As a result, about one trillion dollars of stagnant capital remains unused and stagnant due to inflation and does not enter the field of production,” Sharq’s article adds.

According to Sharq’s article, “Iran’s point-to-point inflation rate in March 2021 compared to March 2020 is about 48.7 percent, which is a very high figure compared to some of Iran’s neighboring countries.”

“The current issue of Iranian society, especially on the eve of the elections, is the livelihood of the people. People are facing challenges in daily life, and there is an employment crisis. On the other hand, salaries are not only not strengthened but also weakened.

Arman’s article then asks: “The question is: how did the country’s economy reach such a state?”

As Arman daily acknowledges, the regime only fears the consequences of the economic crisis and people’s reactions.

“Our economy is based on embezzlement and speculation,” said Hossain Raghfar, one of the regime’s economists, on Wednesday, according to the official IRNA News Agency.

While referring to the recent power outages across Iran and the scarcity and the high prices of meat, Raghfar acknowledged how the regime’s corruption damages Iran’s economy.

“One of the issues today in the case of power outages is the issue of currency codes. China, India, Turkey, and Poland are [mining bitcoin] in Iran because of cheap electricity. Or the scarcity of meat. On the one hand, livestock is smuggled to the countries of the southern Persian Gulf, and on the other hand, meat is imported,” Raghfar adds.

The regime has been introducing official plans to plunder Iranians. One of these so-called plans is “Empowerment and sustainability of the Social Security Organization.”

On Thursday, the semi-official ILNA News Agency reported: “The Empowerment and Sustainability of the Social Security Organization plan were announced with the signatures of 34 members of the 11th parliament.”

According to ILNA, “On the one hand, this plan fundamentally changes the basis for calculating pensions and increases the years of calculation from two years to 20 years. On the other hand, the plan reduces the benefits of hard and harmful pensions. The plan, which was secretly written and is slowly moving towards final approval, is the first plan by the authorities to reduce workers’ rights.”

ILNA acknowledges that this plan is the regime’s “most important attack on the workers’ salaries and purchasing power. About salaries, because private-sector costs are high and income is low, workers are not entitled to higher wages.”

The so-called private sector is another name of the regime’s Revolutionary Guards (IRGC) which dominates Iran’s economy.

This plan also legalizes abuse of labor children in Iran. “They force children to work under the pretext of strengthening the economy. Under this plan, the government could define public jobs, that is, simple jobs for which, for example, 30 percent of the minimum wage would be paid to young people under a certain age,” ILNA wrote.

According to ILNA, based on this plan, “People, for example, 14 or 15 years old, should be paid 30% of the salary of 3 million Tomans, which is one million Tomans.” Meanwhile, the poverty line in Iran is above ten million tomans.

“Under this plan, workers between the ages of 15 and 70 must work at agreed wages, well below the current minimum wage, receive a pension one-third of the poverty line, and let authorities plunder their historical savings in the Social Security Organization,” ILNA acknowledged.

“Simply put, because employment conditions and insurance funds are both critical, officials say: ‘Let’s sacrifice the working class to pump blood into the veins of the oligarchy,” ILNA concluded.