As Protests Spread Across Iran, Regime Shuts Down the Internet 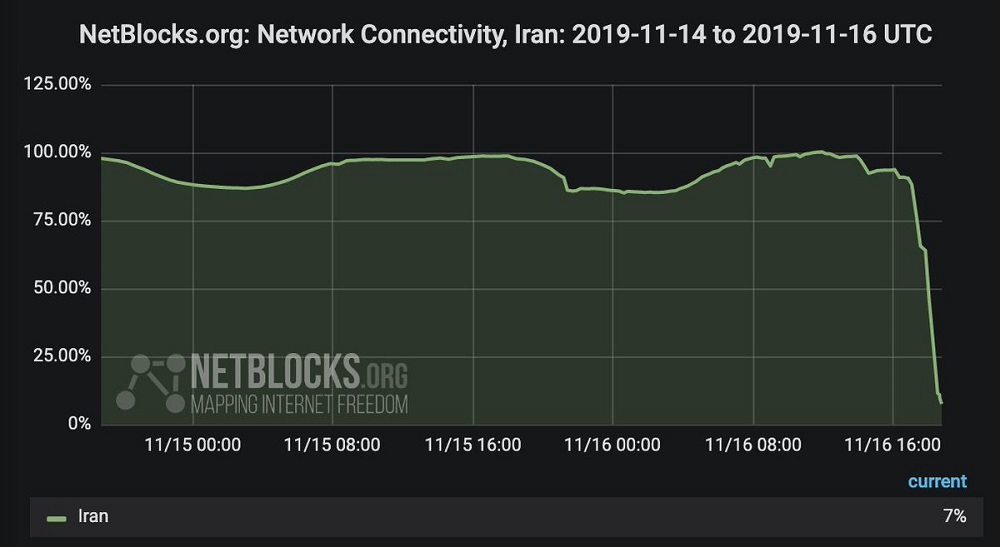 Iran’s regime has shut down the country’s internet to prevent news of the is now in the midst of a near-total national internet shutdown; realtime network data show connectivity at 7% of ordinary levels after twelve hours of progressive network disconnections as public protests continue ?

The Iranian regime’s shutting down of the internet is a clear violation of the Iranian people’s basic right to Internet access, also known as the right to broadband or freedom to connect, which is the view that all people must be able to access the Internet in order to exercise and enjoy their rights to freedom of expression and opinion and other fundamental human rights, that states have a responsibility to ensure that Internet access is broadly available and that states may not unreasonably restrict an individual’s access to the Internet.

There were other reactions to the regime’s oppressive measures on the internet. Richard Grenell, the United States ambassador to Germany, condemned the shutdown of internet access in Iran and called on large tech companies to support the people of Iran and help restore their access.

Despite the internet shutdown, protests continued on Sunday and are currently intensifying in different cities. According to reports obtained by the network of the People’s Mojahedin Organization of Iran (PMOI, Mujahedin-e Khalq or MEK) inside Iran, in some areas, the protests were even more intense than the previous day and spread to even more cities.

Over 100 cities across Iran are witnessing massive protests in response to a recently imposed gas price hike by the Iranian regime. Protesters are targeting the regime in its entirety in their political slogans against Iranian regime Supreme Leader Ali Khamenei, President Hassan Rouhani and the Revolutionary Guards (IRGC) as the source of all their miseries.

Khamenei voiced deep concerns on Sunday over the escalating uprising now spreading to 107 cities checkered throughout the country. Protesters have destroyed over 101 regime centers in various locations. Security forces have killed at least 67 protesters in clashes with demonstrators.