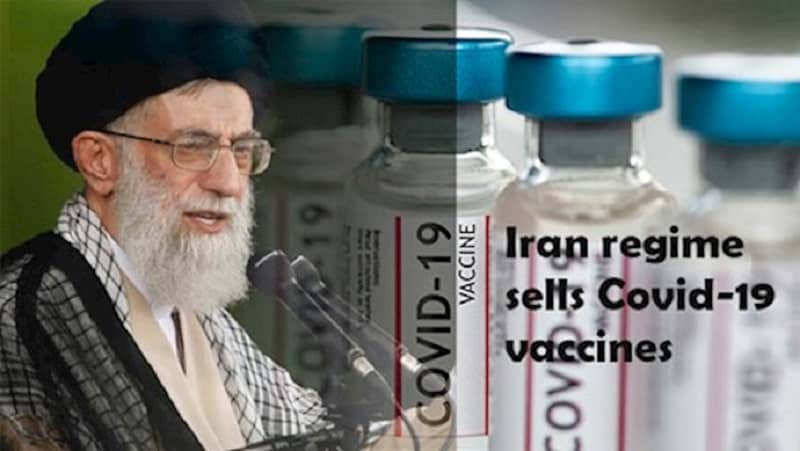 The People’s Mojahedin Organization of Iran (PMOI/MEK) announced that Iran’s Covid-19 death toll surpassed 370,000 this week, with daily mortality exceeding 2,000 cases. The Covid-19 death toll continues to rise rapidly since the regime rejected all proposals for long-term mitigation efforts and had embraced a strategy of promoting natural immunity through mass death.

The regime’s Supreme Leader Ali Khamenei has been adopting this inhumane Covid-19 strategy based on the dual motives of safeguarding his own hoard of the national wealth and forestalling mass public demonstrations like those which rocked the regime in January 2018 and November 2019.

More than 376,400 people have died of the novel #coronavirus in 547 cities checkered across all of Iran's 31 provinces, according to the Iranian opposition PMOI/MEK.

During the major Iran protests in November 2019, the regime’s security forces and the Revolutionary Guards (IRGC) opened fire on crowds of protesters, killing over 1,500 in a matter of days. The judiciary, under now-President Ebrahim Raisi, undertook a campaign of systematic torture in the wake of those killings. And yet in January 2020, thousands of Iranians took to the streets again across more than a dozen provinces to condemn the IRGC for a missile strike on a commercial airliner and to reiterate the prior uprisings’ calls for regime change.

Given that this resurgence of unrest took place while the crackdown on the November 2019 uprising was still ongoing, the large-scale protests might have continued long afterward if not for the added risk to public health created by the coronavirus pandemic. This decline was the result of the regime’s inhumane policies with Khamenei referring to the deadly virus as a “blessing.”

In the wake of that speech, Khamenei delayed the requested release of one billion dollars from the nation’s sovereign wealth fund. Meanwhile, hundreds of billions of dollars remained untouched in so-called religious foundations under Khamenei’s direct control or earmarked for pet projects such as the financing of regional militant groups that have expressed loyalty to the regime. In March 2020, Khamenei also declared that the newly-begun Iranian calendar year should be devoted to “boosting production,” thereby signaling his expectation that Iranians should continue to work as normal in spite of the growing risk of the coronavirus spreading uncontrolled.

The condemnation of Tehran’s coronavirus response has gradually moved into the mainstream over the past year, and this trend was seemingly bolstered by Raisi’s presidential inauguration on August 5, which signaled an imminent change in personnel at all government ministries, including the Health Ministry.

Earlier this month, the head of Tehran’s Covid-19 response committee, Dr. Alireza Zali, issued rare criticism of the ruling system, including tacit criticism of the supreme leader, via interviews with state media. He said, for instance, that it was primarily concerned over cost which led authorities to avoid importing foreign vaccines, leaving the country drastically short of its targets for distribution. To date, less than four percent of the 83-million person population has been fully vaccinated, and a significant proportion of this number represents members of a tiny elite who have obtained doses at extortionate prices on the black market.

Shortly before the regime’s engineered Covid-19 death toll surpassed 100,000, the regime announced that it would soon be purchasing 30 million additional doses. The plans presumably involve the de facto reversal of an edict from the supreme leader which banned the import of all vaccines from “enemy” states like the US and Britain. The regime’s to following through on its promise or making purchases from other countries is doubted. Some see the 30 million dose projection as little more than another attempt at tamping down public unrest, which diminished in the wake of the nationwide uprisings but is poised to surge again, with Tehran’s mismanagement of the pandemic as another source of far-reaching grievances.

In July, the Iranian opposition’s President Maryam Rajavi spoke before a virtual summit on Iranian affairs and declared that the era coinciding with Raisi’s presidential leadership would be an era of dramatically increased conflict “between the Iranian regime and society.” In subsequent weeks, evidence supporting that prediction emerged in the form of new, large-scale demonstrations over issues like summertime blackouts and water shortages.

In many of these cases, the demonstrations included explicit calls for regime change which were distinctly reminiscent of the 2018 and 2019 uprisings. Now, the further increases in the death toll will surely contribute to public outrage over the regime’s callousness and/or incompetence.

Thus, Khamenei’s regime increasingly finds itself stuck between the impossible choice of either exacerbating the crisis and thus contributing to public outrage or working to mitigate the crisis and thus allowing the existing outrage to find an outlet sooner.