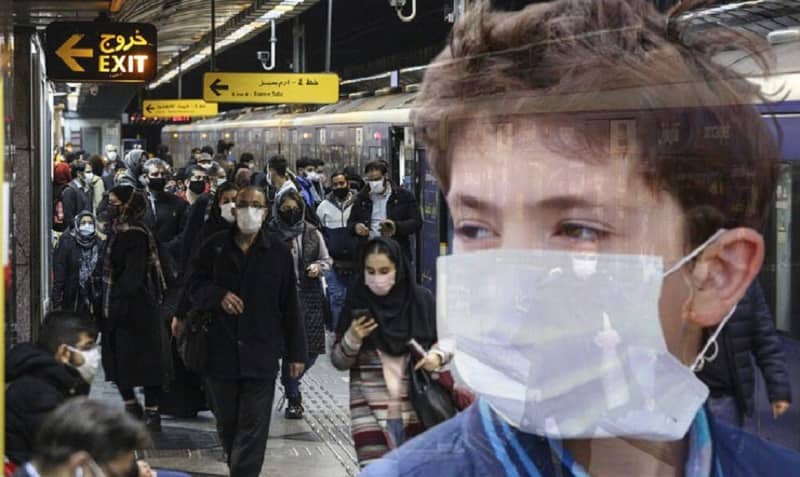 The coronavirus fatalities have surpassed 200,000 in Iran, according to reports tallied by the People’s Mojahedin Organization of Iran (PMOI/MEK). The regime in Tehran plays with people’s lives through its inhumane coronavirus policies.

After weeks of deception and the authorities’ vaccination scam, Khamenei clarified he had “ordered them” previously not to import the vaccine. All the while, the regime tried to depict international sanctions as the real obstacle in procuring the vaccine.

Khamenei’s remarks once again confirmed his intention of oppressing the Iranian people by using this deadly virus. Earlier in March 2020, Khamenei had described Covid-19 as a “test, “opportunity,” and “divine blessing.”

While Covid-19 fatalities continue to grow, procuring vaccines became a national demand. While there was no sign of the regime allocating a budget for procuring vaccines, the regime’s leaders resorted to all sorts of excuses to avoid public outburst yet continue using the virus to kill more people and buy more time.

The regime and its apologists first tried to blame international sanctions. On December 7, Abdolnaser Hemmati, head of Iran’s Central Bank, claimed that U.S. sanctions do not permit the transfer of funds or the purchase of the vaccine through COVAX, the organization endorsed by the World Health Organization to distribute the vaccine.

On December 9, Nasser Riahi, the head of the Iranian Drug Importers’ Union, said there is no problem in transferring currency to import the vaccine and other pharmaceutical items to Iran.

The regime’s president Hassan Rouhani also acknowledged on Saturday and said the regime “had vaccines that we could have imported sooner. There were companies that offered us the vaccine,” but Rouhani and Khamenei refused to import them.

The state-run Aftab-e Yazd daily wrote on December 14: “Regarding the coronavirus vaccine, officials have said that it is not possible to import foreign vaccines, but we are witnessing that vaccines have been imported from reliable countries and are being used by officials, along with their children and associates.”

The regime’s decision to not import credible vaccines from the U.S. or the United Kingdom was met with international condemnation.

Mansoureh Mills, a researcher for Amnesty International, said the ban by the regime was “in step with the authorities’ decades-long contempt for human rights, including the right to life and health.”

Khamenei and his regime also financially profit from what they call the production of the domestic vaccine. This so-called domestic vaccine, which 167 of Iran’s pharmacists have called a “joke,” is exclusively under the control of “Execution of Imam Khomeini’s Order” a financial institution under Khamenei’s control.

In this regard, the state-run Jahan-e Sanat on December 14 wrote: “The Food and Drug Administration is under heavy pressure to approve domestically produced vaccines and anti-coronavirus medicines. Because obtaining approval from the Ministry of Health means a huge profit for the drug owner.”

The Iranian regime’s inhumane coronavirus policy started at the beginning of the outbreak. The regime’s officials denied the existence of the virus in Iran and announced it in late February 2020.

Meanwhile, documents obtained by the Iranian Resistance from Iran’s National Emergency Organization showed patients diagnosed with Covid-19 were hospitalized as early as January 2020. Later, Mohammad Reza Mahboubfar, a member of the National Covid-19 Task Force, acknowledged that the coronavirus entered Iran as early as December 2019.

In July 2020, the State-run Mostaghel acknowledged how the authorities deliberately covered up the coronavirus outbreak, underlining that this virus, for the regime, “was a gift from heaven and a savior.”

“Long before its public announcement, COVID-19 had come or had been brought to Iran. But to defy [the U.S.], they held events marking the 41st anniversary of the 1979 revolution. And to slap those dissatisfied with the approbative supervision, the [sham] Parliamentary elections were held as scheduled. Then they said: we just found about the virus’ existence, so people watch yourselves,” Mostaghel added.

Also, the regime put existing medical facilities at the disposal of regime leaders and their ilk. Under the guise of combatting COVID-19, it sent the Revolutionary Guards (IRGC) and paramilitary Basij force onto the streets to create a militarized atmosphere in the cities. It continues to present a bogus death toll far below the real numbers. Another of the mullahs’ treacherous policies has been to lie about the situation improving – a policy based on fear of popular protests.

The coronavirus illness has been a test for all governments. The Iranian regime’s officials have shown that not only are they indifferent to the people’s health, but even worse, they see this deadly virus as a “divine blessing” and an “opportunity” to extend their rule, even at the cost of over 200,000 people’s lives.

The rising coronavirus death toll and the regime’s mismanagement has also increased people’s hatred toward the regime.

“A very important point is that if the Iranian government cannot resolve the problem in the months ahead, it would have a negative impact among the population because people will compare their society with others. Furthermore, public expectations have gone up,” wrote the state-run Aftab-e Yazd daily on December 8.

The exponential rise in the death toll, which has surpassed 200,000, indicates that this crisis will continue. If the regime genuinely wanted to control the virus, it would have supported the nation financially like other countries so that people would remain under quarantine without concerns over how to provide food for their families.

But the mullahs’ strategy of using this virus to oppress the Iranian people is doomed to fail.
Although the regime has imposed unbearable conditions on people, the same people brought about the November 2019 uprising. Thus, despite all the hardships, Iran’s restive youth are determined to end the regime’s inhumane circumstances by rejecting the mullahs’ regime in its entirety.

Khamenei’s number one priority is preserving his regime. He will use the nation’s resources on nothing other than their nuclear weapons initiatives, advancing the regime’s ballistic missile program, exporting terrorism, and funding his suppressive forces to counter any uprising. He seeks only to maintain his detested religious dictatorship intact.

For so long the West and EU have turned a blind eye to the regime’s malign activities and its violation of Human rights, now that the regime is misusing the deadly virus to massacre the people to stay in power, the international community must step in to put extreme pressure on the regime to accept independent monitoring of the regime’s broader response to the crisis.

Previous article
Anniversary of January 2020 Iran Protests: The Regime Continues Violating Rights of Protesters
Next article
Iran Regime’s Refusal of Foreign Vaccines Is Even Worse Than It Appears