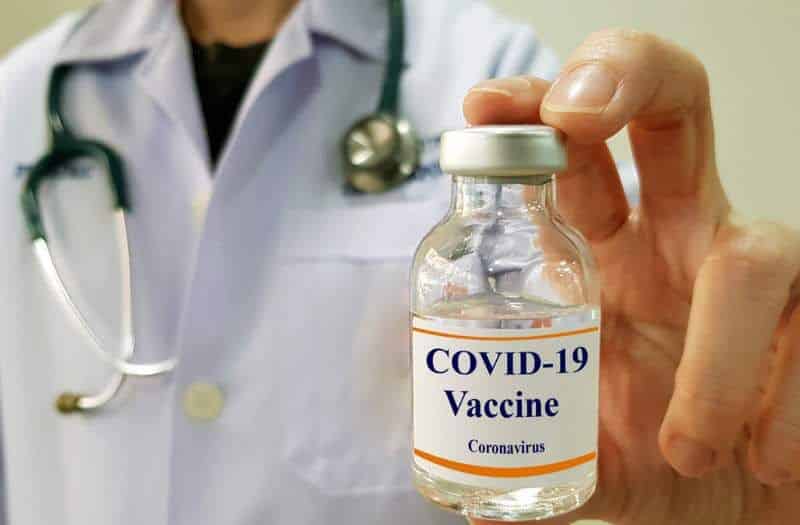 All governments made Covid-19 vaccination their priority once the World Health Organization approved several vaccines. Iran’s regime has claimed it is ready and willing to purchase vaccines but that sanctions prevent this process.

The regime’s president, Hassan Rouhani, on December 9, claimed: “The money to purchase vaccines is ready. We have the will to this, but the United States is preventing us.” Before Rouhani, Abdolnasser Hemmati, the Central Bank Chief, blatantly claimed on December 7 that U.S. sanctions were preventing Iran from procuring vaccines using the COVAX payment facility that is jointly managed by Geneva-based Gavi, the Vaccine Alliance, and the World Health Organization.

Gavi immediately rejected this claim. This organization’s spokesperson said was no “legal barrier” to Iran purchasing vaccines through COVAX as the U.S. Treasury’s Office on Foreign Assets Control had issued a license covering coronavirus vaccine procurement.

The regime has tried to blame the international community for all social and economic crisis inside Iran. Yet, Iranian people chanted during their uprisings in 2018 and 2019 that “our enemy is right here, they lie that it is the U.S.”

The regime can purchase vaccines but has refused to buy them for the people.
“Regarding the Covid-19 vaccine, the officials have said that it is not possible to import foreign vaccines. But we see that the vaccines have been imported from reputable countries and are being passed between elites, officials, and their family members,” wrote the state-run Aftab-e Yazd on December 14.

Similarly, at the beginning of the Covid-19 crisis in Iran, the regime’s official claimed sanctions prevent them from importing the coronavirus test kits, but it was revealed the regime had already imported the test kits. The regime’s Members of Parliament were first to receive 1500 test kits.

Initially, the regime refused to inform the public of Covid-19’s existence in Iran. While the regime claimed the virus entered Iran towards the end of February, the Iranian Resistance revealed documents from the National Emergency Organization, suggesting that it was directly transmitted from China to Qom and Tehran earlier than that.

“By late January, several infected individuals were identified in Tehran, and the regime had allocated certain hospitals such as Massih Daneshvar, Yaftabad, and Khomeini to deal with these patients. The authorities tried their utmost to prevent any information about these cases from leaking,” read the statement of the National Council of Resistance of Iran (NCRI) on April 3, 2020.

Mohammad Reza Mahboub-Far, a former member of the Iranian regime’s Coronavirus Taskforce, on August 9, in an interview with the state-run Jahan-e Sanat daily said: “The figures announced by the officials on coronavirus cases and deaths account for only five percent of the country’s real death toll.”

The Iranian regime tries to financially and politically profit from the Covid-19 crisis.
The Revolutionary Guards (IRGC) control the drug and medicine market in Iran. Importing vaccines from reputable global companies eliminates the enormous profits made by the medicine mafia owned by the IRGC.

Therefore, many of the regime’s authorities bogusly speak of producing “domestic vaccines.”

“The Food and Drug Administration is under heavy pressure to approve domestically produced Covid-19 vaccines and medicines, as obtaining approval from the Ministry of Health means a huge financial profit for the medicine owner,” wore Jahan-e Sanat daily in this regard.

Reports tallied by the People’s Mojahedin Organization of Iran (PMOI/MEK) indicate over 186,900 people in Iran have died so far due to the novel coronavirus. 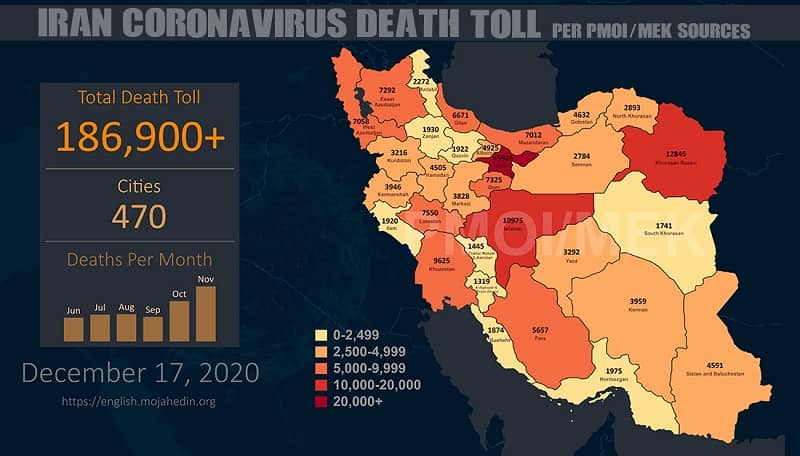 The number of casualties could have been much less if the regime had informed the public about the virus’s existence and used the country’s vast resources to help people.

But the regime chose to cover up and downplay the crisis, rapidly reopening the economy and schools, and when the situation went out of its control, it blamed people.

The major Iran protests rattled the regime’s foundation in November 2019. Although the regime has resorted to brute repression, killing at least 1500 protesters and arresting thousands more it could not reduce society’s restiveness.

As the state-run Mostaghel daily once wrote: “A savior was needed to divert people’s attention” from their demand for regime change. So, Covid-19 was a gift from hell for the regime.

Yet, daily protests across Iran by all walks of life indicate the regime’s policy of using Covid-19 mass casualties as a barrier to the uprising has failed.

In other words, since the regime did not contain and control the coronavirus to relevantly control the anger of defiant people, society’s restiveness has increased. Delaying the vaccination process is like playing with fire for the regime.

In this regard, Mahboubfar, on December 12, warned: “If other countries start the vaccination while we are still waiting, society’s tolerance will end.”

Previous articleIran’s Revolutionary Guards Are Clearly Terrorists, and So Is the Whole Regime
Next articleVirtual Briefing of the Friends of Free Iran (FOFI) Intergroup in the European Parliament