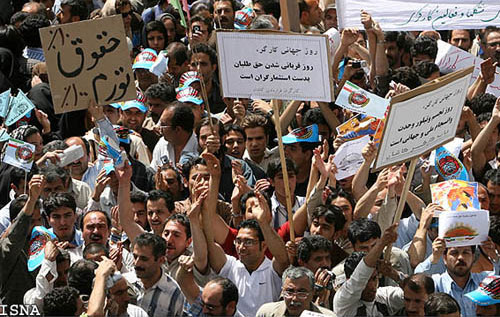 NCRI – The Iranian regime has banned workers from marching outdoor on International Worker’s Day and instead urged them to attend a speech by Hassan Rouhani in an auditorium.

Minister of Cooperatives, Labour and Social Welfare Ali Rabei said on Monday that the ceremony for International Worker’s Day on May 1 will be held in an auditorium, and the the march had be cancelled and replaced with Rouhani’s speech.

Even some officials of semi-official “House of Workers” have criticised the ruling with saying: “The decision by the government to not allow workers to stage a march on the International Worker’s Day has no justification.”

Alireza Mahjoub said that he made his request for a march on International Worker’s Day to the Interior Ministry in December last year, and that in March this year it verbally refused before being rejected in writing on Saturday.

Another government official said: “The Ministry of Cooperatives, Labour and Social Welfare has taken the initiative and plans to hold the ceremonies for labor week,” however by holding a government sponsored indoor event.

The Iranian regime has opposed and banned any march on International Workers’ Day for the past eight years, regularly attracting criticism from international labor organizations.

On May 1, 2009, despite intense suppressive measures and an undeclared martial law, thousands of Iranian workers marked International Workers’ Day by protesting against the clerical regime.

In Tehran, 5,000 suppressive forces blocked off streets leading to Laleh Park and held up the march of workers to prevent formation of protests.

While confronting the clerical regime’s suppressive forces, workers chanted slogans such as “Imprisoned workers must be freed,” and “We don’t want nuclear energy, we don’t want $180 salary.”

In the course of the clashes, more than 150 people, including women and teenagers, were arrested and taken to unknown locations.