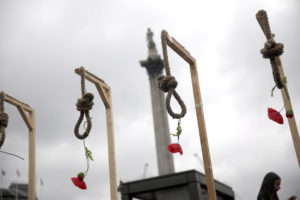 The Iranian regime executed Navid Afkari Sangari on Saturday despite global outcries to stop his execution. The regime did not have the capacity to halt Navid’s execution, since doing so was against the regime’s existential need for execution and suppression of a restive society. In addition, fearing Navid’s execution and his funeral could spark an uprising and increase further international pressure on them, the mullahs rapidly and secretly executed him and buried him at night.

Navid was arrested after the 2018 nationwide Iran protests along with his two brothers.

In another development on Thursday, the Iranian regime’s Supreme Court upheld the death sentences for the third time for seven Iranian Kurdish Sunni political prisoners after 11 years of detention. These prisoners were identified as Farhad Salimi, Qasem Abasteh, Davoud Abdollahi, Ayoub Karimi, Anvar Khezri, Khosro Besharat, and Kamran Sheikheh. They have been imprisoned and sentenced to death on bogus charges such as “acting against national security”, “spreading propaganda against the state”, “membership in Salafi groups”, “corruption on earth” and “moharebeh” or waging war against God.  Before the 38th Branch of the Supreme Court confirmed their death sentences on September 10, the 28th Branch of the regime’s so-called “Revolutionary Courts,” presided by Mohammad Moqiseh had condemned these political prisoners to execution in 2014. Moqiseh, also known as Naserian, was a key member of the regime’s so-called “Death Commissions,” responsible for massacring over 30,000 political prisoners in the summer of 1988.

Last week, the death sentence for Haidar Ghorbani, a Kurdish political prisoner, was upheld by the Supreme Court. The news indicates that the regime has also issued a death sentence for Shaker Behrouz, a political prisoner from Urmia, northwest Iran, who was arrested in February 2019. Behrouz has been subjected to vicious tortures to make false confessions. He has been sentenced to death on the charge of membership in a Kurdish opposition group and murder of a member of the Revolutionary Guards (IRGC).

Following the execution of Navid Afkari on Saturday, Mrs. Maryam Rajavi the president-elect of the National Council of Resistance of Iran (NCRI), said: “The religious fascism ruling Iran cannot survive a day without executions, torture, and domestic suppression. By spilling the blood of young people like Navid Afkari, the mullahs are seeking to maintain their hold on power in the face of Iran protests. The execution of Navid Afkari, however, will only add fuel to the flames of the Iranian people’s uprising and will send the mullahs’ regime to the dustbin of history.”

The religious fascism ruling #Iran will not survive a day without executions, torture and domestic suppression. By spilling the blood of young people like #NavidAfkari the mullahs seek to maintain their hold on power in the face of #IranProtests.

“The United Nations Security Council and its member states, the UN Human Rights Council, the UN High Commissioner for Human Rights, the European Union, and all international human rights authorities need to take practical, effective measures against the regime in Iran for the execution of Navid Afkari and 120,000 others executed on political grounds,” Mrs. Rajavi added.