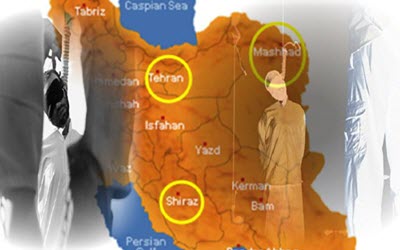 NCRI – The clerical regime’s news agencies reported that seven prisoners were executed in the past three days in Mashhad, Shiraz and Tehran.

The state-run Rokna website wrote on Tuesday, June 7, that three men, aged 30, 35 and 40, who had been sentenced by the so-called Revolutionary Court in Mashhad, north-east Iran, were hanged on Monday in the central prison of Mashhad.

Fars News Agency, which is affiliated with the Iranian regime’s Revolutionary Guards (IRGC), reported on Monday that two Afghan citizens were hanged in a prison in Tehran. It did not give the names of the victims. The agency wrote that at the time of the execution, the regime’s prosecutor in Pardis and the chief of the city’s repressive police force were present.

The clerical regime’s official news agency, IRNA, announced on Sunday, June 5, that two prisoners were hanged in public in Shiraz, southern Iran. The two prisoners were identified as 22-year-old Amin D., and 28-year-old Mojtaba G. They were executed simultaneously in Shiraz.

The latest hangings bring to at least 127 the number of people executed in Iran since April 10. Three of those executed were women and two are believed to have been juvenile offenders.

Ms. Farideh Karimi, a member of the National Council of Resistance of Iran (NCRI) and a human rights activist, last month called for an urgent response by the United Nations and foreign governments to the recent spate of executions and the appalling state of human rights in Iran.

Iran’s fundamentalist regime last month amputated the fingers of a man in his thirties in Mashhad, the latest in a line of draconian punishments handed down and carried out in recent weeks.

There have been more than 2,400 executions during Hassan Rouhani’s tenure as President. The United Nations Special Rapporteur on the human rights situation in Iran in March announced that the number of executions in Iran in 2015 was greater than any year in the last 25 years. Rouhani has explicitly endorsed the executions as examples of “God’s commandments” and “laws of the parliament that belong to the people.