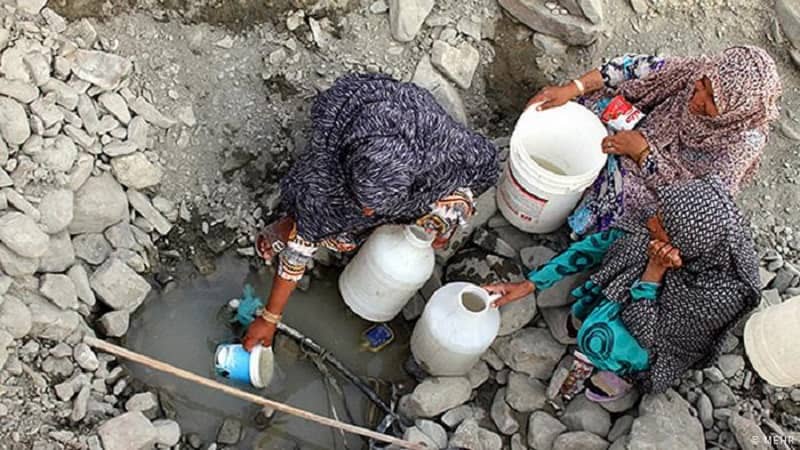 Amid the Covid-19 outbreak, Iranian people are also suffering from a water crisis in different parts of Iran, including water pollution. Many of Iran’s water resources are being dried up due to the regime’s mismanagement.

In Ahvaz, southwest Iran, potable water is highly polluted, and many people have been infected with Hepatitis A, transmitted by water.

“Piped water that reaches people must be in good condition in terms of residual chlorine and turbidity. [Pollution of] drinking water is still a serious problem in the suburbs and cities. Some 50 to 60% of rural water samples are not clear, and in many samples of rural water supply facilities, frequent pollution has been observed in these areas. We have observed 1 to 1.5 meters of mud in 2-meter ponds which causes water turbidity. The facilities should be dredged frequently so as not to increase water turbidity and microbial contamination,” state-run Asr-e Jonoob website wrote on March 9, quoting Mehran Ahmadi Baloutaki, Head of West Ahvaz Health Center.

According to Asr-e Jonoob at least 5 children have been infected with hepatitis in the villages of Ismaili district of Ahvaz. According to Asr-e Jonoob, the cause of the hepatitis outbreak is “the contamination of drinking water and the lack of proper treatment and chlorination in the treatment plants that provide drinking water to dozens of villages on the way from Ahvaz to Khorramshahr.”

Khuzestan province is one of Iran’s richest provinces in terms of natural resources. Yet, the regime pays no attention to this area. In early January, floods in Khuzestan caused damages to people’s lives. Many locals become infected with hepatitis A after consuming water mixed with sewages following the recent floods in this province and the regime’s mismanagement.

“Occasional floods in the cities of Khuzestan and its mixing with sewage, which sometimes spreads to homes, have caused the spread of Hepatitis A among the people of Ahvaz,” wrote the state-run Hamdeli daily on January 12.

“For several months, I was provided with confidential documents from the ABFA company’s archive stating that the health center had reported people contracting Hepatitis A. In other words, the mixing of water and sewage caused intestinal diseases, but these cases were not addressed,” Hamdeli quoted Mohammad Reza Izadi, the head of the Ahvaz City Council Investigation, Supervision and Inspection Commission.

While many Iranians are suffering from shortage of potable water, many of Iran’s water resources are being dried due to the regime’s mismanagement.

The state-run Vatan-e Emrooz daily reported on Monday: “Iran is one of the most beautiful countries in the world with 140 unique wetlands with an area of more than 3 million hectares. Out of 42 types of wetlands known in the world, Iran has 41 types, but this microclimate and spectacular natural range is being damaged due to recklessness and is the victim of [the regime’s] economic interests.”

“According to scientific findings, wetlands are among the most productive environments in the world and the cradles of biodiversity in the world, which play an important role in the survival of countless species of plants and animals by providing water and early reproductive capacity. Wetlands help to restore the storage of groundwater and act as a filter for natural pollution. Despite the diverse functions of wetlands, unfortunately, due to lack of proper management in the type of maintenance and protection, and ultimately wrong decisions based on political and economic interests, wetlands are damaged,” Vatan-e Emrooz adds.

“Currently, about 90% of the country’s wetlands are drying up, and the destruction of these wetlands will undoubtedly lead to climate change, economic and food insecurity,” Vatan-e Emrooz wrote.

“Today, the population density of many birds that lived in Gorgan Bay has decreased from 1.2 million to 380,000, which is a very important figure. It is happening in an ecosystem and it is an alarm because the service or function of this ecosystem is being challenged and its direct impact on humans is reflected in economic, social, and environmental criteria,” wrote the officials IRNA news agency on January 24.

These disasters are mainly due to the regime’s wrong policies and plundering national wealth for funding its illicit activities. The crises have reached a point that mullahs’ officials are also acknowledging their own devastating role.

“Not even a foreign enemy ruling this country would have been able destroy natural resources and the environment, as what has happened in the past years. We have experienced every kind of ecologic disaster within the last four decades. Prior to this, many of the country’s environmental indicators, such as water were in an appropriate position,” Essa Kalantari, head of the regime’s Environment Organization, told with the state-run ISNA news agency on October 15, 2017.

One of the main reasons for Iran’s water crisis is the Revolutionary Guards (IRGC) constructing unscientific dams, increasing environmental problems. Building a dam on a flooded rived will cause the downstream are of the dam to face water shortage, changing the ecosystem gradually.

With the construction of dams in the whole country, the water output from the dams has decreased. Therefore, the regime’s agents are plundering the water they need from the aquifers by digging deep wells.

The regime’s actions, as the state-run Ebtekar daily wrote on September 6, 2020, are the “final nail in the coffin of the people’s trust. They do not understand, or they ignore, the devastating consequences of this action. It is good for president’s all security entourage to remember that since November 2019 until now what strange things have happened in our society.”