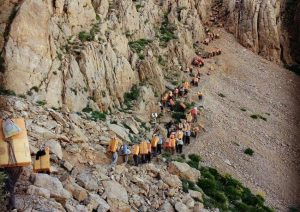 Reports from Iran indicate the Revolutionary Guards (IRGC) forces have shot and killed two border porters, or kolbars, in the northwest and southeast Iran. The regime targets these poor porters, while the IRGC dominates Iran’s smuggling network.

The IRGC forces shot and killed Farzad Saaduzadeh, 41, in Salmas, northwest Iran, on December 6. On December 3, the IRGC forces killed an Iranian Kurdish man transferring fuel in Sistan and Baluchestan Province, southeastern Iran. He was identified as Behzad Mohammadi.

Since border provinces in Iran have the highest rate of unemployment, many locals turn to port goods or becoming kolbars. The regime’s inappropriate division of wealth in these provinces, its lack of attention to the provinces’ economic potential, and the mullahs’ ineffective management are among factor which prompt deprived locals to become porters.

These kolbars have to carry heavy loads, many times on their shoulders, for hundreds of kilometers. Besides the dangers, they endure during their journey in mountains in the northwest, or hot deserts in the southeast, IRGC forces target them regularly without any warning. In other words, IRGC forces hunt these poor porters.

The IRGC kills these porters, claiming it is fighting smuggling. But, the IRGC controls Iran’s largest smuggling network. In 2017, the National Council of Resistance of Iran (NCRI) published a report on this matter.

“State-linked institutions, including the Revolutionary Guards (IRGC), have taken control over Iran’s ports and are meddling in customs affairs, literally transforming these economic centers to transits used to smuggled goods. The IRGC, by taking control over the country’s most important economic routes and establishing a major financial empire, has taken full control over large portions of Iran’s imports/export,” NCRI wrote.

Killing poor kolbars is not part of the regime’s strategy to fight smuggling. That’s because of the mullahs’ control and profit from organized smuggling network.

In December 2019, a 14-year-old boy named Farhad, who was porting goods in northwest Iran, froze to death. Locals in Marivan, in Kermanshah province, took to the streets and chanted ‘Death to the dictator.’

In this regard, the NCRI’s President-elect, Mrs. Maryam Rajavi, said: “The freezing to death of a 14-year-old porter in the mountains of Iran shocks every human being. Instead of going to school, Farhad had to carry heavy loads and work as a porter to earn a living. The clerical regime plunders the wealth of the people of Iran or wastes it on war and suppression. Children of the regime’s leaders are living lavish lives in Europe and the U.S. while deprived Iranian children have to work as porters.”

The freezing to death of a 14-year-old porter in the mountains of #Iran shocks every human being. Instead of going to school, Farhad had to carry heavy loads and work as a porter to earn a living.

“The deprived children of Iran have to work as porters and freeze in the mountains in fear of being pursued by the IRGC. These deprived children are the very forces of rebellion who will uproot the mullahs’ rule,” Mrs. Rajavi continued.

Killing kolbars is in line with the regime’s policy of domestic oppression. In other words, the regime tries to oppress deprived people rather than help them, as part of its strategy to keep the society intimidated.

Since taking power in 1979, the Iranian regime has been using domestic violence as a tool to control a progressive and restive society which has never accepted the mullahs’ rule. Ongoing protests in Iran since 1980, which reached their height in the November 2019 uprising that rattled the regime’s foundations, show Iranians have never accepted this regime.

So, to control this restive society, the regime uses every possible means to oppress people. The international community’s inaction vis-à-vis the regime’s barbarism emboldens the regime to continue its human rights violations.

It is time for the international community to hold the regime to account for its four decades of crime. The international humanitarian values and standards obliges the world community to address human rights violations in Iran immediately to prevent the mullahs’ crimes.