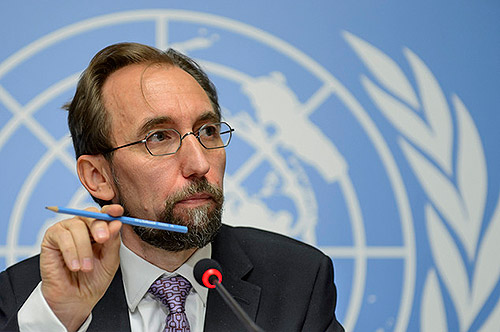 NCRI – The United Nations High Commissioner for Human Rights says he is concerned by the number of executions being carried out in Iran.

“Accelerated use of the death penalty, concerns about the right to a fair trial, and the continued detention of journalists, bloggers and human rights defenders remain a major cause for concern,” UN High Commissioner for Human Rights Zeid Ra’ad Al Hussein said in a statement at the opening of the Human Rights Council session in Geneva on Monday, September 14.

“I urge Iran to make commensurate progress in human rights,” he said.

A statement by the High Commissioner’s office on August 5 said: “Iran has reportedly executed more than 600 individuals so far this year. Last year, at least 753 people were executed in the country.”

More than 2,000 people have been executed in Iran since Hassan Rouhani took office.