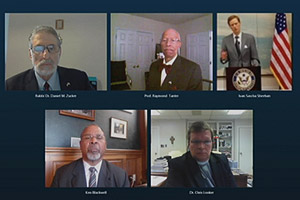 NCRI – On Tuesday, several prominent Americans participated in an online conference hosted by the Organization of Iranian-American Communities (OAIC). They expressed support for an upcoming rally by Iranian-Americans in New York aimed at denouncing Tehran’s egregious human rights record and the presence of the Iranian regime’s President Hassan Rouhani at the United Nations General Assembly.

The rally will take place outside the UN on September 28 and has been organized by the OIAC. It will coincide with Rouhani’s arrival at the UN General Assembly.

“The human rights situation in Iran has deteriorated since Hassan Rouhani took office,” Ambassador Blackwell told an international audience of viewers. “Religious minorities are being persecuted. Independent journalists are being jailed. We should listen to the voice of the Iranian people who seek freedom. We should move towards regime change in Iran. That is the only way that the human rights situation in Iran will improve and the regime’s threat to the international community would be removed. We have an obligation to support the Iranian Resistance that is working to bring down the mullahs’ regime in Iran.”

His remarks were echoed by Prof. Tanter who said the Obama administration needs to open up and reach out to the main Iranian opposition coalition, the National Council of Resistance of Iran and the People’s Mojahedin Organization of Iran, adding that the PMOI and NCRI are the only movements that are feared by the mullahs’ regime.

But Prof. Sheehan pointed to the brutal repression that supporters of these groups face both at home and abroad. Iran’s human rights abuses and support for foreign terrorism present a broad threat to the Iranian people and the world community, but particularly to activists and dissidents, he said.

“The Iranian regime has the highest rate of executions per capita in the world,” Prof. Sheehan noted.

“There have been over 2000 executions during Rouhani’s two-year tenure thus far. Amnesty International has said that the regime in Iran is carrying out a staggering execution spree. Iran has become the largest prison for journalists in the Middle East. The Iranian regime’s human rights record is scandalous. Supporters of the Iranian Resistance will be gathering outside the UN next week to seek a secular, democratic, non-nuclear Iran and they will show the world that there is an alternative to the mullahs’ regime in Iran. There exists a movement, with men and women, young and old, who are willing to bring about regime change in Iran. We need to focus on supporting the aspirations of the Iranian people.”

“Unfortunately the people of Iran are being denied freedom,” Dr. Looker added. “They are being denied the right to liberties and freedom. Members of the MEK (PMOI), such as many doctors, teachers, engineers and students, have given their lives for the freedom of their people. More than 30,000 imprisoned MEK members were massacred by the mullahs’ regime in 1988 alone. [NCRI President-elect] Maryam Rajavi’s 10-point plan for a future free Iran is brilliant and should be supported by everyone. The tenets that the PMOI and the NCRI are advocating should be supported for the establishment of democracy in Iran.”
Speaking to the Iranian people, Dr. Looker said: “There is hope for you. Despite the oppression in Iran, you will achieve your freedom.”

Rabbi Daniel Zucker, Chairman of Americans for Democracy in the Middle East, said: “The importance of the September 28 rally in New York is to call the world’s attention to the nature of Rouhani and his regime. The Iranian regime has not changed since Rouhani came to office. For example, Rouhani’s justice minister is Mostafa Pour-Mohammadi who in 1988 was responsible for the massacre of 30,000 political prisoners. The human rights situation under Rouhani has become far worse than the bad state it was in during the tenure of Mahmoud Ahmadinejad.”