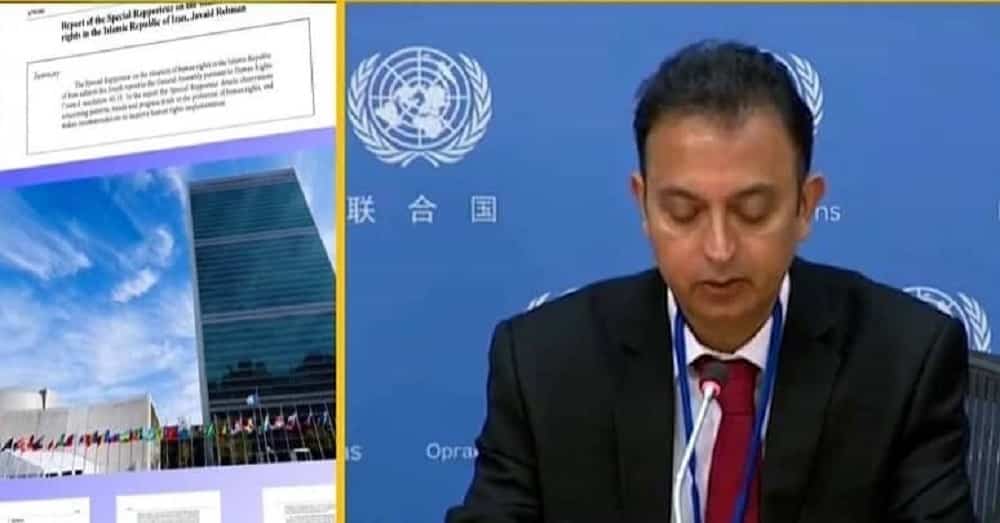 In his report to the United Nations General Assembly, Mr. Javaid Rehman, Special Rapporteur for Human Rights in Iran, expressed concern about the regime’s attempts to destroy evidence of the 1988 massacre. He also underlined that how the regime authorities involved in human rights violations enjoy systematic impunity.

“The Special Rapporteur is concerned at reported attempts by the authorities to continue to destroy evidence of past violations, including the reported mass extrajudicial executions of political dissidents in 1988,” read the report.

In the summer of 1988, the Iranian regime extrajudicially executed over 30,000 political prisoners. Most of the victims were members and supporters of the People’s Mojahedin Organization of Iran (PMOI/MEK).

Mr. Rehman highlighted in his report that, “In April 2021, the authorities issued an order denying Baha’is permission to bury their dead in empty plots in Golestan Javid cemetery, the cemetery designated for Baha’is, forcing them to instead bury their dead between existing graves or at the Khavaran mass gravesite. The latter site is believed to contain the remains of victims of enforced disappearances and summary executions perpetrated in 1988.”

“This order is the latest of the attempts to interfere with evidence of the executions, which have included bulldozing gravesites and the harassment of relatives, such as Maryam Akbari Monfared,[1] who are seeking truth and accountability,” the report adds.

Rehman criticized the regime’s violation of its international obligations, “resulting in a climate of impunity.”

In December 2020, a letter originally sent to the regime officials September by seven U.N. human rights experts, including Mr. Rehman, was published. In their letter, the U.N. experts underlined that the 1988 massacre “may amount to crimes against humanity.”

They also underlined that the international community’s failure to act regarding the 1988 massacre had had a “devastating impact” on the “general human rights situation” in Iran.

The regime’s cold-blooded killing of over 1500 protesters during the major Iran protests in November 2019, the ongoing executions in Iran, and the recent oppression of protesters in Khuzestan province are examples of the “devastating impact” of the world’s failure to hold the regime accountable.  Mr. Rehman underlined in his recent report that “The continued impunity in relation to the disproportionate force used during the countrywide November 2019 protests, and the shooting down of Ukraine Airlines flight PS752, remains emblematic of the state of impunity.”

In June, the systematic impunity reached its climate when the regime’s Supreme Leader, Ali Khamenei, selected Ebrahim Raisi as the regime’s new president. Raisi played a key role in the 1988 massacre, was the regime’s Judiciary Chief during the November 2019 protests, and oversaw the arrest and systematic human rights violations in Iranian prisons.

When Raisi became the so-called “conqueror” of the regime’s sham election in June 2021, Amnesty International’s Secretary General Agnès Callamard underlined that his presidency, “instead of being investigated for the crimes against humanity of murder, enforced disappearance and torture, is a grim reminder that impunity reigns supreme in Iran.”

While protests against Raisi’s presidency continue to spread and rise across the globe, the western powers continue their inaction, fueling the systematic impunity in Iran. The European Union sent one of its top diplomats, Enrique mora, to Raisi’s inauguration on August 5.

Accepting Raisi as Iran’s representative in the world would only allow the regime further increase its human rights violations in Iran. The European leaders should know that the regime’s systematic prosecution and purge of dissidents are not limited to Iran’s borders.

The recent trial of Assadollah Assadi, Tehran’s diplomat-terrorist who had attempted to bomb the opposition rally in France in 2018, is a testament to the fact that turning a blind eye on the mullahs’ domestic violence would have devastating results abroad.

The E.U. is repeating the same mistake in dealing with Iran’s violent regime that it did during World War 2.

As Winston Churchill once said, “An appeaser is one who feeds a crocodile—hoping it will eat him last.” Assadi’s failed bombing in the heart of Europe is a testament to the fact that criminals ruling Iran would devour anything they want if not facing firmness.

The western powers should not recognize Raisi as Iran’s president. They should prosecute him and other human rights abusers for ending the systematic impunity in Iran with its devastating domestic and international impacts.

Previous article
Iran News in Brief – August 24, 2021
Next article
Iranians protest in Stockholm on the 33rd anniversary of the 1988 massacre of political prisoners in Iran