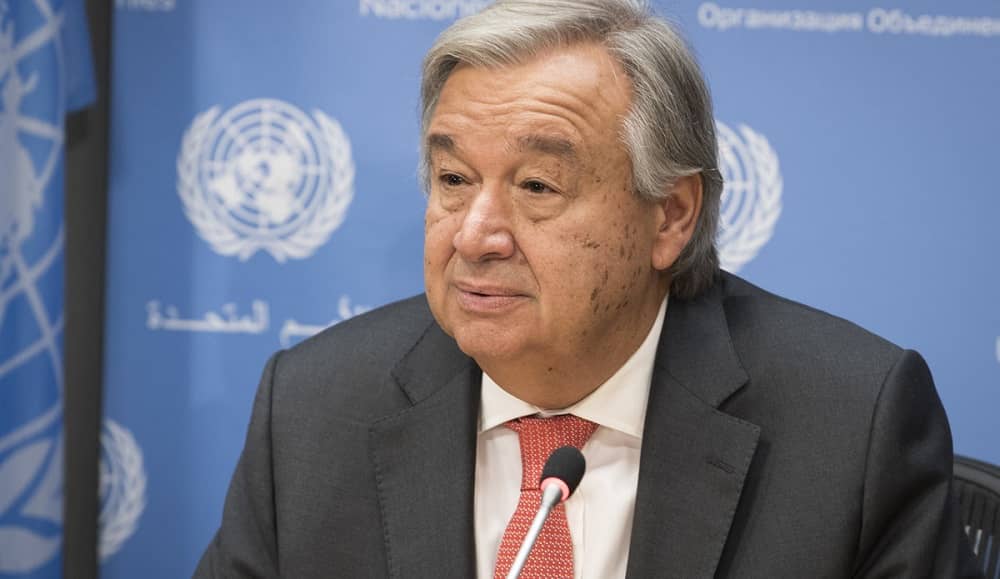 On Saturday, Mrs. Maryam Rajavi, the president-elect of the National Council of Resistance of Iran, issued a statement which welcomed Guterres’ remarks and reiterated a longstanding call for the international community to hold the regime and its leading officials accountable.

The three named officials are, respectively, the regime’s supreme leader, president, and judiciary chief. Ejei inherited his position from Raisi, whom Khamenei appointed to head the judiciary in 2019 and then promoted as president after Raisi.

Raisi’s promotion to the presidency in the wake of oppressing the major Iran protest in November 2019 was the boldest assertion of impunity, given that Raisi’s participation in this crackdown had only highlighted his prior legacy as one of the lead authors of a massacre of political prisoners in the summer of 1988.

Mrs. Rajavi’s statement highlighted that massacre as a particularly notable grounds for international prosecution, noting that it “amounts to a crime against humanity and genocide.” This point had previously been made by scholars of international law and human rights during a conference hosted by the NCRI in August, which also featured hundreds of former Iranian political prisoners and survivors of the 1988 massacre.

Eric David, a professor at the University of Brussels, declared that the massacre, “fulfills all the criteria found in article 6C of the statute of the Nuremberg tribunal, up to article 7 of the current statute of the international criminal court,” justifying its label as a crime against humanity. He went on to note that the documents underlying the massacre demonstrate that its victims were primarily targeted for belonging to “a current of Islam that the mullahs’ regime contested.” This religious motive, together with the sheer scale of the killing, is arguably sufficient to have the 1988 massacre labeled as an instance of genocide and prosecuted accordingly.

Over 30,000 people were killed during the massacre, and some eyewitnesses believe that even this is a conservative figure. In one of 16 video testimonials that were published on the NCRI’s website in advance of the conference, the former political prisoner Mahmoud Royaei stated that “in some prisons, there were absolutely no survivors to give their testimonies about the events,”

Royaei also named Reza Malek, Iran’s deputy intelligence minister at the time of the massacre, as one regime official who gave a higher estimate on his own, namely 33,700.

The complete and precise details of the crime will only come to light in the face of a formal investigation conducted by the United Nations if they come to light at all. Each year sees growth in skepticism about the prospects of a full account of the massacre, largely because regime authorities have been engaged in a gradual but constant process of concealing evidence. Toward that end, they have approved various construction plans on the sites of secret mass graves, as well as intimidating many victims’ families into relative silence.

The UN Secretary General’s report touched upon these issues, by highlighting the case of Maryam Akbari Monfared, a political prisoner who has faced worsening mistreatment since she filed a formal complaint with the judiciary regarding the 1988 massacre, in which she reportedly lost two siblings for being Mujahedin-e Khalq (MEK) supporters purged by Ruhollah Khomeini’s fatwa, which established the mandate for Iran’s “death commissions.”

Four individuals sat on the lead death commission in Tehran, one of whom was Ebrahim Raisi, then the deputy prosecutor for the capital. Several of the former prisoners who provided video testimony to the NCRI recalled seeing him in their prisons. Some described him as demonstrating particular ruthlessness in his systematic imposition of death sentences, thereby suggesting that he helped to set a pace whereby dozens of people were executed on a daily basis during the massacre’s three-month duration, and hundreds each day at its peak.

Raisi’s eventual leadership of the judiciary and of the government itself stand alongside the judiciary’s aggressive response to Monfared’s complaint in signaling that the existing regime has conclusively rejected the notion of accountability for perpetrators of the massacre, as well as perpetrators of other human rights abuses. This in turn underlines the need for accountability at the international level.

Mrs. Rajavi’s remarks prioritized the call for legal accountability but also noted that the Iranian regime and its officials should be made to face other consequences, as well. “Raisi must not be welcome at the upcoming UN General Assembly session,” she said. “The Iranian regime is a leading violator of human rights, the most active state sponsor of terror, and the foremost threat to peace and security in the world today. It must be subjected to international sanctions under Chapter Seven of the UN Charter.”

The seriousness of many relevant crimes, including those perpetrated within the borders of the regime against other Iranians, reportedly allows for them to be prosecuted not only at the International Criminal Court in response to a UN Security Council resolution, but also inside any country that is a party to international law regarding genocide and crimes against humanity. This principle of “universal jurisdiction” was highlighted by the legal scholars who participated in the NCRI’s conference, with British human rights barrister Geoffrey Robertson even arguing that the Genocide Convention obligates Western nations to hold Tehran accountable.

Swedish authorities have already demonstrated the validity of universal jurisdiction with respect to the 1988 massacre, initiating prosecution last month for Hamid Noury, a former prison official, on charges of war crimes and mass murder. The other western nations should follow Sweden’s lead and hold the perpetrators of the 1988 massacre to account.

Previous articleIran News in Brief – September 9, 2021
Next articleIran: Joint Letter of Nobel Laureates to the United Nations Secretary-General Regarding the 1988 Massacre