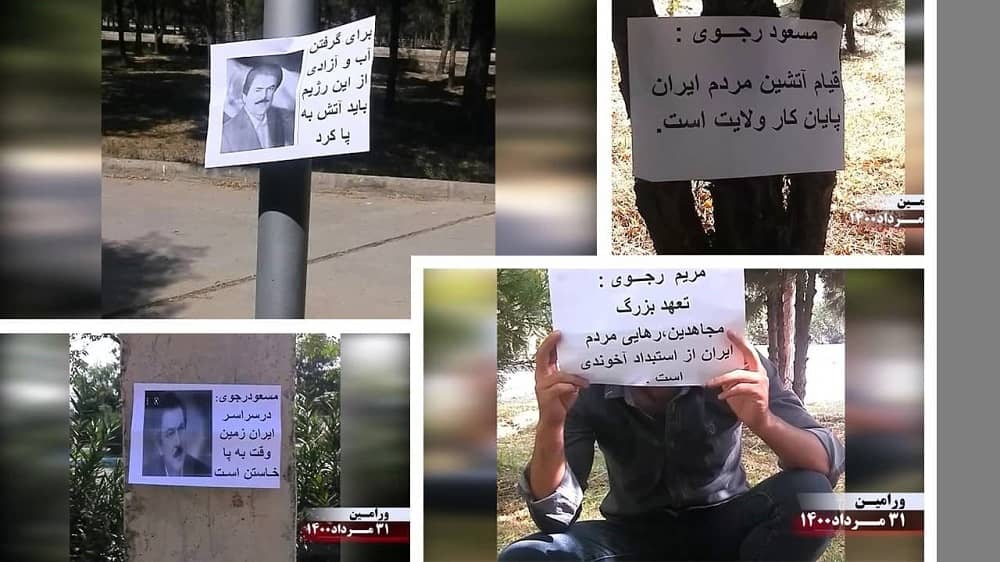 “Maryam Rajavi: The Collection of Murderers and Thieves in Raisi’s Cabinet, Cannot Save the Regime From Its Downfall”

In view of the volatile state of Iranian society exacerbated by the devastating impact of the Coronavirus which has resulted in nearly 400,000 fatalities because Khamenei banned the import of vaccines, the Resistance Units and supporters of the Mujahedin-e Khalq (MEK/PMOI) called for protest and uprising to put an end to the clerical dictatorship as the root of all the problems and suffering of the Iranian people. The MEK Resistance Units posted banners and placards and wrote graffiti in Tehran, Karaj, Tabriz, Sanandaj, Shahrekord, Saveh, Esfarayen, Neyshabur, Fooladshahr, Yazdanshahr, Shahriar, Dezful, Ardakan, and Varamin.

Some of the slogans were: “Maryam Rajavi: The key commitment of the MEK is the liberation of the Iranian people from the clerical tyranny,” “The appointment of Ebrahim Raisi as president is the end of the line for the clerical system,” “Maryam Rajavi: Ebrahim Raisi’s cabinet embodies four decades of the mullahs’ religious and terrorist dictatorship,” “Maryam Rajavi: The collection of murderers and thieves in Raisi’s cabinet cannot save the regime from its inevitable overthrow,” “Massoud Rajavi: It is time to rise up all across the nation,” “Massoud Rajavi: To obtain water and freedom we must overthrow the mullahs,” “Death to the oppressor, be it the Shah or the leader (Khamenei),” “Iranians are vigilant, they hate both the mullahs and the Shah,” “Down with Khamenei, hail to Rajavi,” “Death to Khamenei, long live freedom.”