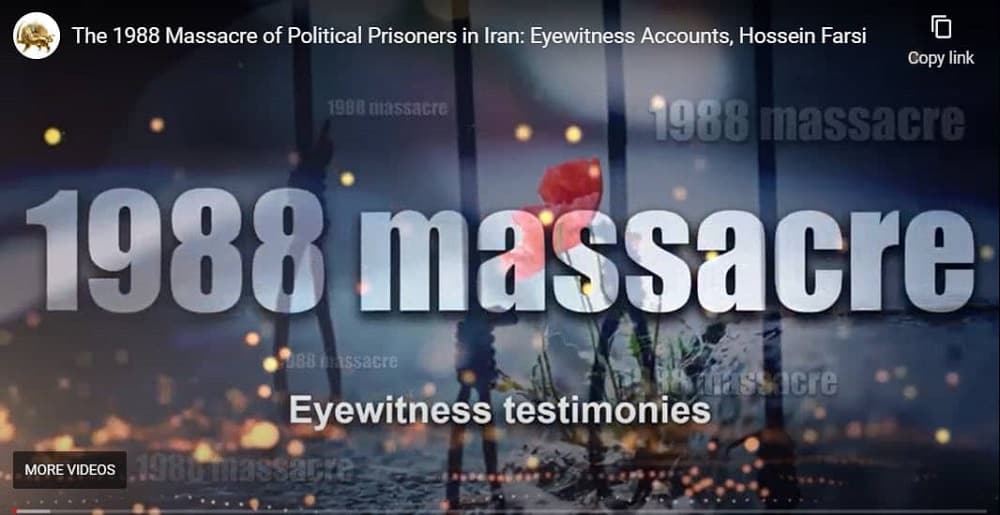 ٰٰThis week, the National Council of Resistance of Iran uploaded a series of videos to its official website featuring eyewitness testimony from persons who had been in prison in Iran during the 1988 massacre of political detainees. For many years, the NCRI has effectively led a campaign for justice on behalf of the massacre’s victims, who are estimated to number over 30,000. But that campaign has taken on a new sense of urgency and timeliness in recent weeks, as Tehran carried out the transition to a new presidential administration, led by one of the massacre’s leading perpetrators.
Many of the individuals featured in the NCRI’s videos specifically recalled seeing Ebrahim Raisi during the interrogations and sham trials that determined who was to be executed between July and September of 1988. Some of those who had been imprisoned in Tehran during the months and years leading up to the massacre also recalled Raisi’s presence in political wards that were subject to his jurisdiction as the deputy prosecutor.
These witnesses provided testimony not just about the 1988 massacre but also about years-long periods of detention following arrest for the “crime” of supporting the People’s Mojahedin Organization of Iran (PMOI/MEK). Today, the MEK is the lead constituent group of the NCRI coalition, and it remains a prime target of Tehran’s domestic repression, foreign terrorism, and propaganda. The overwhelming majority of the victims of the 1988 massacre were supporters of MEK.  Any prisoner who refused to disavow the MEK and persisted in being a supporter or member of the MEK were send to the gallows.

In one of the video testimonials, Hossein Farsi explained that that word alone had been the source of a sharp increase in tensions between inmates and prison authorities, with the latter attempting to violently suppress references to the MEK while enforcing the regime’s violent alternative descriptions of dissidents as “Monafeqin,” or “hypocrites.” According to Farsi, from 1986 onward, prisoners were barred from identifying themselves as Mojahedin and were harshly punished for doing so. “They tortured anyone who used the word,” he said before going on to explain that this was only the beginning of a dawning realization among prisoners about the fate that awaited man of them.
Different eyewitnesses provide different accounts of when they and their fellow prisoners became aware of the massacre, or the underlying plans. Regime authorities made a concerted effort to conceal the early waves of executions by carrying them out immediately after transferring prisoners from one facility to another, thereby making it difficult for individual victims to be accounted for. This difficulty was compounded by the fact that most of those victims were buried in secret mass graves and were executed after having been cut off from contact with families and the outside world for weeks prior to the massacre.

Of course, this and other changes to the prison environment made many of the prisoners aware of the fact that something unusual was happening, though not all of them recognized the changes as targeting the MEK, much less targeting it with the intention of wiping out its members.

Akbar Samadi recalled being taken before the “Death Committee” that oversaw the 1988 massacre, though he was told at the time that it was a “Pardoning Committee.” After being briefly stood before a panel consisting of Ebrahim Raisi and three other individuals, Samadi spoke to another prisoner and said, “If I were to guess, I’d say that they are either going to execute us all or free us all.”Others, however, were seemingly aware of the regime’s plans for mass execution not only while they were ongoing, but months in advance. In another of the NCRI’s videos, Mahmoud Royaei recalled that a fellow prisoner by the name of Parviz Mojahed Nia encountered his family during a transfer on March 21. “The family asked ‘where are they taking you?’ and he told them that they were taking us all to be executed because they had said ‘we are going to seal your fate soon’.”

Royaei and Mojahed Nia both recognized something that not all of the massacre’s victims were able to see at such an early stage: that the transfers and lockdowns which preceded the massacre were evidently designed to sort political prisoners according to their prior affiliations, thereby making it easier to focus attention on the MEK and execute its members at a rate of hundreds per day. This quickly resulted in chilling scenes like that described by Parvin Pouregbal, who was detained in the women’s section of Evin Prison.

“At the time… there were 3 halls,” she said. “In hall number one, on the floor below, all of the women were executed. No survivors. In hall number three, which was the ward above us, all of the MEK members were executed. A number of non-religious prisoners survived. In our ward… each room contained 25-30 people. Two of them were completely emptied.”
Pouregbal’s survival seems miraculous.
Many of the victims’ families were never given official notice of their deaths, and many remain uncertain about their loved ones’ final resting place. The MEK has worked tirelessly to identify the sites of mass graves in at least 36 cities across Iran, but regime authorities have countered that effort with attempts to cover up the history of the massacre by approving construction projects on the same sites and by intimidating victims’ families so as to maintain a veil of relative silence over the issue.
That veil has gradually slipped in recent years, especially following the leak of an audio recording from the time of the massacre in which the regime’s lone dissenter condemned his colleagues for the “worst crime of the Islamic Republic.” Yet even this failed to spark the sort of international investigation that the NCRI has been demanding for so many years. Accordingly, many International Human Rights organizations have accused leading world powers and the United Nations of reinforcing a sense of impunity among Iranian authorities which emboldened them to put forward Ebrahim Raisi as the country’s next president even as Iranian activists publicly labeled him the “henchman of 1988.”