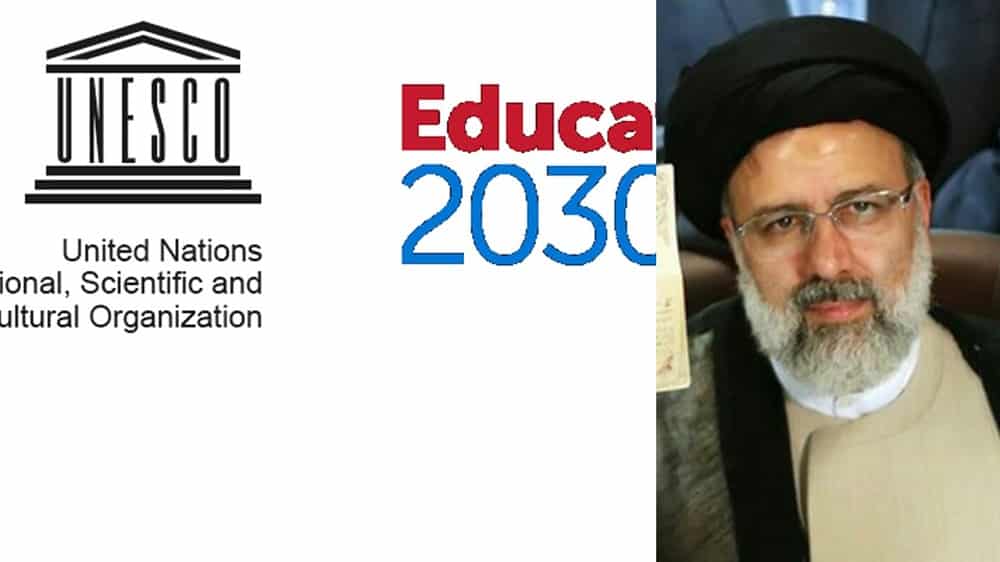 Ebrahim Raisi, the Iranian regime’s president officially canceled the UNESCO 2030 Educational Guidelines. The cancelation was announced by Saeed Reza Ameli, the secretary of the Supreme Council of Cultural Revolution (SCCR) on Monday. In his ruling to repeal the 2030 Document, Raisi called on all documents, declarations, and regulations contrary to fundamental principles of the regime’s education system, the SCCR and the parliament to be canceled for good. “This ruling will be obligatory for all institutions and agencies,” he declared.

Saeed Reza Ameli added: “We have to keep in mind that many international laws are designed within the framework of a liberal thinking structure, and this mindset is based on ignoring the existential role of God and secularism and materialism. Therefore, you do not see education and a cultural system that relies on religious laws and theological regulations. Now we have to see where these are coming from.”

The UN 2030 Agenda for Sustainable Development is a set of standards prepared by UNESCO that teach children and young people the basics of the environment, human rights, and the elimination of discrimination in society. The document was adopted by the UN General Assembly in September 2015 with the aim of improving the quality of education around the world, and member states signed the document agreeing to anticipate the necessary credits for improving education, as well as essential protective measures against child abuse and promoting gender equality.

In a meeting with alleged “teachers” on May 7, 2017, Khamenei blasted the Agenda 2030 and said: “The UNESCO 2030 education agenda and the like are not agendas that the Islamic Republic of Iran should have to surrender and submit to.” He also posted on his website: ‘Why should a so-called “International” community--which is definitely infiltrated by the superpowers—have the right to make decisions for nations around the world regarding their various cultures?’

Earlier that day, 151 members of the regime’s parliament (Majlis) had signed a letter to Hassan Rouhani demanding that the 2030 document be officially withdrawn. According to Ameli, the Rouhani government was sitting on 29 resolutions of the Supreme Council of the Cultural Revolution, which Ebrahim Raisi will now enforce and put into action. The council that was responsible for the crackdown on students and academia since the 1979 revolution is now chaired by Ebrahim Raisi himself.

While different administrations throughout the Iranian regime’s history have mocked international conventions and human rights treaties by violating them in the name of a ‘religious democracy’, canceling and refusing such a commitment in its flimsiest forms just indicates the antagonism between the current rulers and human rights.

Whilst misogynism and systemic oppression of youth and women has been one of the main features of this regime, enforcing the SCCR’s policies by the notorious Ebrahim Raisi is seriously mind-boggling. Coupled with the parliament’s agenda to confirm the internet censorship plan behind closed doors as well as the potential merge of the Ministry of Intelligence with the IRGC Intelligence Unit, it just shows how tight the Supreme Leader wants to hold on to his power.