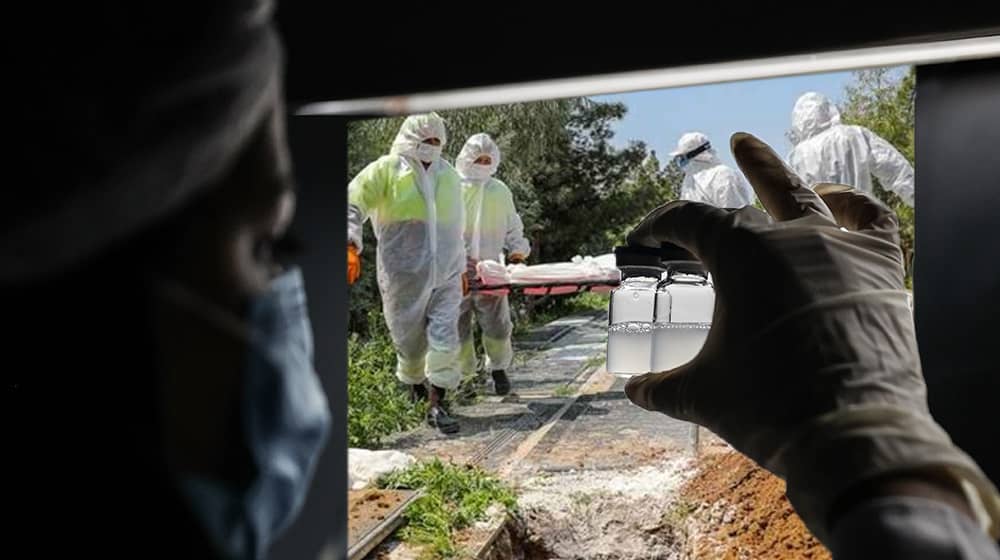 Iran’s Covid-19 crisis deepens daily. This worsening crisis is due to the regime’s inhumane Covid-19 policy. Particularly in January 2021, the regime’s Supreme Leader, Ali Khamenei, banned the credible Covid-19 vaccines. Since his regime’s foundation was rattled by the major Iran protests in November 2019, Khamenei called the deadly Covid-19 a “blessing” and tried to use it for quelling Iran’s restive society. Thus, he ultimately banned vaccines.

Besides, Khamenei persisted in producing “domestic vaccine,” which was later revealed to be another plan to plunder Iranians. In August, Iran experienced the fifth Covid-19 crisis, and the deadly Delta variant spread across the country. With record-breaking death toll per day, Khamenei sensed his ongoing inhumane Covid-19 policy would only increase people’s hatred.

On August 11, he rushed to the TV and said, “[officials] should procure vaccines for people. People should have access to millions of vaccines.” Due to Khamenei and his regime’s criminal policies, over 370,000 Iranian have so far perished since the beginning of the Covid-19 outbreak in Iran.

“The Food and Drug Administration is under heavy pressure to approve domestically produced vaccines and anti-coronavirus medicines. Because obtaining approval from the Ministry of Health means a huge profit for the drug owner,” the state-run Jahan-e Sanat acknowledged on December 14 in this regard. The private companies are all under Khamenei’s control.

One of these companies is Barkat Pharmaceuticals Holding Company. This parent company owns 60.6 percent of the Alborz Investment Group, the second-largest pharmaceutical holding company in the country. Companies in this conglomerate include:

This holding has been tasked with producing vaccines, but the result has been less than 2 percent of the population vaccinated. This holding is controlled by the Execution of Imam Khomeini’s Order, which is under Khamenei’s control. The previous chief of this plundering institution, Mohammad Mokhber, has become the Chief of Staff of the regime’s new president, Ebrahim Raisi.

Now Khamenei has ordered regime officials to procure vaccines. Still, he and his corrupted institutions continue plundering people by monopolizing the production of vaccines and distribution of medication and imported vaccines.

“What is being speculated in the public and media is that in the absence of transparency and the absence of the rule of law, the ban on foreign vaccines claiming prosperity and supporting domestic production has given large amounts of financial resources to certain individuals, institutions, and organizations, connected to specific [officials],” the state-run Hamdeli daily acknowledged on August 16.

“The price of some of the main medications of the coronavirus has increased 12 times – save people from this helplessness,” the state-run Farhikhtegan daily, an outlet close to Khamenei’s faction, acknowledged on August 9. Let’s review the prices of some of the Covid-19 medications, which are scarce and have skyrocketing prices:

Favipiravir tablets: The official price is 120-190 thousand tomans, sold at over 200,000 tomans in the black market.

Remdesivir pills: Their official price is between 700-900 thousand, but they are sold at 12 million tomans at the black market.

Patients should pay between 5 to 70 million per night for a bed in ICU.

“When we visited the customs warehouses of Imam Khomeini Airport. In two warehouses, we saw the condensed medications and raw materials necessary for producing Covid-19 medications,” the regime’s Attorney General acknowledged on August 13.

Yet, he refused to underline that only Khamenei and the Revolutionary Guards (IRGC) front companies can depot medications in custom warehouses. Khamenei and the IRGC played with people’s lives during the Covid-19 outbreak. They have increased the prices of medications, forcing poor Iranian people to sell whatever they have to save their loved ones. While Khamenei uses the Covid-19 crisis to quell the restive society and plunder people, he also increases people’s hatred toward the regime, making another uprising inevitable.

“This situation has gradually put society at risk of depression, obsessive-compulsive disorder, and social anger. The [current crises] do not heal and leave long-term effects. Today, if we do not think of a solution for the near future, we will pay huge costs for it,” Atab-e Yazd daily warned on August 17.

Previous articleEbrahim Raisi’s Cabinet: An Unpopular Set for An Impossible Mission
Next articleIran: The Staggering Coronavirus Death Toll Is More Than 374,300