Iran Election 2021: Calls for Boycott Amplifies as Khamenei Tries To Consolidate His Regime 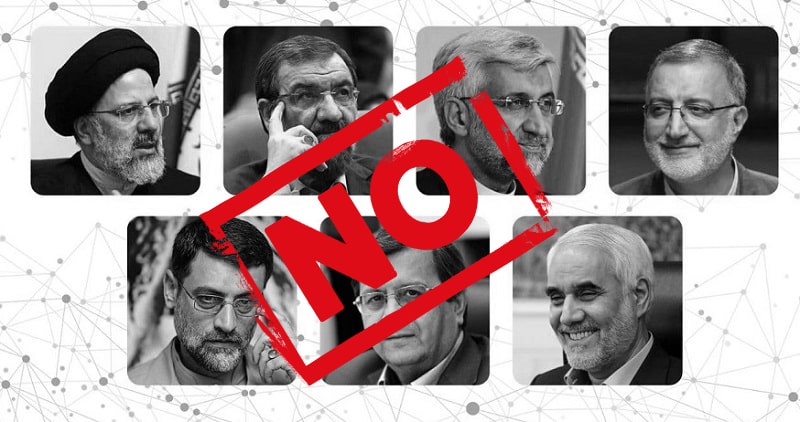 On Tuesday, the Iranian regime’s Guardian Council disqualified many candidates of the regime’s sham presidential election. By purging those loyal to his regime, Supreme Leader Ali Khamenei showed his intention of consolidating power and pursuing his contraction policy to control the restive society and possible uprisings. This massive purge of the regime’s candidates underlines the Iranian Resistance’s statements that the elections in the regime are just a façade. Therefore, many Iranians join calls to boycott the regime’s election in June 2021.

In this regard, Mrs. Maryam Rajavi, the President-elect of the National Council of Resistance of Iran (NCRI) said: “Disqualifying individuals such as IRGC Brig. Gen. Ali Larijani, the architect of censorship and repression, the speaker of the regime’s parliament for 12 years, and always a part of Khamenei’s inner circle, will render the regime’s power base narrower and more fragile, unprecedentedly aggravate the regime’s infighting, and in turn, accelerate the process of implosion and overthrow of the regime.”

Today, there is no longer any excuse to appease and engage with this regime. Any interaction & cooperation with the mullahs will be in service of the regime’s repression and killing of the Iranian people, its nuclear ambitions, and fueling wars in the region. #NoImpunity4Mullahs

“It seems that due to the current situation, and the coronavirus outbreak, there will be low voter turnout in elections,” wrote the state-run Etemad daily on Tuesday.

The state-run media acknowledge that people’s low enthusiasm for participating in the sham presidential election is due to the increasing economic and social crises due to the regime’s actions.

“Hassan Rouhani [regime’s president] worries about the low voter turnout due to his poor performance during the Covid-19 pandemic. Rouhani and all other officials know what kind of election the 2021 election in terms of turnout is. There is high supply but low demand in this election,” wrote the state-run Jahan-e Sanat daily on Monday.

Arman daily on Monday also reflected the regime’s fear of the opposition’s role in spreading the message of boycott among Iranians.

“Opposition TV networks held reunions and discussions in recent weeks about the election. Some [opposition] groups are active on social media, and they are also effective,” Arman daily wrote on Monday.

“When we analyze them, we see they are underlining several issues. One is that reforms within the system of the Islamic Republic are not feasible and can no longer be carried out within this structure. The other is that the people’s vote has little effect on their lives. So these media try to influence people and say that your vote has little effect on your life and when it does not, why do you want to go to the polls?” Arman adds.

Iranians have rejected the regime’s so-called reformist faction during their major uprising in 2018 and 2019 by chanting “reformists, hardliner, the game is over.”

Iranian opposition, mainly the People’s Mojahedin Organization of Iran (PMOI/MEK) and its Resistance Units inside Iran have been playing a leading role in spreading the message of the boycott of the regime’s sham election among the public.

According to the MEK, the Resistance Units network “continued its campaign across the country, calling for the boycott of this masquerade that only serves to justify the tyrannical rule of the mullahs.

According to MEK, “these slogans were spread on various city walls and public places and were widely welcomed by the public. The Resistance Units also installed posters of the Iranian Resistance leader Massoud Rajavi and the President-elect of the National Council of Resistance of Iran (NCRI) Maryam Rajavi with the slogans ‘A strong no to the religious dictatorship, yes to a democratic republic,’ ‘Down with Khamenei, hail to Rajavi’ and ‘Iranian people’s vote is regime change.’

The MEK Resistance Units continue their activities while regime officials have increased security measures to control the society ahead of the election.

“Decreased participation in elections is the enemy’s psychological warfare. Certainly, low voter turnout means we do not have a strong government,” said Mohammad Abdollah-pour, head of the Revolutionary Guards in Gilan province on Monday.

Abdollah-pour then confirmed that due to the opposition’s activities, “Establishing security, increasing participation, making the right choice and maintaining the integrity of the elections are the four missions of the IRGC in the elections.”