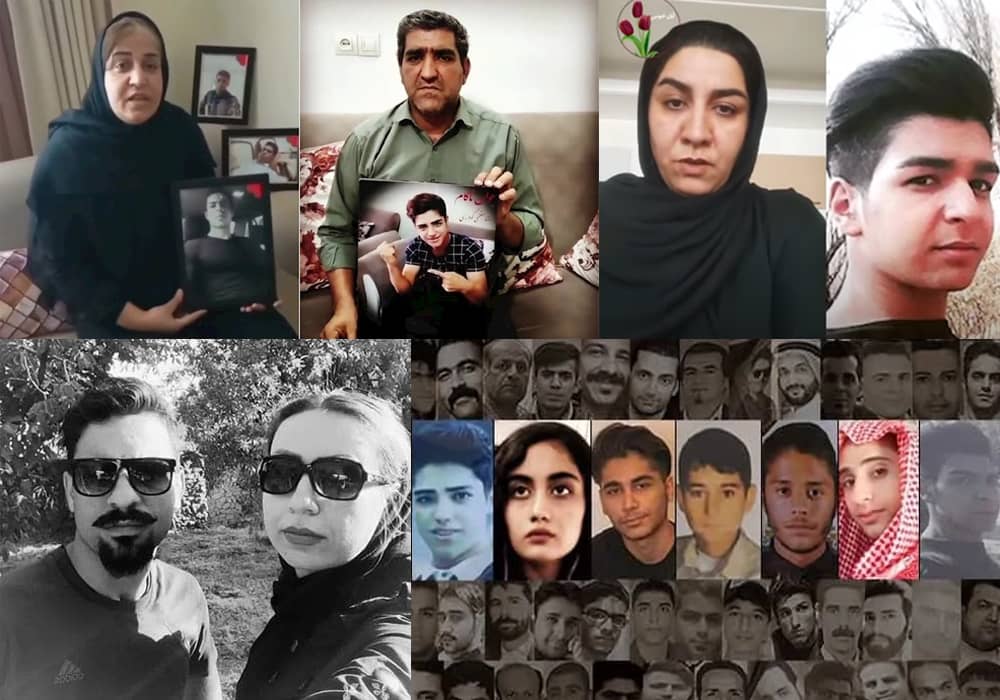 Elham Afkari, the sister of Navid Afkari, Iran’s wrestling champion, executed in September 2020, in a post on Instagram, expressed her decision for boycotting the regime’s election. She underlined that due to the regime’s crime in downing the Ukrainian passenger jet in 2020, killing of innocent protesters during the major Iran protests in November 2019 and the execution of her brother Navid Afkari and mistreatment of her other two brothers, currently detained, she would not participate in the election.

Prior to Ms. Afkari, mothers of the martyrs of November 2019 called for the boycott of the regime’s sham election and underlined their vote is “the regime’s overthrow.”

“For the sake of my son’s bled, shed unjustly, I will neither forgive nor forget. I seek justice for all the young people slain in November 2019. My vote is for the overthrow and annihilation of the regime,” said the mother of Mohsen Jafarpanah, a martyr of November 2019 protests.

“I join with all the November 2019 martyrs’ mothers, and I cry out loud that ‘my vote is for the regime’s overthrow,’” said the mother of Mohammad Taheri.

“For the bullet-riddled heart of my 18-year-old son, for the white hair of the mothers whose children have existed only in a frame for the past 42 years, I vote for the regime’s overthrow,” said Ms. Mahboubeh Ramezani, mother of Iran protests martyr Pejman Qolipour.

“My name is Iran Allahyari. I am the mother of martyr Mehrdad Moinfar, who was killed in November 2019. I will not turn a blind eye to the unjust murder of my only son. I will neither forgive nor forget. They turned my only son into a picture frame. I am suffering. They destroyed my life. For all those grieving parents, all those brothers and sisters who are grieving, I will not vote. My vote is regime change,” said Ms. Allahyari, mother of martyr Mehrdad Moinfar.

“I am the mother of Hossain Ghanavati, who was innocently killed in November 2019 in Behbahan by the Islamic Republic’s security forces. I seek justice for the blood of my son, unjustly shed. We, the grieving mothers [of martyrs], ask you to echo our voice abroad. We, the mothers of November 2019 [martyrs], will not vote. I miss the innocent smile of my son. The Islamic Republic took my loved one from me. I did not have a good day since Hossain died. I do not want anything else; I’m losing my sight. They took everything from me,” said the mother of Iran protest martyr, Hossain Ghanavati.

“I am Amir Hossain’s mother. They took my hope from me. They ruined my world. For the sake of the blood of these children, I ask Iranians that shed innocently in November 2019, do not to vote. Our vote is regime change,” said the mother of Amir Hossain Zarezadeh.

“I ask you people: how could you go and vote. If you want to vote, come and look at Ebrahim’s children, then go vote. Look at the slain youths, look at their grieving mothers, then go vote. I have been grieving for two years, crying with Ebrahim’s children here. Where is government? What government? Shame on this government. People look, Rouhani was in the office, look what they did to people’s youths. What would they do no? Who would they bring to power?” said the mother of Ebrahim Ketabdar, a martyr of Iran protests.

The family members of the Iranian regime’s victims are among many other walks of life in Iran joining the campaign of boycotting the regime’s sham presidential election. In recent days, Iranians abroad have also joined this campaign and echoed calls for regime change in Iran in European countries.

The Resistance Units of the People’s Mojahedin Organization of Iran (PMOI/MEK) have played a major role in popularizing the campaign of boycotting the regime’s sham election since April.

According to the MEK’s website, “The campaign was launched in April by the MEK and is expanding every day. During the whole month of April, these activities were carried out in over 250 areas in 27 provinces. In May, this exceeded in over 310 places in all Iran provinces.”