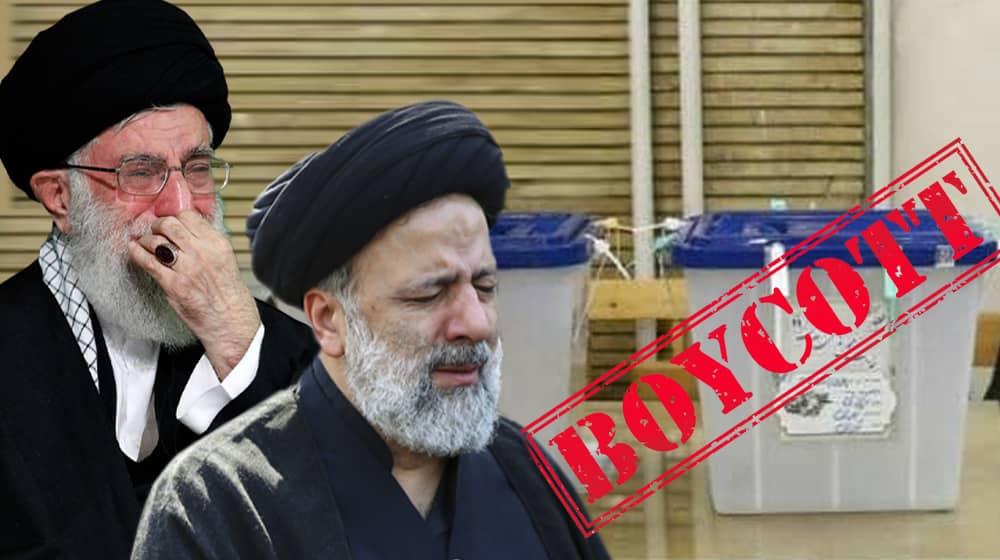 According to reports tallied by the People’s Mojahedin Organization of Iran (PMOI/MEK) at the end of the clerical regime’s election masquerade, less than 10 percent of the eligible voters cast their vote in the sham presidential election. Based on reports of 1,200 journalists and 3,500 video clips from 400 cities obtained by Simay-e Azadi, the opposition TV network, the polling stations across Iran were mostly empty and witnessed a low turnout.

Despite the regime’s efforts, people refused to participate in the elections. The regime officials had told military personnel, employees of the Ministry of Health, Agriculture, and Foreign Affairs, Education, and the staff of state and private banks beforehand that their identity papers must be stamped for voting.

Prison officials in Maku, Khoy, Bazargan, and Salmas told prisoners that whoever votes would receive a three-day leave.  In some other cities, officials tried to purchase people’s votes.

Also, the regime authorities closed some polling stations in Tehran and some other cities to prevent the sparse turnout of very few people and create an impression of mass voter turnout, mainly for western journalists. Dozens of Simay-e Azadi reporters were arrested filming empty polling stations, and their phones were confiscated.

The regime authorities and state-run media had forecasted low voter turnout, warned about its consequences for the regime, and begged people to participate.

The regime’s Supreme Leader, Ali Khamenei, was first to beg people to participate in the sham election. On Wednesday, he acknowledged that the “poor segments of the society are discouraged and dissatisfied and don’t want to vote in the elections.” He also tried to blame the “enemy” for the forecasted low voter turnout and attacked the rival faction. “Some from inside the establishment are trying to dissuade the people. This is wrong. They are spreading hopelessness,” he said.

“If [the people] do not participate [in the elections], the enemy will increase the pressure… If the people’s presence is weak, the establishment will become weaker, and [the enemy] will threaten the country with insecurity and terrorism,” Khamenei warned.

Khamenei’s nightmare became true on Friday when millions of Iranians said no to his regime’s sham election. Khamenei already knew people would boycott the election farce. The only reason he has pulled Raisi, a notorious human rights violator and wanted for crime against humanity in 1988, was to confront Iran’s restive society and the organized Resistance Movement.

The MEK supporters in the United States, Canada, and Europe held daily protests echoing their compatriots’ calls for boycotting the regime’s election farce.

Iranians boycotted the regime’s sham election, renouncing a regime that killed over 1500 protesters in November 2019 uprising and 30,000 political prisoners in 1988.

In daily videos, Parents and relatives of the victims of the November 2019 uprising called for the election boycott and underlined that their vote is regime change.

The Iranian people did not just boycott the regime’s sham election; they have been calling for regime change for years.

Mrs. Maryam Rajavi, the President-elect of the National Council of Resistance of Iran (NCRI) in this regard, said, “The boycott proved and showed the world that the Iranian people’s only vote is to overthrow this medieval regime. The nationwide boycott is the groundswell of the martyrs’ sacrifices and is a reflection of the Iranian people’s great campaign for justice.”

As Mrs. Rajavi underlined, the regime is “in a downward spiral and must be swept aside.” The recent boycott of the regime’s election farce showed Iranian people would continue their efforts to achieve their goal of regime change.