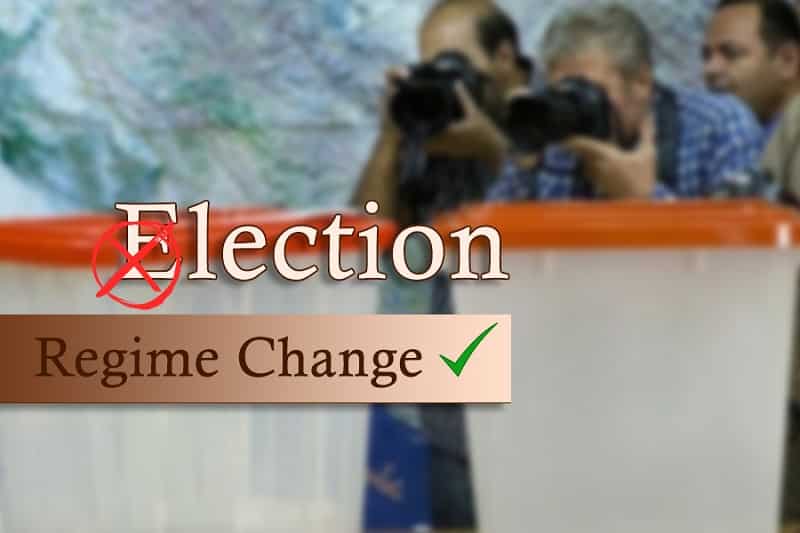 In recent months, Iran’s state-run media have acknowledged that a low turnout in the upcoming sham presidential election will challenge the regime’s legitimacy.

Mohammad-Taqi Mesbah-Yazdi, one of the regime’s top clerics, had said: “Democracy only matters for Western countries. For us, it is just a tool. People’s votes do not bring legitimacy for us. In an Islamic government, people’s vote has no religious and legal validity.  Neither in choosing the type of political system, ratifying the constitution, nor the presidential election, the election of the assembly of experts, and choosing the Supreme Leader.”

“If the low participation in the 2020 [Parliamentary sham] election, which was unprecedented in the last 42 years, repeats in 2021 election, and people elect the head of the 13th government with low votes, the legitimacy of the system will be seriously affected,” wrote the state-run Etemad daily on October 20, 2021.  Etemad underlines that all the regime’s “political currents, organizations, and institutions should look for a solution to prevent a low turnout. Thus, regardless of who from which faction wins the election, the most important thing is the voter turnout.”

According to the state-run Setar-e Sobh on May 11, “only 16 percent of voters participated in the [2020] parliamentary election in Tehran. In other provinces, this figure has been lower.” Meanwhile, many of those who participated would vote out of fear of not receiving their subsidiaries. There are rumors that if people refuse to participate in the election, they will not receive the Covid-19 vaccine.

Mohammad Sadr, a member of the regime’s Expediency Council, considers low turnout a threat to the regime. “If participation is low, it is considered anti-security measures. The opposition, inside and outside the country, is announcing that we should not participate in the elections to undermine the legitimacy of the system,” Sadr said, according to the state-run Etemad daily on May 20.

The state-run Resalat daily on May 20 also underlines: “The current situation targets the system’s security and fuels calls for regime change.”

The regime’s fear of the widespread boycott of the presidential election is the result of the People’s Mojahedin Organization of Iran (PMOI/MEK) and its Resistance Units campaign calling for the boycott of the sham election.

For two months, they have had widespread activities all across Iran and spread the word among all walks of life such that today many Iranians openly state that they will not vote, and their vote is regime change. Recently, a video on social media shows a mother who has lost her 19-years old boy asking people what voting has changed in the last 42 years?

“I do not forgive the unjustly spilled blood of my Mehrdad. My vote is the overthrow of this regime. People, if you vote, you are putting your finger in the blood of your compatriots who were murdered innocently during the bloody November [2019 uprising], like Mehrdad and many others.” said one of the mothers who lost her son in the November 2019 uprising.

“Those who go to the ballot box are complicit with those who did this to us. We will never forgive. Not just those who ordered, recorded, and carried out the order of murdering our children, but we will not forgive those who vote and participate in the elections. Their sin, and the one of those who stay silent in the face of oppression, is not less than those who killed and betrayed our children.” said another mother.

This is the sentiment of the Iranian society and, as the MEK resistance units have announced in their two months of activity, the Iranian people will boycott the regime’s sham elections. Their vote is regime change and the establishment of a democratic Iran.

Previous articleIran News in Brief – May 24, 2021
Next articleOutlook of Iran’s Economic Crises and Regime’s Role in Amplifying Them