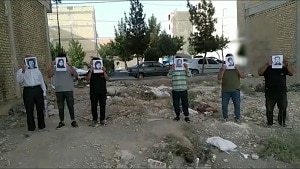 As Iran marks the 34th anniversary of the massacre of more than 30,000 political prisoners in the summer of 1988, Resistance Units, a network of activists associated with the People’s Mojahedin Organization of Iran (PMOI/MEK), are honoring the memory of the martyrs of the Iranian Resistance and pledge to continue their path. In the past week, members of the Resistance Units in different cities carried out activities to stress that the sacrifices made by the martyrs of the 1988 massacre have not been in vain and their memory lives through the rebellious generation of youth that are standing against the regime in every corner of the country. There seems to be a link between the geographical locations and the observed levels of deprivation across Iran. Statistics indicate that the border provinces have the highest rates of unemployment in the country. Drug addiction, divorce, and other social issues are also highly prevalent in border provinces, which is reflective of the unjust and faulty structure that governs them and the insufficient policies of the central government.

The unjust and imbalanced division of wealth within these provinces, the lack of attention to their economic potential, and ineffective management are among the causes behind the poor social and economic conditions of the border provinces in Iran. 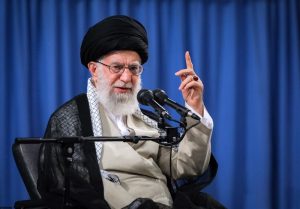 These days, the Iranian regime has been surrounded by enormous dilemmas both inside the country and abroad, while people from different walks of life continue their socio-economic protests across Iran on a daily basis. At the same time, the regime’s mullahs are losing their hopes of further concessions from Western governments through the revival of the 2015 nuclear deal.

In his lecture on July 27, the regime’s Supreme Leader Ali Khamenei emphasized the importance of ‘Friday Prayers’. The regime touted these weekly ceremonies for decades as a sign of public acceptance. However, these state-back shows have failed to attract the regime’s loyalists, let alone ordinary citizens. 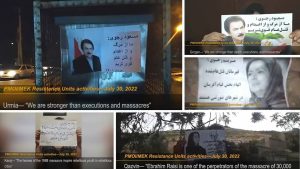 July 30, 2022— The Iranian Resistance Units, a network of activists of the People’s Mojahedin Organization of Iran (PMOI/MEK) across Iran, have been organizing various activities that are louder calls for regime change. The Resistance Units commemorated the massacre of 30,000 political prisoners in the summer of 1988 based on a fatwa by Khomeini. The Resistance Units pledged to continue the path of the martyrs and sent messages of resistance against the mullahs’ regime along with photos of resistance leaders Massoud and Maryam Rajavi.