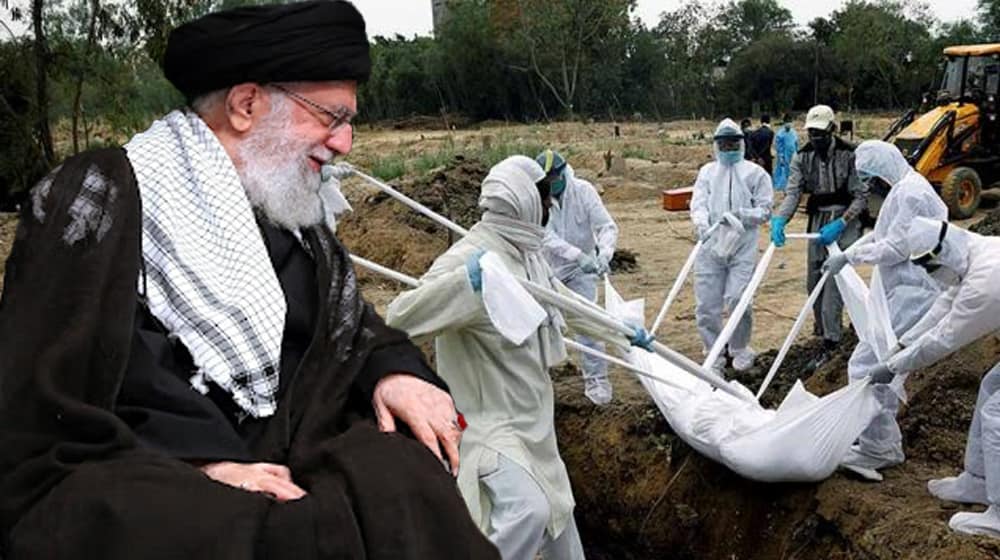 Natural disasters, economic woes, and social crises could happen in any country. But what distinguishes democratic countries from authoritarian regimes is their response to these problems.

While governments make every effort to prevent or reduce casualties of natural disasters or other crises, Iran’s ruling theocracy seems to profit from people’s death and misery. In other words, death is the trademark of Iran’s clerical regime, helping it to survive and thrive.

Flash floods have been ravaging dozens of Iranian cities for the past few days, leaving behind a massive path of death and destruction. According to reports tallied by the Iranian opposition, over 100 people have so far died, and dozens more are missing.

While Iran has suffered from drought for at least a decade, the badly needed heavy rainfall has turned into a catastrophe.

The Iranian regime’s systematic deforestation, digging thousands of wells that have destroyed aquifers, diverting rivers by building dams, refusing to install flood management systems, and refraining from dredging dams and rivers, played a significant role in aggravating the recent flood crisis in Iran.

So far, regime officials have refused to help the victims. They indeed rushed to the scene, but to take selfies while shedding crocodile tears!

“Dressed formally and without bringing relief equipment, some members of parliament, ministers, and the mayor of Tehran attended the flood-stricken areas of Tehran province, especially Imamzadeh Dawood, and took selfies with muddy feet,” the state-run Jomhuri-Eslami daily wrote on July 30.

“These photos drew the ire of users on social media. Some people said that the officials exhibited no concern and anxiety like the people whose homes and lives were destroyed by the flood. There was also no sign of fatigue like the rescuers helping the people. Who on earth would even think of taking a selfie in this situation?”

Although tragic, the recent devastating floods are among the many crises the Iranian regime has created and intensified.

On May 23, the ten-story Metropol Complex in Abadan, southwest Iran, collapsed, killing dozens and injuring many more. Despite numerous warnings by experts about the shoddy construction, the Metropol twin towers were built by Hossein Abdolbaghi, who had close ties with the regime’s Revolutionary Guards (IRGC).

Instead of helping people to find their loved ones and sending equipment to Abadan, the regime deployed anti-riot units that opened fire on and wounded the mourning crows who had peacefully demonstrated, asking for some help.

“We have already identified 33,000 buildings in Tehran, primarily old buildings. There are 947 towers among these buildings, with up to 12 floors. Unfortunately, we have often said that we have 129 buildings in critical condition, which require immediate attention,” Kamran Abdoli, Deputy Fire Protection and Security of the Fire Department acknowledged during his interview with Iran’s state TV on May 27.

In other words, Iranian officials were aware of the eventual collapse of Metropole but decided to ignore it.

The list of crises the clerical regime helped to form and increase is endless. Iran’s Covid-19 crisis is one of these appalling cases. According to the reports tallied by the Iranian Resistance, over half a million Iranians lost their lives as the regime’s Supreme Leader, Ali Khamenei, banned the import of credible American and British vaccines on January 8, 2020. This ban came at the height of the regime’s systematic downplaying of the crisis, even going as far as denying the existence of the coronavirus in Iran for months.

Another prime example of how Iran’s regime profits from crisis and war is the Iran-Iraq war. The regime instigated war and prolonged it under the pretext of “exporting the revolution,” using hundreds of thousands of Iranian children as human waves. This devastating war resulted in over one million victims.

Like a parasite, the Iranian regime plunders the country’s resources and inflicts pain and misery on Iranians. Developing, procuring, and exporting crises, are part of the regime’s survival strategy.

The mother of all crises for the regime is the “crisis of legitimacy.” From day one, mullahs realized that Iran’s young and vibrant society represented serious challenges to the regime’s backward rule. Unable to lead Iran and manage a society with such potential, the mullahs adopted the policy of creating and exporting crises to postpone their regime’s eventual downfall.

But the ongoing protests in Iran by people from all walks of life are the broadest picture of a volatile society that defies the mullahs’ destructive rule. Thus, the nightmare of people’s backlash to their policies and crimes haunts regime officials.