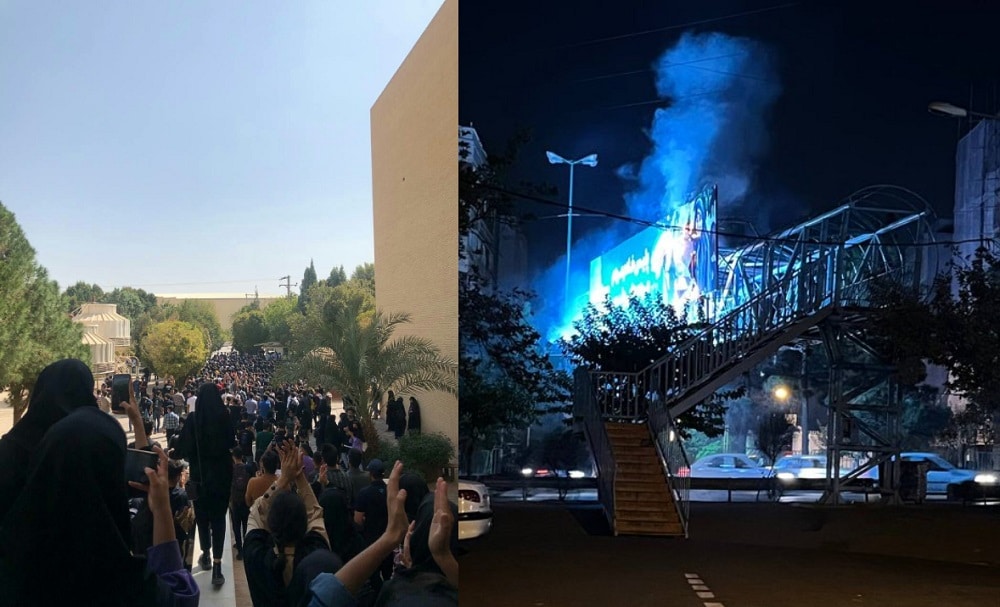 Today, October 5, marked the 20th day of the nationwide uprising and the Iranian people continued with protests and strikes across the country. So far, demonstrations and insurgencies have been recorded in more than 170 cities with 400 martyrs and 20,000 arrests nationwide. According to the latest reports from Zahedan, fighting is still going on in the southeastern city and many on both sides have been killed and injured.

Some reports indicate that the families of the arrested students and other protesters have gathered in front of the prisons to learn about the fate of their loved ones.

#Iran
Responding to their students' protests, a school brought a member of regime's IRGC paramilitary Basij to speak to the girls.
"Basij get lost!" was the students' response.#IranRevolution#MahsaAmini #مهسا_امینی pic.twitter.com/UvJOU9jiby

As the regime is losing millions of dollars every day by shutting down the internet, it is focusing on other ways to prevent the footage covering the uprising to be posted online. According to reports by the Iranian Opposition from various cities, security forces are shooting directly at people with mobile phones who are spotted capturing the scenes of protests and especially the crackdown of protesters. Also many have been arrested for just filming on the street.

Practices that once were exclusive to the brave Resistance Units are now widely implemented across all of Iran. Youth and ordinary people are tearing down posters with images of the regime’s officials or those who showcase the causes the state holds sacred. They also torch statues of the regime’s insignia.

October 5 – Nurabad, Fars Province, south-central #Iran
Protesters torched a square as they continue the nationwide protests against the regime on the 20th night of the uprising.#IranRevolution#MahsaAmini#مهسا_امینی pic.twitter.com/7TJj2Is6dl On the 1000th day of downing the PS752 passenger plane by the IRGC in January 2020, the victims’ families announced in a statement that they will go to the Canadian Parliament “to honor the lives lost and to remind politicians to seek the truth and execute justice.”

The statement said: “Whether you like it or not, this rally is tied to the big developments that are happening in Iran these days, and we hope to hear from the politicians on Tuesday what they think about these developments and what they have done for justice.”

Canadian Prime Minister Justin Trudeau met with some of the families of the victims and assured them that he would work to hold the Iranian regime accountable.

For more on our commitment to holding the Iranian regime responsible for its horrific actions, past and present, please read my full statement: https://t.co/gYmpn4Bjf2

On Wednesday morning, October 5, an earthquake with a magnitude of 5.4 on the Richter scale shook Khoy and Salmas, West Azerbaijan province, northwestern Iran. So far, more than 500 residential houses were damaged and 528 citizens in both cities were injured.

Mohammad Sadegh Motamedian, governor of West Azarbaijan, said: “The preliminary report of the assessment teams shows that more than 500 residential houses have been damaged between 20 and 50 percent, and 50 residential units have been completely destroyed.”

Amir Abbas Jafari, Director General of Crisis Management of West Azerbaijan, said: “528 citizens have been injured in Khoy this morning due to panicing while leaving their homes, and 130 of the injured are currently hospitalized and undergoing treatment.”

Maryam Rajavi: I Appeal to the People of the World To Help the Protesters in Iran 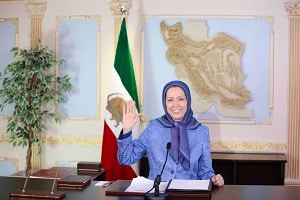 Our people are determined to reject a regime that has kept the country backwards and spends its wealth on terrorism, wars in the region, missile and nuclear programs, and the expansion of its Revolutionary Guard Corps (IRGC) and intelligence services. The clerical regime has condemned women to live in terror and deprived young people of their fundamental rights.

The ongoing protests are the Iranian people’s third uprising this year and the biggest in recent years. These protests have expanded to all 31 provinces of Iran. Murder of an innocent young woman, Mahsa Amini triggered this uprising. 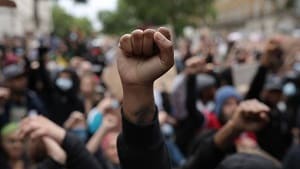 Tuesday marked the 19th consecutive day of nationwide protests in Iran, which have continued despite heavy crackdowns by security forces and the Revolutionary Guards (IRGC). These protests have expanded to 170 cities and all 31 provinces across the country. According to reports gathered by the People’s Mojahedin Organization of Iran (PMOI/MEK), the regime has so far killed 400 civilians and arrested 20,000 others. Tuesday’s protests began with rallies and sit-ins by students in several cities. The students of Gilan University of Medical Sciences rallied while holding placards that read, “Release jailed students,” “Freedom is our right,” and “Ambulances are for the sick” (the regime has been using ambulances as a cover for security forces to apprehend and transfer protesters in secret. The 19th day of protests in Iran continued with high school and university students holding rallies in various cities. High school students chanted “Death to the dictator” while marching in the capital’s streets and other cities.

In Karaj, they chanted, “I will kill whoever killed my sister!” referring to Mahsa Amini, the young woman who died in the custody of the morality police on September 16. She went into a coma for three days after guidance patrols hit her head with successive blows of batons. Her skull fractured, and she suffered a brain hemorrhage.

19th Day of the Iran Revolution, People Defy the Regime Chanting: “Down With the Dictator” Today, October 4, 2022, the 19th day of the nationwide uprising of the Iranian people continues with protests and strikes. So far, the nationwide uprising has been recorded in more than 170 cities with 400 people killed and 20,000 arrests by the regime’s security forces. It should be noted that yesterday the students’ strikes, and the demonstrations continued in more than 50 universities. Yesterday after 18 days, finally the regime’s supreme leader Ali Khamenei broke his silence while fully backing the security forces in killing and arresting the people. The regime’s IRGC, police force, and the Basij militias are leading the crackdown on the protests.

Political Prisoner Sina Zahiri To Be Flogged With 74 Lashes Washington, DC – October 3, 2022: Iranian Resistance Supporters Demonstration in Support of the Iran Protests in Front of the White House

Washington, DC, October 3, 2022: Freedom-loving Iranians and supporters of the People’s Mojahedin Organization of Iran (PMOI/MEK) held a protest gathering in front of the White House to express solidarity with the nationwide Iran Protests. They protested the suppression of the current uprising across Iran.

October 2 and 3, 2022: Gathering in Atlanta and San Francisco in Support of the Iran Protests

Atlanta, October 3, 2022: Freedom-loving Iranians and supporters of the People’s Mojahedin Organization of Iran (PMOI/MEK) held a gathering and candlelight vigil. They expressed solidarity with the nationwide Iran Protests.

Brussels, October 3, 2022: Freedom-loving Iranians and supporters of the People’s Mojahedin Organization of Iran (PMOI/MEK) held a protest gathering in front of the mullahs’ regime embassy to express solidarity with the nationwide Iran Protests. They protested the suppression of the current uprising across Iran.

Previous article
Iran: Spread of Student Protests, Strikes of Teachers and Marketers on 19th Day of People’s Nationwide Uprising
Next article
Iran Protests and Role of Youths: Influenced by Emotion or Determined To Make a Change?