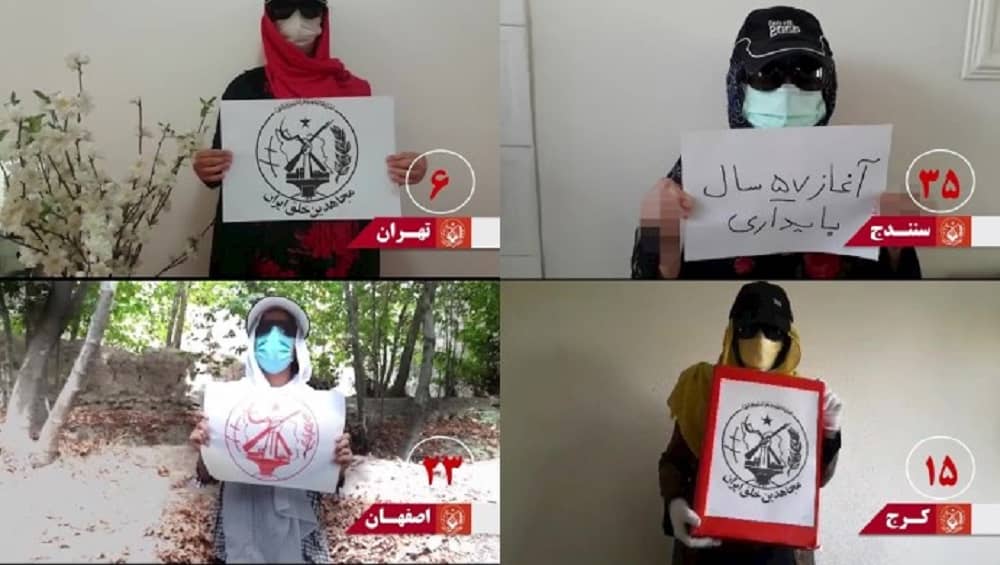 Various groups of working people in Iran took to the streets in major cities to protest their unfair working conditions and the negligence of their rights by officials in the capital and local entities.

September 14 – Tehran, #Iran
Teachers rallying outside the parliament and demand officials live up to promises to adept their paychecks based on their work.
"Teachers are awake and despise empty promises!" they chant.#IranProtests#اعتراضات_سراسری pic.twitter.com/m52Ua9vjdf

Today, Iranians and supporters of the People’s Mojahedin of Iran Organization (PMOI) held a demonstration in Stockholm, Sweden, at the same time as the trial of Hamid Nouri, one of the perpetrators of the 1988 massacre was taking place. Today’s session was dedicated to the hearing of Ramazan Fathi, one of the plaintiffs in the case of Hamid Nouri. 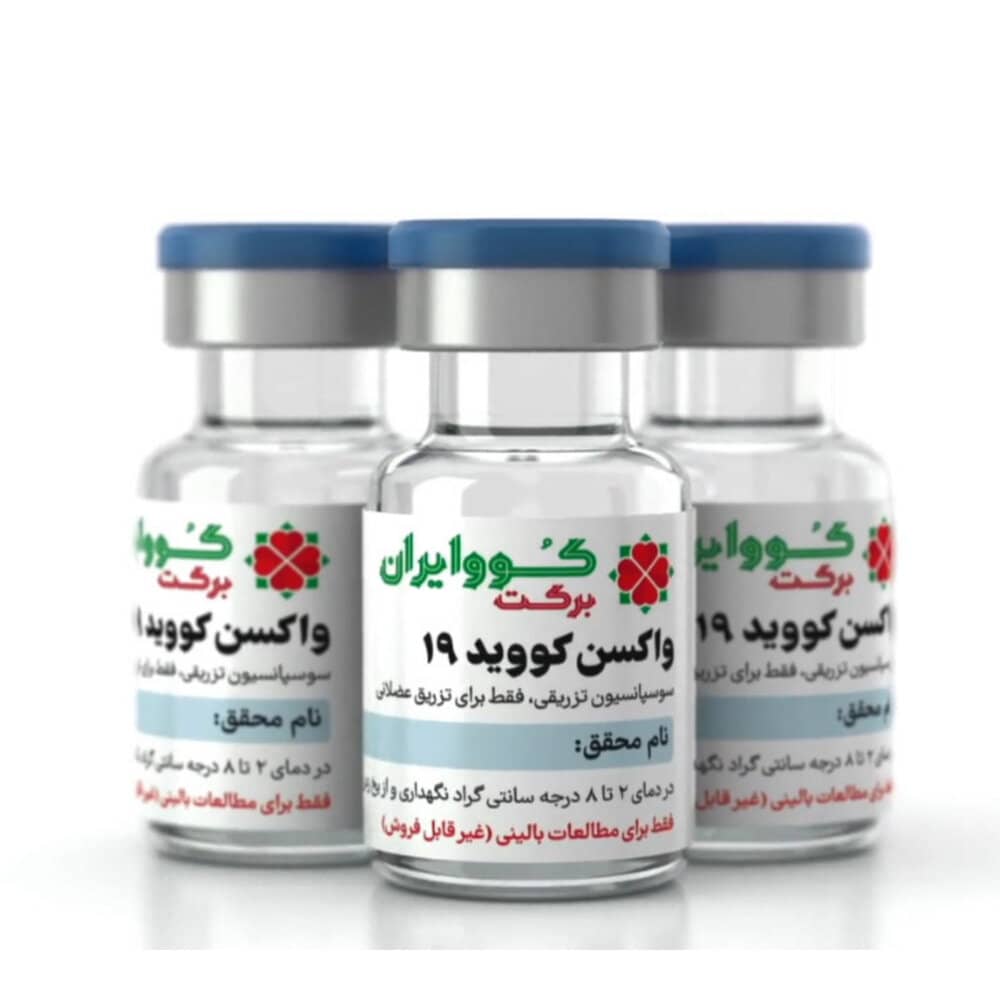 The state-run Sharq newspaper revealed how mafia gangs that monopolized the health industry have blocked the import of credible vaccines against Covid-19, which resulted in the deaths of hundreds of thousands of Iranians. The daily wrote today: It seems that the reason for the unwillingness to buy vaccines from foreign countries was that the Barakat Institute had received 200,000 Tomans for each dose of vaccine. Considering 120 million doses, the company has received over one billion dollars from the government.”

Barakat Institute had previously vowed to deliver 50 million vaccines by mid-September. But Hojjatullah Nikimolki, head of public relations for Setad, Execution of Imam Khomeini’s Order (EIKO), which oversees the Barakat Institute, told the Sharq newspaper: “By the end of the week, the number of doses of vaccines that are going to be delivered to the Ministry of Health will exceed five million.” 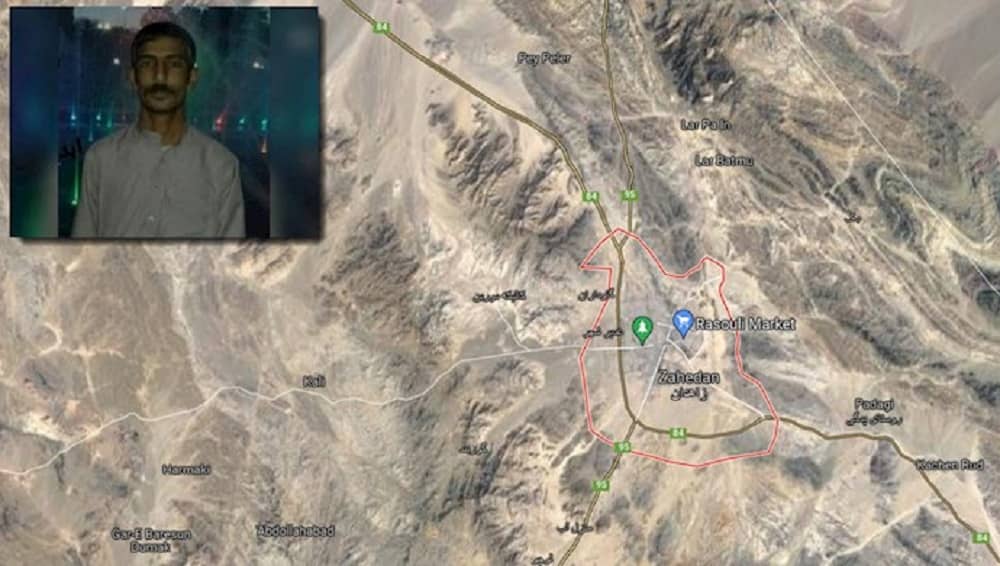 Iranian regime’s security forces chasing of a fuel truck driver in Zahedan, capital of Sistan and Baluchestan Province, led to the shooting and overturning of his car, whereby the driver was killed. The name of the fuel carrier was Dadullah Kiazehi, his father’s name was Karim and he was transferring and selling food for a living. 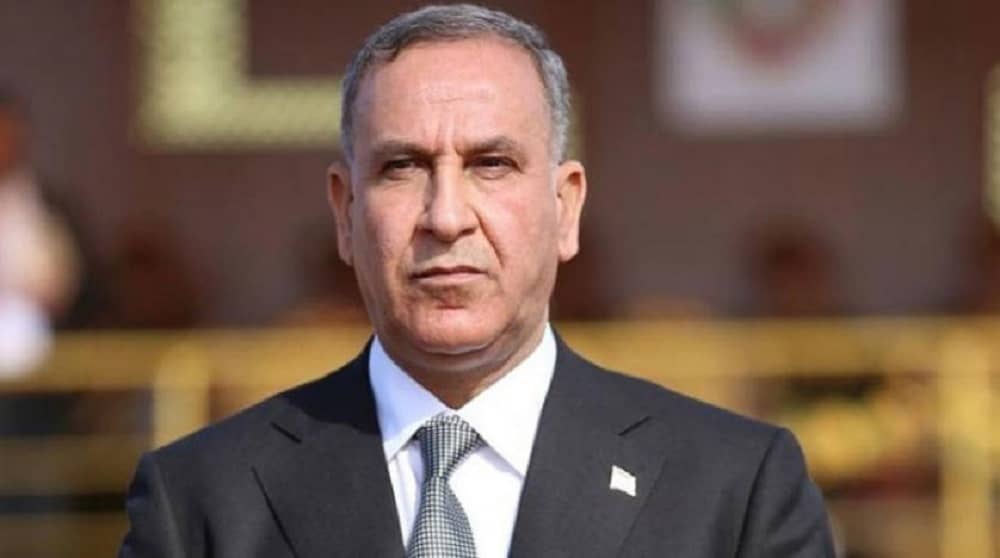 Former Iraqi Defense Minister Abdul Qadir al-Obeidi revealed that more than 10 camps in Syria and Iran were used for training al-Qaeda terrorists that were dispatched to Iraq from 2006 to 2010.

Al-Khaleej Newspaper from Bahrain wrote on September 13: “Abdul Qadir Al-Obeidi has named camps like Ramilan, Al-Askariya, and Al-Nashwa in Syria. Referring to the Vali-e-Asr and Khomeini Camps in Tehran, Al-Obeidi added: “These camps are used for training in terms of installation and neutralization of various explosives, and the Khomeini Camp located at the Ahvaz-Andimeshk road, is used for intelligence training of al-Qaeda operatives.”

The UAE has added 38 individuals and 15 entities to its terror designation list, according to the state-run WAM news agency. The decision, WAM stated, comes within the framework of the UAE’s efforts to target and disrupt networks associated with the financing of terrorism and its associated activities. 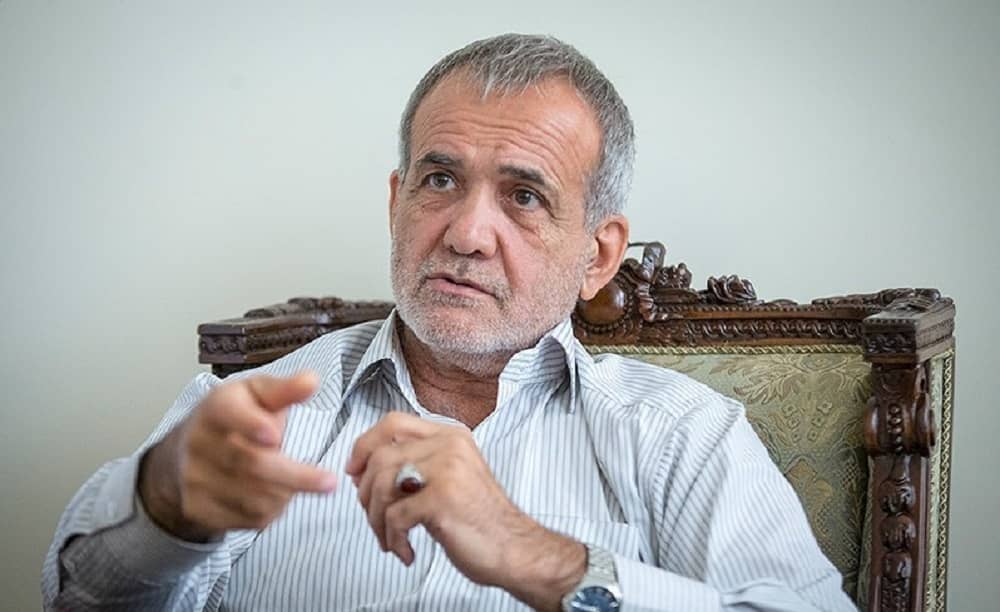 Massoud Pezeshkian, a former member of the regime’s parliament disclosed that the regime is offering fake figures about Covid-19 deaths in Iran and how it failed to prevent the pandemic from spreading throughout the country. According to the state-run Entekhab website, he said: “The very first day that the virus broke out in Qom, they had to enforce a curfew in the city and after a month when the virus traveled everywhere, they had to quarantine the whole country. But they refused to do that.”

“Of course, the actual daily death rate from Covid-19 in the country is over 1,500,” he said, acknowledging the cover-up of Coronavirus casualties by the regime. “If there is a two percent mortality rate among the people who are infected, with 40,000 infected people on a daily basis, we’d have between 800 and 1,200 people who die every day, even if we would have treated and taken care of them properly.” 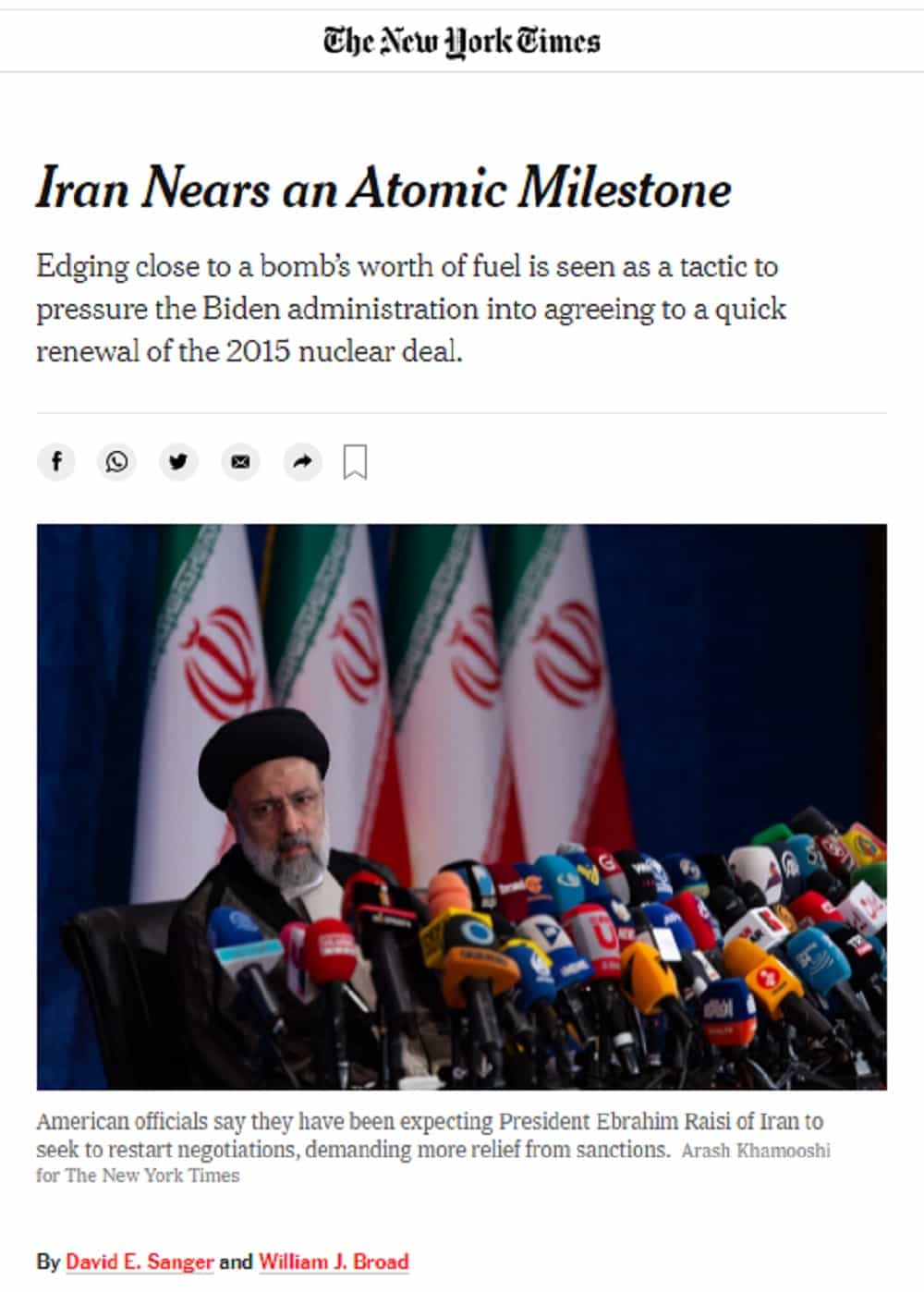 New York Times- Iran has come within roughly a month of having enough material to fuel a single nuclear weapon, crossing a threshold that may raise pressure on the United States and its allies to improve the terms of a potential deal to restore the 2015 nuclear agreement.

The Staggering Number of Corona Victims Is More Than 421,600 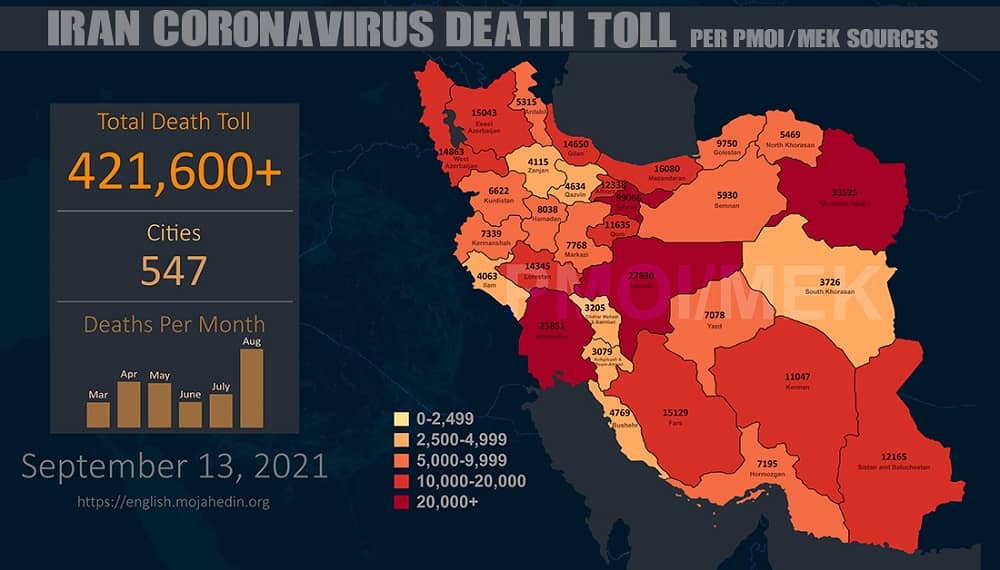 More than 421,600 people have died of the novel #coronavirus in 547 cities checkered across all of Iran's 31 provinces, according to the Iranian opposition PMOI/MEK.

People across Iran continue to send messages of support on the occasion of the founding anniversary of the People’s Mojahedin Organization of Iran (PMOI/MEK). The messages were sent from all Iranian provinces, highlighting the MEK’s growing support among the younger generation despite the atmosphere of fear and repression caused by the regime.

One Year After Executing Navid Afkari, Iran’s Regime Continues To Harass His Family 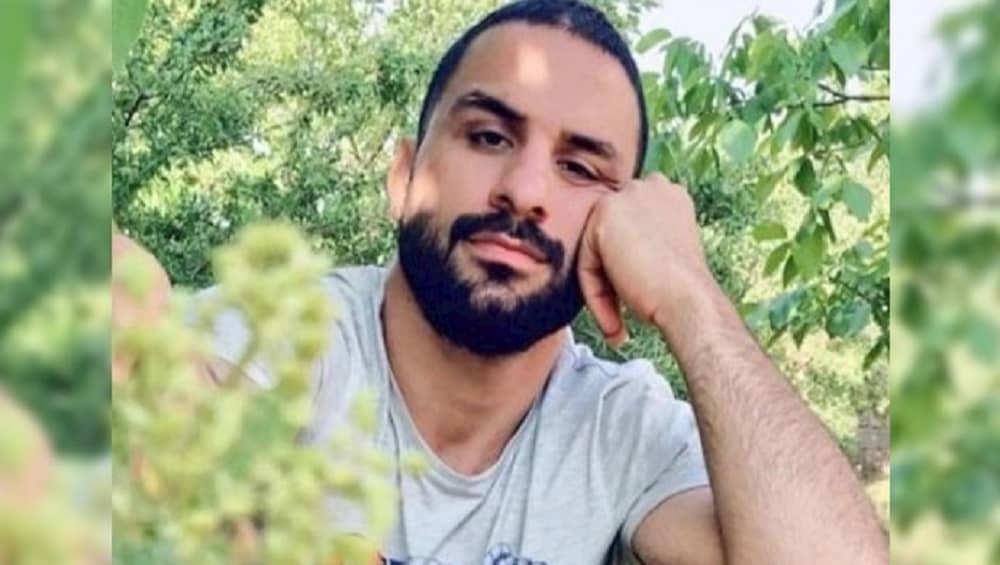 On September 12, 2020, the Iranian regime executed 27-year-old wrestling champion Navid Afkari for taking part in anti-regime protests in Fars province in 2018. On the first anniversary of Navid’s execution, as the Afkari family were preparing to honor his memory, they were subjected to persecution by the regime. Elham and Saeed, two of Navid’s siblings, were stopped by security forces as they were heading to his grave in his native village of Sangar, Fars province. The two were beaten by security forces and Saeed was arrested and taken away.

Can Iran’s Government Blackmail the West This Time on Its Nuclear Case? 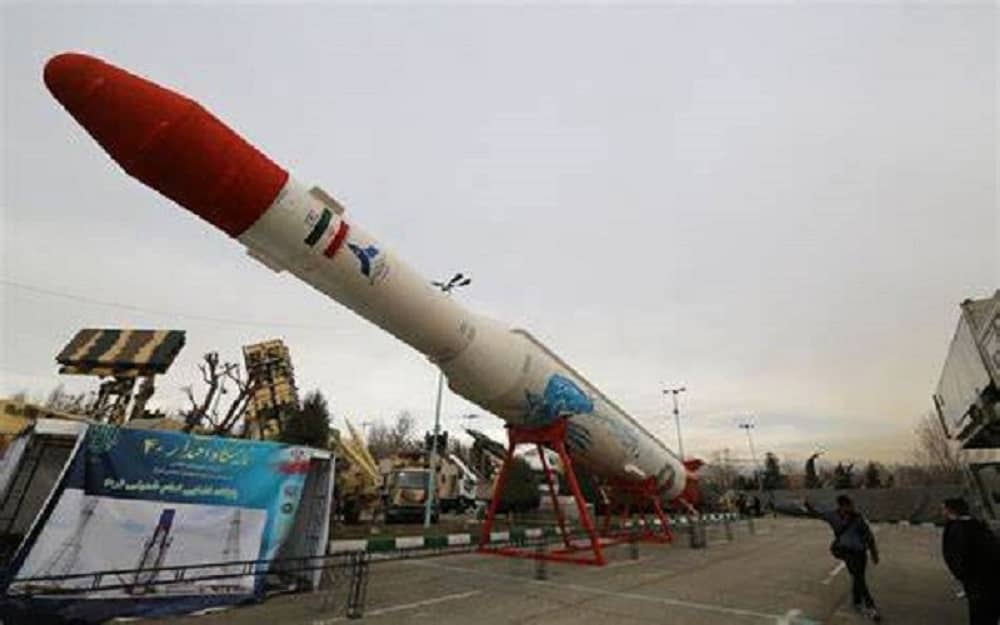 A meeting of the International Atomic Energy Agency (IAEA) Board of Governors will be held in late September to review Iran’s nuclear crisis. Hossein Amirabdollahian, Iran’s foreign minister, said that they would need 2-3 months to decide about the nuclear negotiations. He is pointing to the fate of the 2015 Joint Comprehensive Plan of Action (JPCOA) signed between Iran and major world powers. The U.S. Secretary of State Antony Blinken said that they are reaching a point that the JCPOA would not fulfill the benefits that it should be.

Three Women Hanged in Iran, Bringing the Total Number to 121 Since 2013 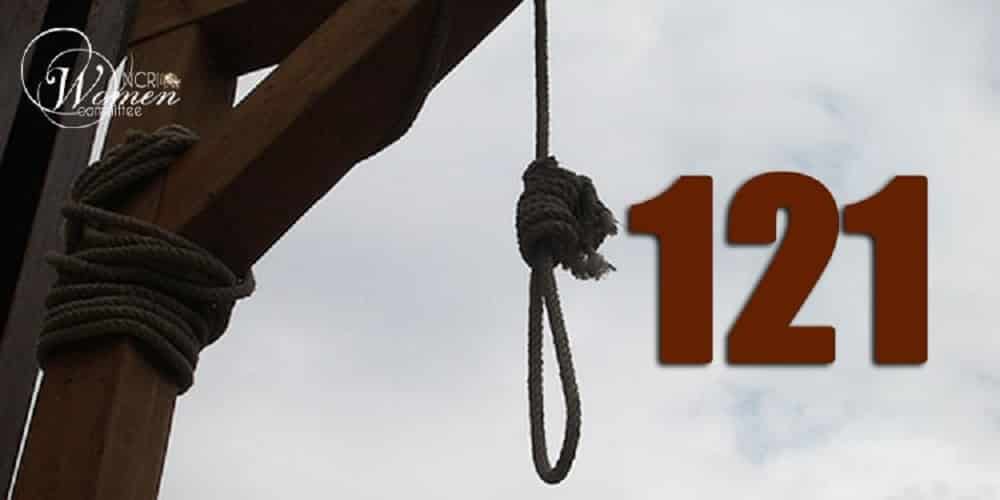 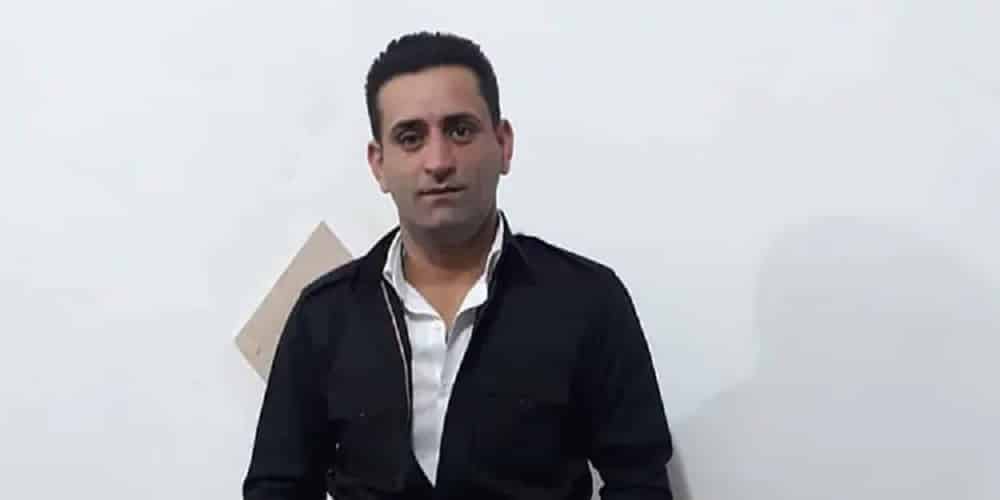 A Kurd political prisoner was killed under torture today in an Intelligence Ministry detention center in Piranshahr northwestern Iran. According to Kurdish human rights groups, the man was identified as 31-year-old Yasser Mangouri, who worked as a lathe operator. Yasser was married and father to three children. His family was informed of his death through a phone call from the Intelligence Ministry. A family member said they were not told how or when he died, and his body was not handed over for a burial ceremony yet. 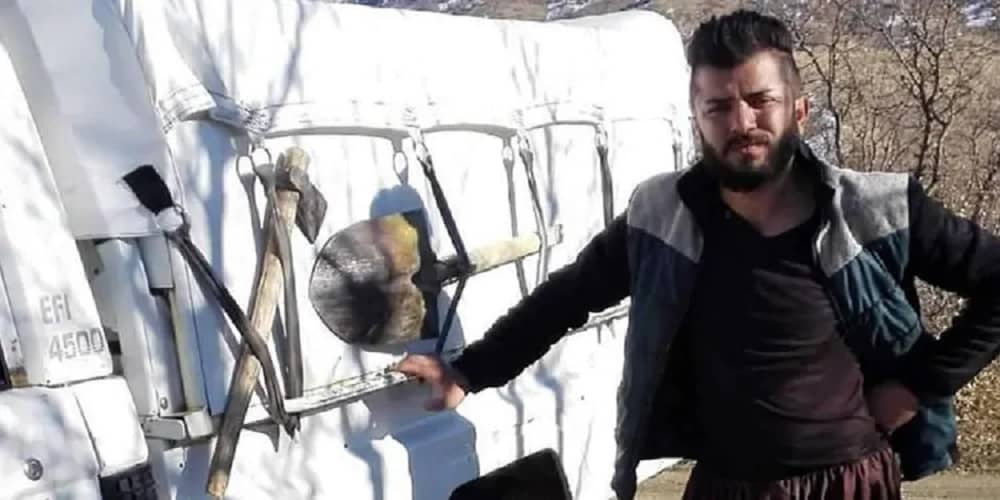