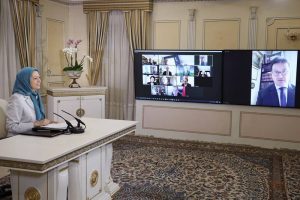 An online conference entitled “Iran prospects, a correct policy” was held by the Parliamentary Committee for a Democratic Iran (CPID) in the French Parliament today, Thursday, April 15.
Michèle de Vaucouleurs, member of the French parliament from the Democratic movement and CPID’s president, saluted the participants and Maryam Rajavi, president-elect of the National Council of Resistance of Iran (NCRI) who was the keynote speaker.
“A general boycott of the upcoming presidential election in June is the population’s natural response to the massacre of 1500 peaceful demonstrators in November 2019 by the authorities,” said the Iranian Resistance’s president-elect.
“Internal problems of the regime prevent them from engaging in serious negotiations on the nuclear issue. For example, during the negotiations, they begin enriching uranium to a 60% level, a clear step in making the bomb. The Iranian Resistance is favorable towards any agreement that can prevent this regime from acquiring the atomic bomb.”

The religious dictatorship uses the massive deaths from the pandemic to prevent a popular uprising. Nevertheless, the prospect of change is more evident than ever because the regime has reached a dead end. It has no solution for economic and social crises. #COVID19 #Iran pic.twitter.com/SVnyiXGzxt

The former Italian minister of foreign affairs Giulio Terzi was another host at the conference.
“We have to leave aside the appeasement policy adopted till today. More serious sanctions than those in place should be applied to make the regime behave correctly,” said the former diplomat.
“During their nationwide uprisings, the Iranian people have rejected the false idea of moderate elements existing inside this regime and have opted for a total regime change,” added Mr. Terzi.
The former Italian minister welcomed the EU’s decision to list eight Iranian authorities as terrorists following their role in the bloody massacre of demonstrators in 2019.
André Chassaigne, member of Parliament from the communist party and CPID’s Vice-president, stressed the role of the organized Resistance inside the country in the face of a regime that would not tolerate any opposition.
“The regime’s wild reactions towards the Mojahedin-e-Khalq (MEK) has no explication other than strong popular support in the country for the MEK. The role of MEK’s resistance units during the uprisings of the past two years has been decisive. MEK owes its presence in the field to its leaders, and you, Mrs. Rajavi, for all these years of perseverance and dedication,” Mr. Chassaigne said.
Frédéric Reiss, member of Parliament from the Republican party, warned about the ongoing negotiations between the 4+1 and the Iranian regime, saying that European negotiators should be vigilant because of the mullahs’ cunning maneuvers.
French senator Bernard Fournier stressed in his intervention that France has to use all its weight to curb the Iran regime’s regional and nuclear ambitions.
Hervé Saulignac, member of Parliament from the Socialist party; Philippe Gosselin, member of Parliament from the Republican party; Brahim Hammouche, member of Parliament from the Democratic movement; and Jean-Michel Clément from the socialist party did also address the online meeting.
A video clip on the social activities of the Resistance units inside Iran was broadcast for the participants.

Previous article
A Glance At Garbage Collecting Tragedy in Iran
Next article
COVID-19 Takes the Lives of 253,100 in 539 Cities in Iran