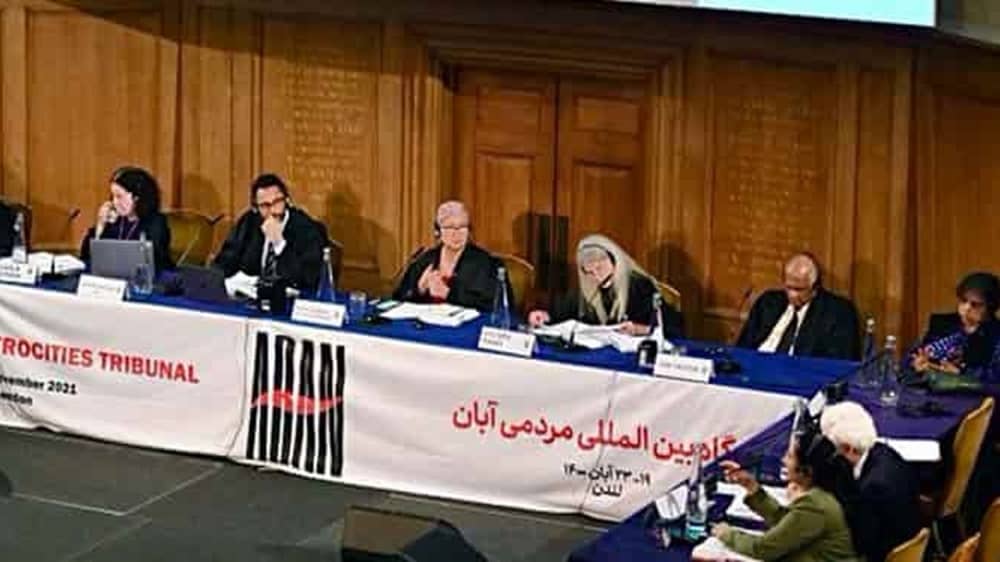 A group of human rights advocates held an International People’s Tribunal, called the “Iran Atrocities Tribunal,” in London. This tribunal, also known as the “Aban Tribunal,” was held to investigate “crimes against humanity” committed by the Iranian regime during its brutal crackdown on November 2019 protests.

Mrs. Maryam Rajavi, the president-elect of the National Council of Resistance of Iran (NCRI), expressed her strong support for the initiative.

Aban Tribunal featured very shocking testimonies of families of victims as well as individuals arrested during and after protests.

“They shot my son while he was standing near a wall,” said witness number 18 in a video call from Iran.

The sister of one of the victims said: “I’m here to defend my slain brother. I cover my face because we are under fierce pressure. They threaten to kill us. Therefore, I cannot show my face.”

“I don’t know why they killed my brother. After a year and a half, they told us my brother was killed by Basij militia, and we shouldn’t follow up on the issue anymore. My brother was shot in the abdomen. He died of excessive blood loss. When he was shot, they prevented people from taking him to the hospital. He suffered for an hour before dying,” she added.

No one in Iran has been held accountable for the killings of hundreds of protesters + bystanders during nationwide protests in November 2019.

“I saw one of the injured protesters at the hospital,” said witness number 109 from Iran. “He was shot in the head. He underwent surgery on his skull, and a quarter of his brain was removed. Regime security officers were present at the hospital and were investigating about him.”

“The interrogator told me I’m your judge. I decide about your fate,” said an Iranian woman who is now outside of Iran. “I was taken to a room. The female prison guard told me: ‘give me your clothes.’ As I gave it to her, then five men entered the room. They were covering their faces. I heard my interrogator’s voice. They started groping me. He said this is your punishment for not accepting to confess on TV,” she said, adding that they sexually abused her. “What was my crime?” she asked while running into tears. Sexually harassing women in prisons has been the misogynous regime’s method to break women.

The witnesses also highlighted the extensiveness and depth of protests during November 2019. People stormed the regime’s centers of repression and plundering. According to the witnesses, regime change was people’s demand.

In a nutshell, the November 2019 uprising portrayed an explosive society that has been yearning for change in the past four decades.

It is worth noting that Amnesty International had documented tortures in the Iranian prisons against detained protesters. The report, called “Iran: Trampling Humanity,” shed light on the regime’s actions and concluded that they had committed further widespread patterns of serious human rights violations.

The Iranian regime slammed the hearings in London. According to the organizers, an unidentified European source told them that Iran’s deputy foreign minister, Ali Bagheri-Kani, had threatened British officials in their meeting on Thursday.

“He had threatened if the [British authorities] do not stop Aban Tribunal, he would immediately halt part of his nuclear negotiations,” the source is quoted to have said. This was later denied by the United Kingdom.

Hassan Norouzi, deputy chairman of the Judiciary and Legal Commission of the Iranian regime’s parliament, also reacted to the public tribunal in London.  When asked by the reporter of the state-run website Dideban about the international tribunal in London and whether it wouldn’t be better if the trial would be held in Iran, Hassan Norouzi said: “What does it mean? What trial?”

Upon the reporter’s explanation about the tribunal in London that is addressing the killings of November 2019 and the negligence of Iranian officials thereafter, Hassan Norouzi answered: “I was one of those who shot the people. We killed! Who is now going to try us? This guy came and burned down the bank, and we killed him. Who do you want to try?”

The remarks sparked a wave of domestic as well as international outrage and condemnation. Norouzi later blatantly claimed he had “joked” and blamed the publication to have faked the interview, connecting them to the Mujahedin-e Khalq organization.

Aban Tribunal coincided with the ongoing trial of Hamid Noury in Albania. Hamid Noury, an Iranian former prison official, was arrested in Sweden in 2019 and is being tried for his role in the 1988 massacre of political prisoners. After 34 sessions of trial in Sweden, the trial is now temporarily taking place in the District Court of Durres, Albania, per prosecutors’ demands. This transfer happened since thousands of members of the People’s Mojahedin Organization of Iran (PMOI/MEK) reside in Ashraf 3, Albania. Members of the MEK were the main target of the 1988 massacre, in which the regime executed over 30,000 political prisoners.

Witnesses at Noury’s trial shared dreadful accounts of atrocities taking place in the Iranian prisons in the early 1980s. Witnesses explained how the so-called “Death Commissions” instantly condemned a prisoner to execution. They also referred to the victims’ bravery, who refused to succumb to the mullahs’ regime demands, much like the brave protesters in 2019.

It is worth noting that one of the four members of the “Death Commission” was Ebrahim Raisi, the regime’s current president. Raisi was the head of Iran’s Judiciary in 2019 and oversaw the systematic human rights violations in Iranian prisons against arrested protesters.

The testimonies at both the Aban Tribunal and Hamid Noury’s trial portray the image of the genocidal regime ruling Iran. They also underline the fact that how criminals in Iran enjoy systematic impunity.

Drewery Dyke, the Aban Tribunal’s judge, underlined that the regime’s current Supreme Leader, Ali Khamenei, the regime’s former president Hassan Rouhani, and Raisi, then-Chief of Judiciary is responsible for the courts held for detained protesters. Instead of being persecuted for their role in systematic human rights violations, they have been holding top positions in the regime.

When Ebrahim Raisi was selected as the regime’s president in June, Amnesty International’s Secretary General Agnès Callamard said: “That Ebrahim Raisi has risen to the presidency instead of being investigated for the crimes against humanity of murder, enforced disappearance and torture, is a grim reminder that impunity reigns supreme in Iran.”

Hamid Noury’s trial and Aban tribunal should set a precedent for the European countries to address crimes against humanity. Holding the regime in Tehran accountable would not only end its decades-long impunity but would certainly limit the regime from committing human rights violations.

The ongoing inaction by the western powers has attributed and increased the systematic impunity in Iran. Therefore, holding the regime accountable would seriously damage this impunity.

As Amnesty International underlined in June 2021, “It is now more urgent than ever for member states of the UN Human Rights Council to take concrete steps to address the crisis of systematic impunity in Iran including by establishing an impartial mechanism to collect and analyze evidence of the most serious crimes under international law committed in Iran to facilitate fair and independent criminal proceedings.”