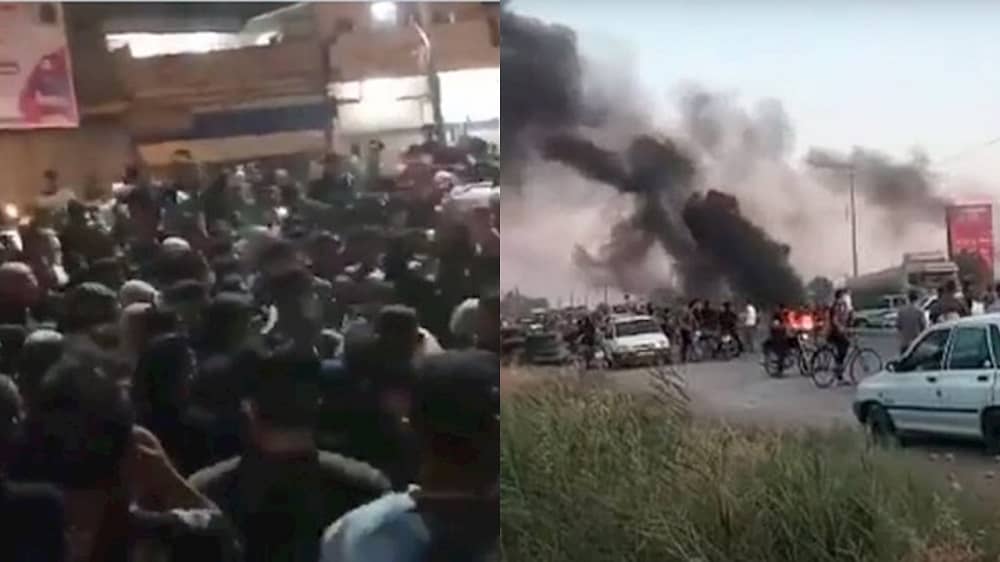 Protests in Khuzestan to water shortages continued on Sunday for the fourth consecutive day. The regime’s plundering and corruption have caused this crisis that now threatens the mullahs’ security.

Simultaneous with protests, Iran state media acknowledged how the regime has created the water crisis and warned about the outcome of these protests. Instead of answering people’s demands, the regime has opened fire on innocent people, killing at least four people, and injuring dozens.

“In recent days, the problem of water shortage in the rivers of Khuzestan, especially Karkheh, has led to problems such as lack of agricultural water and drinking water in rural areas. Yesterday the acting governor of Shadegan reported that one person had been killed during a protest rally in support of protests against the water shortage,” the state-run Hamdeli daily acknowledged on Sunday.

“The water crisis in Khuzestan, which has a temperature above 50 degrees, is widespread. Residents of about 11 cities in the province do not have water to drink, and 700 villages have problems with a water supply and irrigation,” wrote the state-run Resalat daily.

The state-run Setar-e Sobh daily on Sunday acknowledged that “Refusing to listen to the experts and ecologists in the last four decades and building unscientific dams” have created the current water crisis.

“Constructing a highway in the middle of Lake Urmia, the construction of which first began with shovels and pickaxes, after which the decline of the lake began, has caused the lake to not return to its previous state. Also, the dams built above the Karkheh and Dez dams and the manipulations that were done in nature have caused the Zayandehrood river to dry, partially causing protests by farmers nearby,” Setar-e Sobh adds.

The Revolutionary Guards (IRGC) is behind the construction of these unscientific dams. In addition, the IRGC transfers water from Khuzestan to the neighboring countries to profit more. Besides, since the IRGC controls Iran’s industry and economy, it transfers water from Khuzestan to central Iran, so the factories it controls, such as Foulad Mobarakeh Steel Company, continue to work.

“Water transfer for the industries in central Iran is the main reason for the popular protests. Khuzestan is struggling with the problem of drought and severe water shortage,” wrote the state-run Arman daily o Sunday.

“Both farmers and ordinary people are protesting. Right now, from Shush to Ahvaz, many villages face water shortages or have no water, neither for drinking nor even for hygiene,” Setar-e Sobh wrote on Sunday.

Khuzestan is one of Iran’s richest provinces with many natural resources such as oil and gas. Yet, the people of this province are suffering from water scarcity.

“Many of the five million inhabitants of Khuzestan are thirsty, and they need the serious determination of the heads of all three branches to solve the problems of water shortage in this province,” Arman daily adds.

As protests continue in Khuzestan, the state-run media and regime officials warn of their consequences.

“When today hundreds of people in the streets protest drought, and water transfer plan and one person is killed, it reminds us of all of the words of the then-chairman of the National Security Commission in 2018, who said: ‘Water crisis in Iran It has become a security issue,” the state-run Arman warned.

According to Hamdeli daily, “Hassan Shahvarpour, Commander of the IRGC in Khuzestan, spoke at a meeting of the Khuzestan Crisis Management Coordination Council on Friday about the formation of a social crisis.”

“Due to the current water shortage in Khuzestan province, the ground for social crisis is being formed, and social crisis also becomes a security crisis. If [the water crisis is] not managed properly, there will consequence be like the crises of 2018 and 2019 [Iran protests],” Hamdeli wrote quoting Shahvarpour.

“Be very careful about the events in Khuzestan. I smell blood and conspiracy. Open all the water in Khuzestan to quench your thirst and extinguish the fire of [people’s anger],” Ahmad Bighash, one of the regime’s MPs, warned on Sunday.

Previous articleIran: U.S. Senators Call for Blacklisting of Raisi and Khamenei
Next articleIran’s Rising Inflation Rate and Skyrocketing Prices and Their Effects on People