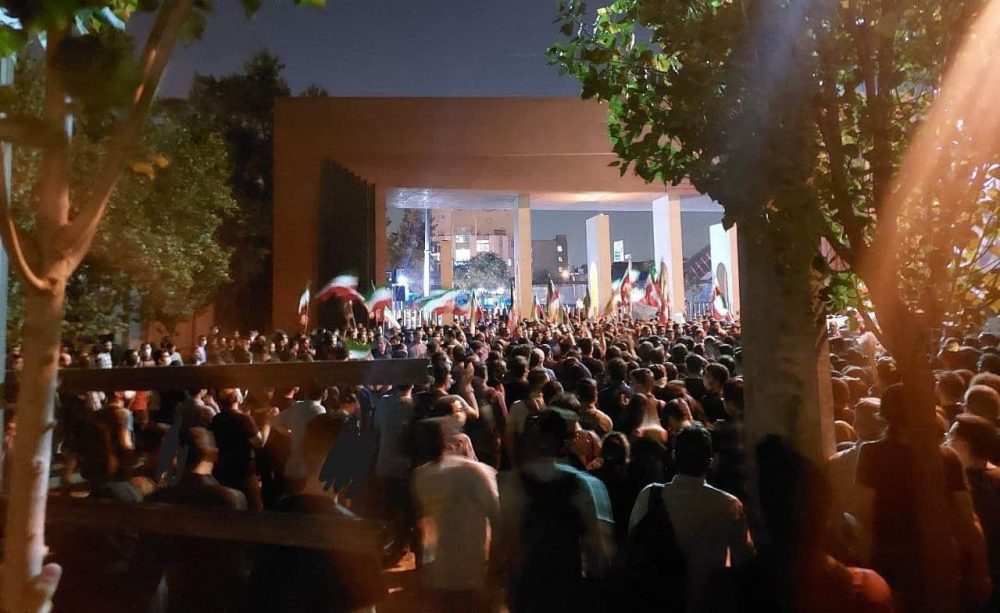 The current protests in Iran appear to be following a very familiar and very significant pattern. When they began on Saturday, they specifically served as a response to the killing of Mahsa Amini and the underlying suppression of women’s rights. The initial protests were also more or less confined to Iranian Kurdistan, where Amini was buried the day after being killed by “morality police” on a visit to Tehran. But since then, demonstrations have spread to at least 100 cities, and in so doing, they have taken on a very broad political message, with participants once again signaling their demand for regime change with slogans like “death to the dictator”.

A number of reports in recent days have referred to the ongoing protests as the largest and most broadly coordinated movement since the 2019 uprising and the protests afterward. The comparison is telling because those protests followed much the same pattern, with participants voicing grievances over the mismanagement of public resources before ultimately expressing the view that these and other problems can best be solved by removing Iran’s theocratic dictatorship and establishing an altogether new system that actually represents the will of the people.

In fact, that pattern of transition from specific to generalized unrest dates back at least to the end of 2017, when flagging economic indicators prompted a major gathering in Iran’s second-largest city of Mashhad, which in turn sparked further demonstrations in surrounding localities. By mid-January 2018, that protest movement had encompassed well over 100 cities. In so doing, it also came to be defined by provocative, anti-government slogans, including “death to the dictator”. That same slogan is prominently featured in the ongoing protests over Amini’s death. As well as condemning the regime’s Supreme Leader Ali Khamenei, the participants in this and other recent protests have also taken to chanting “death to Raisi”.

When Khamenei put forward Ebrahim Raisi as the only viable candidate for the June 2021 presidential election, he did so with the expectation that his madcap sidekick would help to suppress further calls for regime change and expressions of anti-regime sentiment. That expectation was rooted in Raisi’s prior role as one of four members of the Tehran “death commission” during the 1988 massacre of political prisoners, which had over 30,000 victims nationwide. The killings primarily targeted members and supporters of the leading pro-democracy opposition group, the People’s Mojahedin Organization of Iran (MEK/PMOI), which Khamenei acknowledged as a driving force behind the 2018 uprising.

When addressing the issue of Iran, the main question is whether #Iran is really on the brink of a revolution and whether the regime is on the verge of being overthrown? #WeCanAndMust https://t.co/TKC9RjJDDvpic.twitter.com/aHGsO7SQh7

The current protests have been continuing one another. The first seven days’ demonstrations featured some of the fiercest challenges to repressive authorities. Although human rights groups determined that security forces had killed at least 40 individuals, the protesters had also fought back, defending themselves.

The rapid escalation of this week’s protests is certainly attributable, in part, to the simmering tensions that have built up through a series of uprisings and corresponding instances of government repression. The largest of the recent uprisings, in November 2019, met with mass shootings that killed approximately 1,500 people. This did not prevent further large-scale demonstrations from breaking out only two months later, but it has left many Iranians with a strong sense of justice denied for the past three years. Under those circumstances, the profound injustice of Mahsa Amini’s death may have been all that was needed to spark another uprising in pursuit of regime change.

Do u know that in #Iran there are "morality police" roaming the streets arresting #women 4 “bad hijab” #EndVAW pic.twitter.com/TvAre7wMja