Following May Day, Protests Continue To Grow in Iran Despite Regime Repression 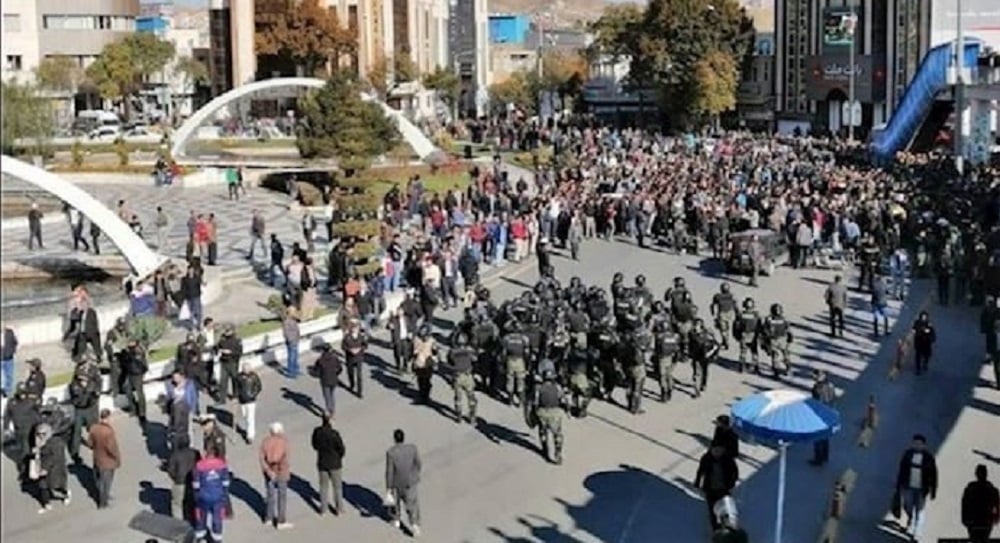 The Iranian regime has seen a new upsurge in popular unrest in recent days, with large-scale protests occurring on Friday in Khuzestan in spite of authorities’ intimidation tactics. Internet access was cut off across large areas, sparking concerns about the possibility of major crackdowns, but this does not appear to have diminished organizing efforts by the main opposition Mujahedin-e Khalq (MEK) and protesters.

The MEK’s parent coalition, the National Council of Resistance of Iran (NCRI), reported on its website that Resistance Units had broadcast slogans and excerpts from speeches of MEK leaders in well-trafficked areas of Tehran and Tabriz on Friday, encouraging popular revolt with the explicit aim of regime change. The broadcast in Tabriz also praised the MEK for “standing with laborers.” Recent nationwide protests were organized by the Iranian Teachers Trade Organization and other labor unions on the occasion of International Workers Day on May 1.

Countless labor organizers took clear aim at the regime’s policies and practices, including its prior arrests of union-affiliated activists. Supreme Leader Ali Khamenei delivered a speech before a hand-selected group of Iranian workers on Monday, and once again attempted to deflect blame for their worsening hardships away from the regime’s policies and toward the influence of Tehran’s Western adversaries.

“All the sanctions were aimed at halting production in Iran. Our workers have stood on the front lines and have not let that happen,” Khamenei said. “This viewpoint is different from that of the system of capitalism and the disintegrated system of communism.”

The state-run Mehr News Agency complemented Khamenei’s effort to credit Iranian workers for undermining US sanctions when it published an article claiming that statistics from the International Monetary Fund show Iran’s economy growing to the 20th largest in the world in spite of those sanctions.

“Despite the imposition of tough sanctions against Iran over the past years, Iran’s economy stood larger than 173 countries in 2021,” the article declared after stating that the IMF’s Purchasing Power Index showed Iran’s gross domestic product exceeding a total value of 1.436 trillion dollars. By comparison, in 2021, Iran’s PPP was just over one trillion dollars, and its GDP in real terms was approximately 682 billion.

If Iranian state media’s account of current year growth is to be believed, it naturally raises questions as to why teachers have been protesting for months over salaries that are below the poverty line, and why the Iranian economy continues to be hammered with crises related to rampant inflation and unemployment.

In fact, these questions have evidently come to be repeated at high levels of government, particularly in the wake of very recent spikes in the price of bread. The National Council of Resistance of Iran reported on these phenomena on Monday and observed that “the situation has reached a point where state media and regime officials, such as Friday prayer leaders who are considered Khamenei’s mouthpieces, criticize Raisi and his government and express fear of a volatile society.”

One state-run daily newspaper, Arman-e Melli, published an article before the May Day protests which said of the administration of President Ebrahim Raisi, “They made such a fuss that one thought they would resolve all problems before taking the government. The inflation will fall, there will be plenty of food, buildings will begin to be rapidly built, and all Iranians will have decent jobs. But none of these happened.”

Another state-run outlet, Eghtesad News, reported on Friday that some members of parliament were actively pursuing a plan to impeach the ministers of labor, industry, and economy, as well as the president himself.

This official frustration with the country’s economy does not, however, appear to translate into counter-pressures against the regime’s emerging crackdown on those who are protesting that very leadership. On Monday, three days after it was reported that internet access had been disrupted on a large scale, a large state security force appeared to be moving into Khuzestan, where residents are beleaguered by the ongoing price increases as well as severe dust storms and water shortages.

Historically, internet blackouts are a precursor to violent repressive measures in Iran. In 2019, when residents of nearly 200 cities staged simultaneous protests over a sudden increase in government-set gasoline prices, internet access was cut off just before the Islamic Revolutionary Guard Corps opened fire on crowds of protesters, killing more than 1,500.

Thousands of peaceful protesters were also arrested during that uprising, and many remain in prison to this day. Accountability for that crackdown has become a major activist cause, with demands for independent investigations and impartial trials sometimes finding an outlet in large-scale demonstrations on other topics, including the plight of Iranian workers and the general economic hardship exacerbated by chronic mismanagement and rampant corruption.

Previous article
Belgian Court of Appeals Upholds Sentences on Perpetrators of 2018 Bomb Plot of Iranian Resistance Rally in Paris
Next article
Iran News in Brief – May 13, 2022