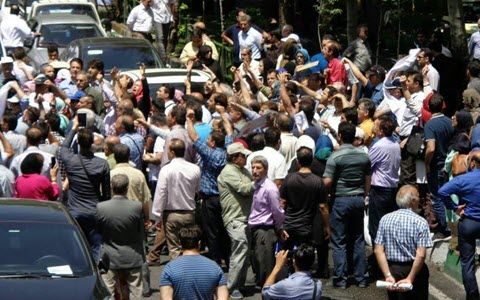 NCRI – Last week’s widespread, nationwide protest rallies held by Caspian Credit Institution’s victims in a number of Iranian cities drew attention once again to the critical condition of the country’s credit institutions and even banks.

The institution is actually one of 7000 scam businesses which, due to having links with the Revolutionary Guards and Khamenei’s office, have been able to get their permits from regime’s Central Bank, which lacks any kind of independence.

The Central Bank in turn has assigned many of such institutions to other banks so as to avoid any financial commitments. The institutions, however, both those assigned to other banks and those that got Central Bank’s permit, grew rapidly during Guardsman Ahamdinejad’s presidency, and could make huge profits thanks to high oil revenues and inflation rate. But following an oil embargo which led to oil revenues being halved, the credit institution refused to fulfill their commitments and declared bankruptcy one after another, so that they now not only pay no interest on investments, but refuse to pay back investors’ initial deposits as well. Meanwhile, the protesters are holding placards in hand which read “we trusted the Central Bank’s permit.”

Regime’s Central Bank, however, claims it’s been able to organize and manage a significant number of such institutions. The reality, however, is something else. There are 7,000 such institutions that, backed by the Revolutionary Guards and Khamenei’s office, have been largely involved in plundering assets of Iranian people for at least the past ten years, and as it could be seen, they are entering into crisis one after the other.

Last year, such institutions like Padideh Shandiz, Mizan, and Samen-al-Hojaj went bankrupt. This year, it’s Caspian’s turn, and while Caspian’s crisis is still not over, Arman and Delfan credit institutions are also faced with widespread protests of their investors.

Actually, due to non-transparent, predatory monetary and financial policies of the government and the Central Bank, such economic parasites are sucking people’s blood and then file for bankruptcy when there’s no more blood left, thus leaving people stranded.

Economic experts believe that such destructive economic policies have triggered a domino effect of bankruptcies in the money market, leading to thousands of billion tomans of people’s assets being lost. (State-run Jamnews website, May 20, 2017)

The result of such plundering will definitely be increased poverty across society. Reducing poverty yet increasing social welfare is the ultimate goal of all governments and human societies. But when this is reversed, it means nothing but deteriorating people economic and living conditions.

In a report published on 24 May 2017, state-run Eghtesad-Online website has quoted regime’s official figures as saying “11 percent of Iran’s population is below absolute poverty line.” 11 percent of Iran’s 80 million population accounts for nearly nine million. Moreover, another 30 percent, nearly 24 million, are below relative poverty line. These, however, are official figures which are much less than the real ones. The report incidentally acknowledges that the rate of people going below poverty line has significantly increased over the past ten years.

In a report on Gini coefficient published on 24 May 2017, state-run Afkar-news has written that the rich earned 177 times more than the poor during 2002-3. Meanwhile, as Mullah Raisi pointed out during presidential election show debates, Iran’s Gini coefficient ranking has moved up seven notches in recent years, another indicator showing that the number of poor in the country is on the rise.

While countries across the world turn to such programs as subsidies, pension funds, co-operatives, and social security so as to reduce inequality and increase social welfare, in Iran under the Mullahs’ regime, however, systematic theft and corruption on one hand, and spending tens of billions of dollars each year for killing Syrian people and supporting Assad’s dictatorship, Houthis, and Shiite militias in Iraq and Lebanon on the other, has imposed poverty on Iranian people.

There are still other issues affecting poverty. A significant part of Iran’s economy is beyond being monitored by government, entities like Khamenei’s office, Revolutionary Guards, and Astan-Quds that have billions of dollars of turnover yet are exempt from paying taxes or responding to any organization. They illegally import 25-30 billion dollars’ worth of contraband, thus phasing out manufacturing and tradespeople.
In a report released on May 22, it’s been pointed out that nearly 10,000 checks are returned each day, meaning that due to a deep recession, tradespeople can’t pay their debts. The latest returned checks figures released by the Central Bank is related to last year’s fourth quarter, during which there were eight million returned checks with a total value of 30 thousand billion tomans, showing a 200 percent increase in value and 60 percent increase in number compared to the previous period. (State-run Rokna website, May 22, 2017)

Like they say, when job goes out one door, poverty comes in from another. One of the area’s most hit by country’s deep economic recession is the housing sector, according to state-run Young Journalists Club. With minus 17 percent growth in the first nine months of last year (2016), some of investors in housing sector have gone bankrupt beyond revival. Rokna’s report points for instance to 43 thousand billion tomans dedicated to housing sector, saying that the recession in the sector is so deep it can’t be resolved with such facilities.