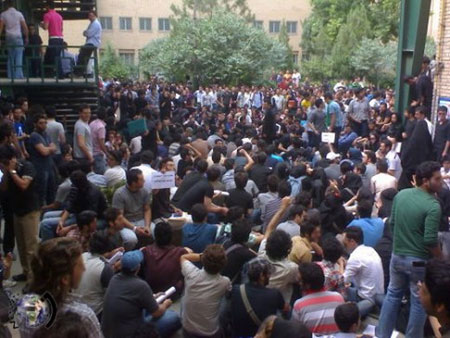 NCRI – Students across Iran have called for mass attendance at a national day of protest against the ‘cruelty and tyranny’ of the regime.

One student group said in a statement: “The history of students and universities is the history of resistance and freedom against cruelty and tyranny.

“We honor and praise the Students’ Day, which is a symbol of students’ resistance. We also call on all our countrymen to join us on this day.”

On December 1, students at Sistan and Balouchestan Universities also distributed statements calling for the active participation of everyone in December 7 gathering.

Their statement read: “This is a remembrance of a saga and resistance which will continue until freedom and equality is established in Iran and will never die out. Students’ Day is our day and it is coming.”

Students at Polytechnic Industrial University in Tehran have called for everyone to join the gathering, but officials have scheduled examinations on the same day to prevent students from attending – despite exams traditionally ending on December 1.

At Arak University, students intend to hold the Students’ Day on both December 6 and 7.

Student Day is the anniversary of the murder of Ahmad Ghandchi, Shariat-Razavi and Bozorg-Nia, three students of University of Tehran who were gunned down by the Iranian police on December 7, 1953 (16 Azar 1332 in the Iranian calendar) in the Pahlavi era. Every year there are local demonstrations at many universities organized by students.