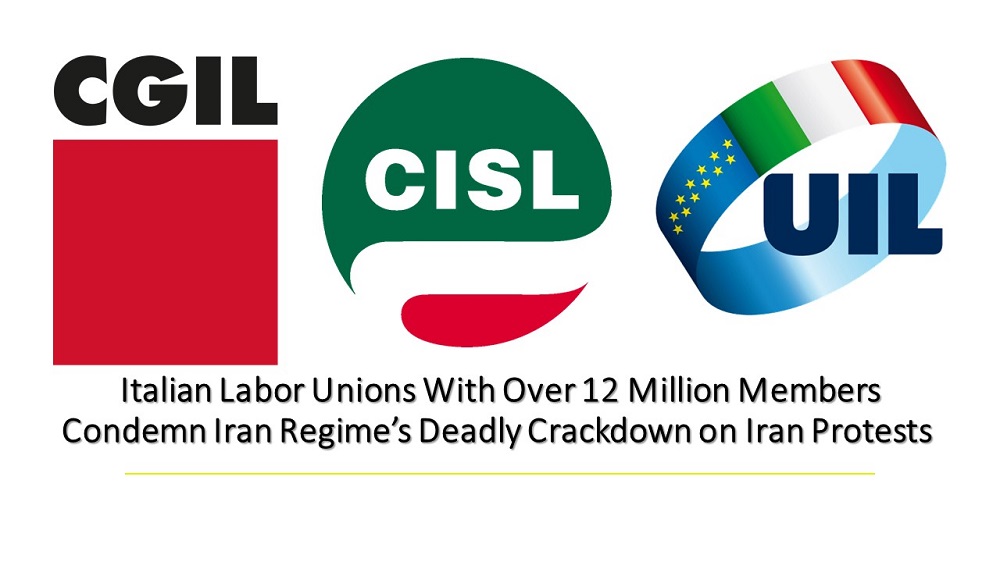 Three main Italian syndicates with over 12 million members sent a joint letter to the Iranian regime’s embassy in Italy on December 10, supporting the recent Iran protests and expressing their concern over the Iranian regime’s excessive use of violence against the protesters. The syndicates and unions were the Italian General Confederation of Labour (CGIL), the Confederazione Italiana Sindacati Lavoratori (CISL) and the Italian Labour Union (UIL).

Their letter to the Iranian regime’s embassy supported “the Iranian people’s recent protests against the gasoline price-hike and their desire to have democracy, social rights, decent income.”

“The Iranian authorities’ deadly crackdown on protesters has resulted in 250 death, 3700 wounded and thousands of arrests,” the letter added.

The Iran protests erupted in mid-November 2019 triggering the greatest and unprecedented crisis in the regime’s 40-year history. Protesters took to the streets in at least 191 cities calling for regime change. The regime has resorted to brutal repression, killing at least 1500 protesters and arresting thousands more, according to the main opposition group People’s Mojahedin Organization of Iran (PMOI), otherwise known as the Mujahedin-e-Khalq (MEK). It also shut down Iran’s internet completely for a week, blocking images of the protests from reaching the outside world.

“The Italian General Confederation of Labour, CGIL, the Confederazione Italiana Sindacati Lavoratori, CISL, the Italian Labour Union or UIL, express their sympathy with the family members of victims and demand the immediate and unconditional release of all the political prisoners, who were arrested during the Iran protests and including youths and workers,” read the letter.

“CGIL, CISL and UIL syndicates, along with the International Confederation of Trade Unions will continue supporting the Iranian people’s legitimate demands respecting human rights and union’s rights,” the unions declared.

They also urged the Iranian regime to “deal with the roots of people’s frustration and social unrests in compliance with the international law.”

The letter was signed by the Italian Trade Union’s International Relations Officers: