Protests in Iran’s Sistan and Baluchistan: Overview and Origins 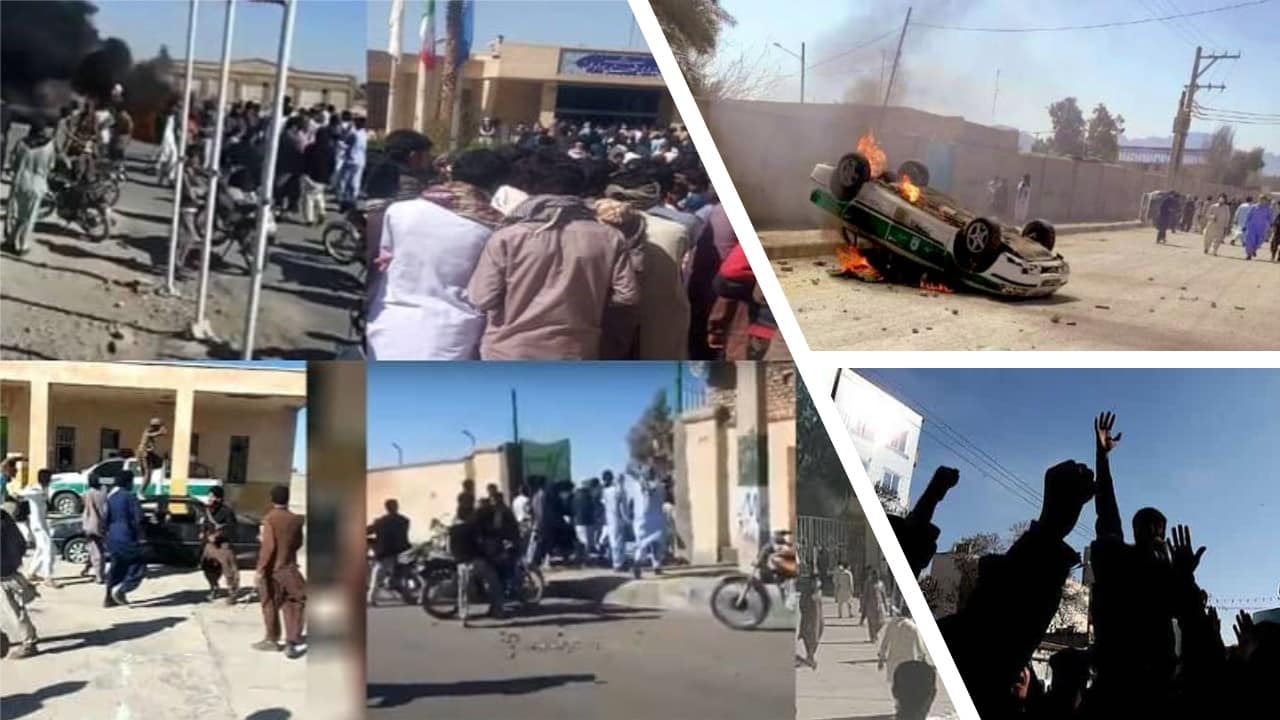 Protests erupted on Monday in Saravan, Sistan and Baluchistan province, southeast Iran, following the massacre of fuel porters by the Revolutionary Guards (IRGC). While these protests continue and have spread to other cities in the province, it is necessary to have a general overview and know the origins of this uprising.

After the IRGC forces opened fire on deprived fuel porters in Saravan county, Protests began on Monday, near the Iran-Pakistan border. In return, angry locals stormed the IRGC base and the governorate. Protests rapidly spread first to Saravan’s surrounding cities and villages and then to other cities in the province.

On Monday, despite the heavy presence of the IRGC forces, protesters attacked the governorate in Saravan. The regime’s security forces opened fire on unarmed civilians killing and injuring dozens of them. In return, people set fire on the security forces’ vehicles.

Protests continued on Tuesday. The residents of Keshtegan village from Bam-Posht district held a rally in front of the IRGC base. According to the Iranian Resistance, The IRGC forces opened fire on protesters, killing over 40 protesters, and wounding a hundred. The regime cut off or disrupted Saravan’s internet to prevent the news of the uprising from spreading. It has also blocked all the roads to the city.

On Wednesday, in the Korin-Sarjangal area of Zahedan, the capital of Sistan and Baluchestan province, poured on streets and targeted the IRGC base in the region. After blocking the road leading to the base, they set fire to several IRGC vehicles.

The regime’s forces opened fire on a group of protesters on Thursday in Zahedan, and the IRGC’s helicopters were flying over the city, trying to intimidate the public. Yet, brave Baluchi locals closed the Jask – Chabahar highway and continued their protests.

While the regime has killed dozens of unarmed protesters, it has tried to blame the victims for the recent killings.

In an interview with the state-run Mashreq News on Thursday, Mehdi Shamsabadi, the regime’s prosecutor in Sistan and Baluchestan, said that the “enemies hiding under cover of fuel carriers” opened fire on protesters. “The [regime’s] enemies intended to inflame the calm atmosphere of the province,” he added. Meanwhile, videos circulating on the internet show IRGC forces killing protesters.

Despite the heavy presence of the regime’s security forces, rebellious youths set fire to the IRGC headquarters in Suran county on Thursday night.

On February 27, Baluchi youths set fire to Ashar district offices, 60 km from Sarbaz city. Locals in Zahedan closed the streets in “Khomeini square” at the city entrance on Friday night. Simultaneously, the people in Asadabad in Iranshahr blocked the roads by burning tires to prevent the IRGC and the State Security Force’s entry.

On Saturday night, locals blocked the Zahak transit highway in Zabul to prevent the repressive forces’ movement. They were chanting, “Down to [regime’s Supreme Leader Ali] Khamenei, down to the IRGC.”

The regime has arrested hundreds of Baluchi youths and deployed its border Security Force at Saravan’s intersections to prevent protests.

Origins of protests in Sistan and Baluchistan

While there have been several protests in the last few years in which the regime has killed the deprived fuel porters, the reason, this time, is the implementation of the so-called “Razzaq” plan of the IRGC.

The IRGC smuggles 15 million liters of fuel a day, earning $6 billion a year. Despite this vast profit, it also plunders the deprived fuel porters’ low income through the “Razzaq” plan.

According to this plan, IRGC has issued a card for some locals in border cities. Thus, every five families have an authorized traffic card, and they must pay 5 million tomans for it. In return, each of these families can cross the border only once a day and once a week, with ordinary vans carrying a special container containing 3,000 liters of fuel and sell it in Pakistan. According to the Razzaq plan, the fuel porters should give their received currencies to the IRGC and receive only a small amount.

This plan not only serves the IRGC to plunder deprived people, but it also allows it to shoot and kill those deprived people who are unable to have one of these cards or refuse to succumb to the IRGC’s blackmailing.

Protests on Monday initially started when a group of fuel porters gathered in protest to this plan, and the IRGC forces opened fire on them.

People across Iran have expressed solidarity with the risen people of Sistan and Baluchistan. Therefore, the uprising and the national unity have terrified the regime’s leaders.

“We are now in an atmosphere where rationality does not prevail, but emotions and excitement prevail [i.e., people’s hatred toward the regime], we must be vigilant. If something unpleasant happens, the dry or wet, hardliner or reformist and all officials will burn together,” Ahmad Ali Mohebati, Sistan and Baluchistan’s governor, said on Thursday.