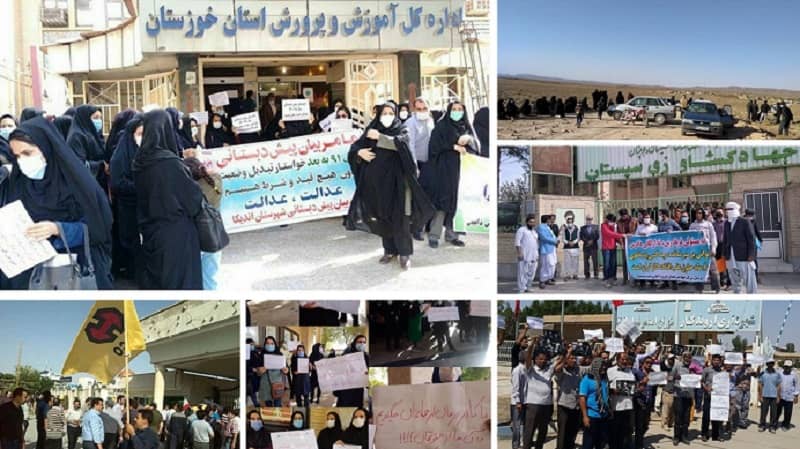 Reports from Iran indicate there were further protests by various sectors of society within the past week. These protests are mainly due to Iran’s economic problems and their subsequent pressure on the society.

Yet, this week started with large protests following the passing of Mr. Mohammad Reza Shajarian, a renowned master of Persian traditional music. Mr. Shajarian passed away on Thursday, October 8, after a long battle with cancer. His support for the Iranian people and defiance of the mullahs’ regime, coupled with his great artistic works, had made him a popular and much beloved figure among people.

On the other hand, the mullahs’ regime had banned him from holding concerts and deprived people from hearing his voice from the state television.

Protests by other sectors of society

Reports gathered by the People’s Mojahedin Organization of Iran (PMOI/MEK) indicate protests by all walks of life within the past seven days. These protests are mainly due to the economic hardships. Iranian workers and employees are systematically deprived from receiving their paychecks for months.

According to the MEK, municipal workers in the city of Arvand Kenar, southwest Iran, held a protest in front of this city’s municipality building, demanding their delayed paychecks.

Again, on Sunday, health care workers and nurses in Ahvaz, southwest Iran, gathered at the University of Medical Sciences protesting their delayed paychecks.

These health workers are deprived from receiving their paychecks, while they are on the frontline of combatting the coronavirus outbreak, which has, due to the regime’s inaction, taken the lives of over 123,000 people.

On October 10, and for the second consecutive day, locals in the village of Banan-e Bala near Zarand County, Kerman Province (central Iran), held a protest rally in front of the Khomrud coal mine. This protest started in the area which the government mines have caused the wells of the village to dry up.

On Saturday, pre-school teachers held a rally in front of the regime’s Department of Education in Ahvaz, southwest Iran. They demanded a change to their employment status and protested previous promises made two years ago by the regime’s members of parliament and the Ministry of Education.

Despite making promises, the mullahs’ Ministry of Education has not changed the employment status of hundreds of preschool teachers in Khuzestan province.

In line with their previous gathering, the workers of the HEPCO construction company in the city of Arak, central Iran, protested the transfer of Hydro Atlas, a HEPCO subsidiary, to the private sector.

Nearly 1.7% of the shares of Hydro Atlas Company have been already transferred to the Privatization Organization without the knowledge of the shareholders.

The Heavy Equipment Production Company (HEPCO) was one of the first and biggest manufacturers of construction in Iran and the Middle East. Like many other vital resources of Iran, HEPCO has fallen victim to the regime’s plundering, institutionalized corruption, and mismanagement. HEPCO, once a symbol of Iran’s industrial flourishment, due to the decades of mismanagement has now turned into a bankrupt industrial complex.

On Saturday, a group of contract workers from the Sistan Plain Irrigation Project gathered in front of the Agricultural Jihad building in the city of Zabol, southeast Iran, protesting their eight-month-delayed paychecks. In addition, these workers, have not yet received their bonuses for the previous Persian calendar year.

In a similar development on Sunday, workers of Tehran’s orphanages held a protest rally due to their poor living conditions and their job status remaining in limbo. They also condemned the negligence of the Tehran General Department of Welfare in resolving their problems.

According to one of the protesters over 70 female contract workers of this orphanages have not received their paychecks for more than six months, and the relevant authorities have ignored their demands.

The authorities and state media have been warning of another round of the major Iran protests due to the economic grievances.

In this regard, Mohsen Hashemi, head of Tehran’s City Council, warned about the increasing rift between social classes and the subsequent rising feelings of hatred in society. “In today’s society, we are witnessing a deepening gap and a growing sense of hatred and separation between different cultural, political and ethnic tastes and approaches. Some of these challenges stem from factional practices and tastes in official responsibilities. Unfortunately, cultural institutions and officials sometimes deepen differences instead of trying to resolve them,” Hashemi told the state-run Hamdeli daily on Wednesday.

THE CONTENT OF THIS PAGE WILL BE UPDATED WITH THE LATEST NEWS UPDATE: 9:00 AM CEST Coronavirus Pandemic in Iran: 135,300 Fatalities in 460 Cities The People’s...
Read more
News

Various cities across Iran witnessed protests by all walks of life, according to reports tallied by the People’s Mojahedin Organization of Iran (PMOI/MEK), from...
Read more
Search