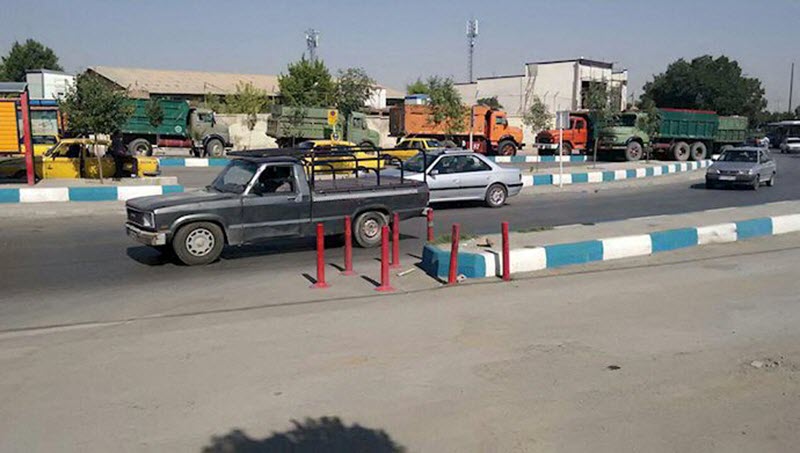 Truck drivers and owners in Ishafan, Iran, were joined for the second day of their strike by large crowds of people, especially the youth, on Wednesday, August 1, when they marched to the city’s main streets.

The marching crowd, which included many shopkeepers who closed their stores, chanted anti-regime slogans as they marched, including:

• “Death to the dictator”

• “[The Regime’s promises] are all lies”

They also called on their fellow Iranians to rise up with them against the Regime, using the chants:

• “Any Iranian who remains silent is committing treason”

Many striking industrial workers also took part in the demonstration, carrying signs that signified their anger at the city’s high prices and terrible living conditions.

The Regime responded to this protest by sending in their repressive forces and anti-riot units to disperse the crowds and prevent the expansion of this protests, which shows how weak the regime must truly be if they are scared of the people exercising freedom of speech and assembly. The security forces used tear gas to force the people out.

However, the Iranian people fought back, lighting tyres on fire to counteract the tear gas, and continued their protest in spite of the repression. The security forces are reluctant to attack the protesters directly, so protests were still continuing at the time of writing and the Regime has been unable to suppress its people.

Isfahan is one of any Iranian cities that has seen continuous unrest since the uprising began in December. In recent months, farmers have started protesting over the lack of access to water and the corruption that hampers the people’s access to natural resources.

Another protest that began on July 31, was orchestrated by the people of Karaj who took over Gohardasht First Square, chanting slogans like: “Tanks, Cannons, Firecrackers, the mullah must go!”, “Do not be afraid, we are all together”, and “Our enemy is the mullah but they falsely blame the United States”.

The Regime also tried to gain control here, but the people fought back again, even creating barricades and lying down in the streets to stop the movement of vehicles.

Maryam Rajavi, the President-elect of the Iranian Resistance, saluted the struggles of all Iranians fighting for freedom. She said that the mullahs were the source of all the darkness in Iran, as they have wasted the people’s money and repressed the people.

Previous article
Protests in Shapour, Isfahan, Central Iran, Continue Over Corruption and Dire Economy
Next article
The Second Day of the Uprising in Isfahan, With Chants of Death to the Dictator, Khamenei, Shame on You! Leave the Country!