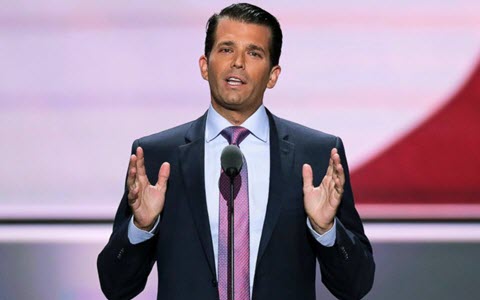 Donald Trump Jr. President Trump’s son has written in his twitter on Wednesday, June 14, 2017, that he believes John Kerry, former US Secretary of State is still fighting for Iran regime.

In this meeting which was held on June 12. a number of other world leaders were present.

Son of the US president Trump wrote on his Twitter:

Trump Jr. Tweets refered to the money sent to Iranian regime in wooden boxes containing about $400 million in cash by the Obama administration former president of America.

On January of last year, the Wall Street Journal revealed details of a suitcase of $400 million cash from the Obama administration to Iranian regime. The event coincided with the release of four American prisoners in Iranian prisons. Officials said that Euro, Swiss franc and other currencies were sent to Iran by a cargo plane without any sign. According to the authorities in U.S.  this money was obtained from the central banks of Netherlands and Switzerland.

Paul Ryan, Republican Speaker of the US House of Representatives referring to the WSJ report said: “Publication of WSJ report indicates that Obama administration wanted to keep the exchange of 4 American prisoners with paying this money to Iran secret”. Donald Trump who was a candidate for the U.S. presidency at the time, regarding the release of such report, in his tweets described this act of Obama administration, another failure along with other continuous failures in his foreign policy arena.