Cross party members of the British parliament and political personalities joined the Anglo-Iranian communities from across the UK and called upon the British government to take the lead for the establishment of an independent committee to investigate mass executions of 30,000 political prisoners in 1988 and to bring those responsible to justice. They stressed the time has come to end impunity for Iranian officials who are responsible for serious human rights abuses in the country.

The call was made at a major rally in Trafalgar Square on Saturday, September 2, where participants and speakers urged the UK government to raise the issue at the upcoming session of the UN General Assembly and UN Human Rights session later in September. 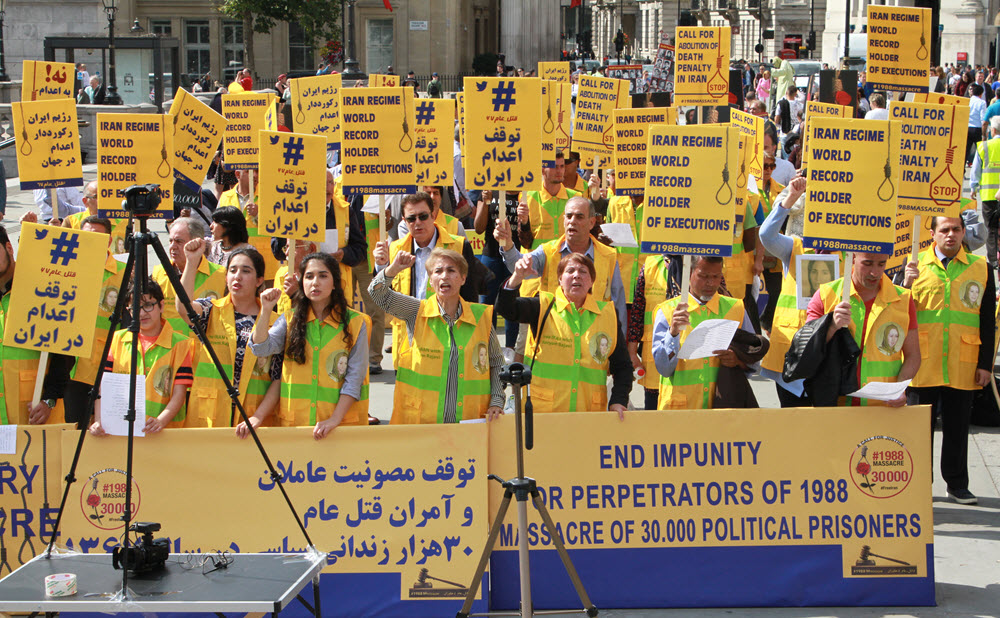 The victims of this atrocity, known as one of the worst crimes in Iran’s modern history, were commemorated by an exhibition as well as street and music performances by Iranian renowned artists and musicians. Upon a fatwa by the first Supreme Leader, Khomeini in July 1988, more than 30,000 political prisoners, the overwhelming majority of whom were activists of the People’s Mojahedin Organisation of Iran (PMOI/MEK), were executed in a few months and were buried in secret mass graves.

Representatives of Anglo-Iranian Associations and families of the victims of the 1988 massacre also delivered a letter with demands raised at the rally to the Prime Minister’s Office at Number 10 Downing Street.

Participants also expressed solidarity with some 20 political prisoners in Iran, who have been on hunger strike since July 30 in protest at the inhuman conditions and repressive measures against political prisoners and asked the FCO to condemn this inhuman treatment and act for their immediate release. 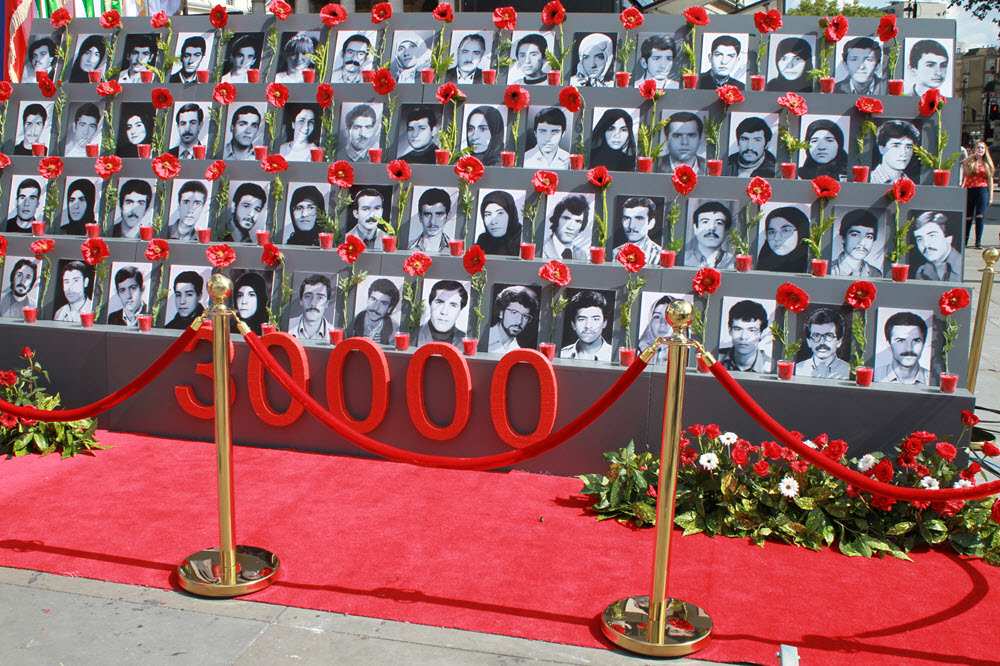 The President-elect of the National Council of Resistance of Iran (NCRI), Mrs Maryam Rajavi, in a message to the rally said: “EU member states and the United States collaborated with the mullahs for years and helped them cover up their crime against humanity.”

“I urge the people of Europe to question their governments about their continued relations with a regime whose rule relies on genocide. Now, the mullahs’ deceptions have become transparent for the world. As if the massacred political prisoners and all the 120.000 executed martyrs have become an issue again. We urge the UN High Commissioner for Human Rights to form an independent inquiry committee to investigate the 1988 massacre”, she added. 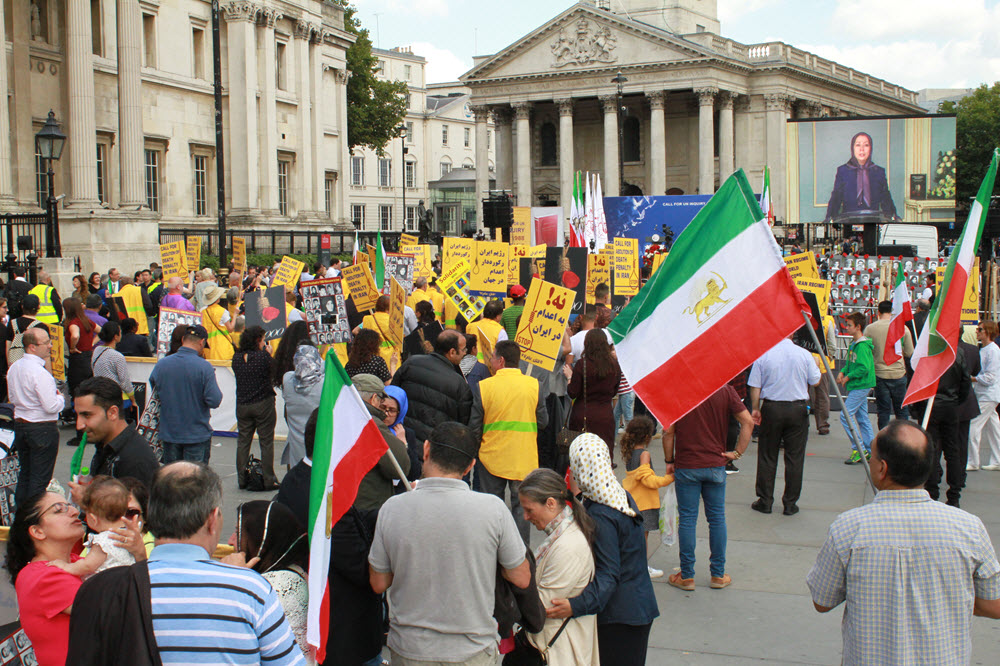 Mrs Rajavi emphasised the importance of putting human rights at the centre of any policy toward Iran and said, “European governments must at least make their trade and diplomatic relations with the Iranian regime contingent on an end to torture and executions. So long as the mullahs sense that they have a free hand in human rights violations in Iran, they will continue their warmongering and aggressions in the Middle East. And so long as the mullahs continue their belligerence in the region, global security and peace will be endangered including in Europe”.

Sir David Amess, Conservative MP and co-chairman of the British Committee for Iran Freedom (BCFIF), said, “29 years on from the massacre the perpetrators have still not answered for their crime. Many of them are instead holding senior and ministerial positions in Iran.

“The issue of Justice for the victims and holding the perpetrators of this atrocity responsible was and will be one of the main demands of the Iranian society and Iranian diaspora. I can confidently say that this demand has also a widespread, cross-party support in both Houses of Parliament, as 80 MPs signed a parliamentary motion on this issue that I tabled last year”, he added.

In her remarks, the Rt Hon. Theresa Villiers, Conservative MP and former Secretary of State for Northern Ireland, said, “The focus of the rally on Saturday is the mass killings which took place in 1988 … Thousands of political prisoners were executed without trial… I will continue to work with the British Iranian community in my constituency to highlight the issue of human rights abuses in Iran, and want more people to know what happened so those responsible can be brought to justice.”

Struan Stevenson, president of the European Iraqi Freedom Association (EIFA) and member of the European Parliament representing Scotland (1999-2014), criticised the decision by the EU Foreign Policy Chief to attend the inauguration of President Hassan Rouhani in Tehran in August.

“Mogherini’s presence at the ceremony delivered a massive PR scoop for Tehran’s turbaned tyrants. Rouhani has been hailed in the West as a moderate and a reformist, despite the fact that more than 3,500 people, including 80 women, have been executed during the four years he has been in office, catapulting Iran into pole position as the world’s number one state executioner per capita. 700 people have been executed so far this year, including women and teenagers”, he added.

Professor Mohamed al-Qubaty, Minister of Tourism of Yemen, said, “I understand your frustration over the impunity that the international community has provided the regime in Tehran. The same Iranian officials that executed 30,000 innocent people in prisons across Iran 29 years ago are now behind the chaos in Yemen by killing and supporting terrorism and Sectarian policy.” 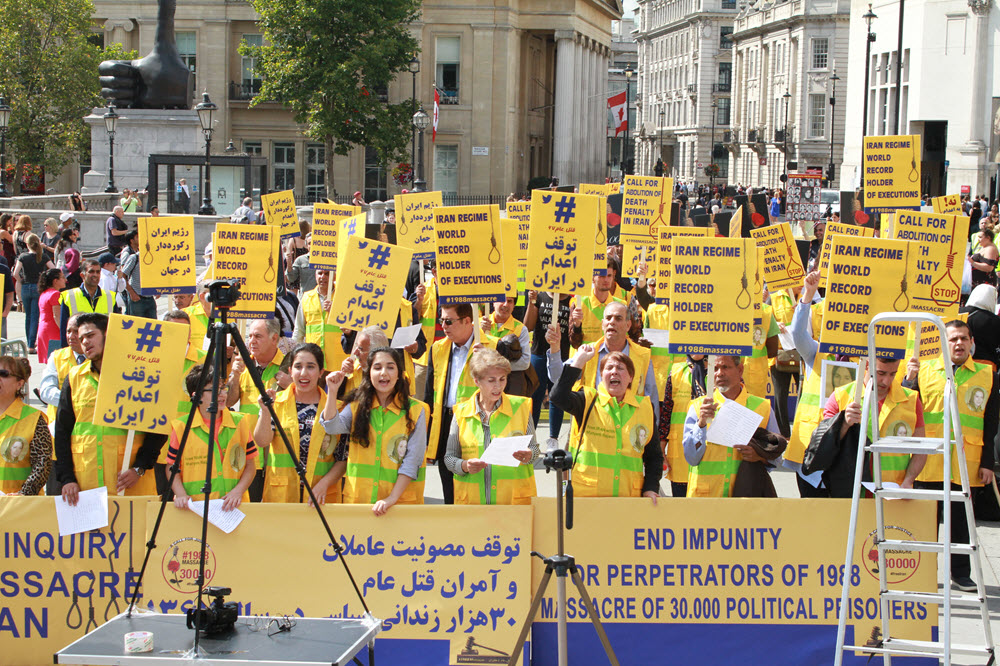 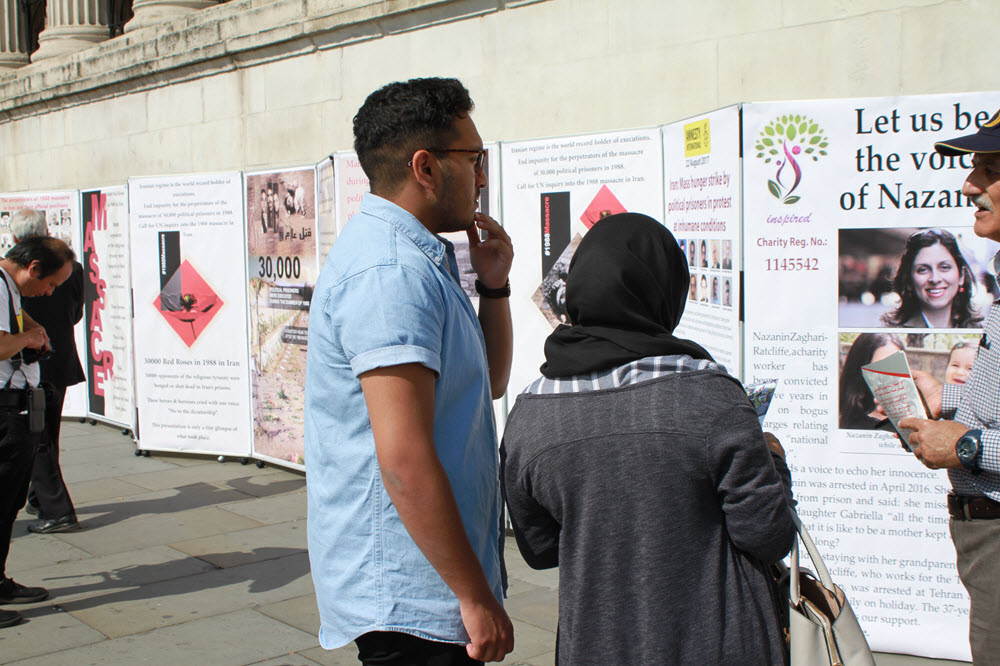 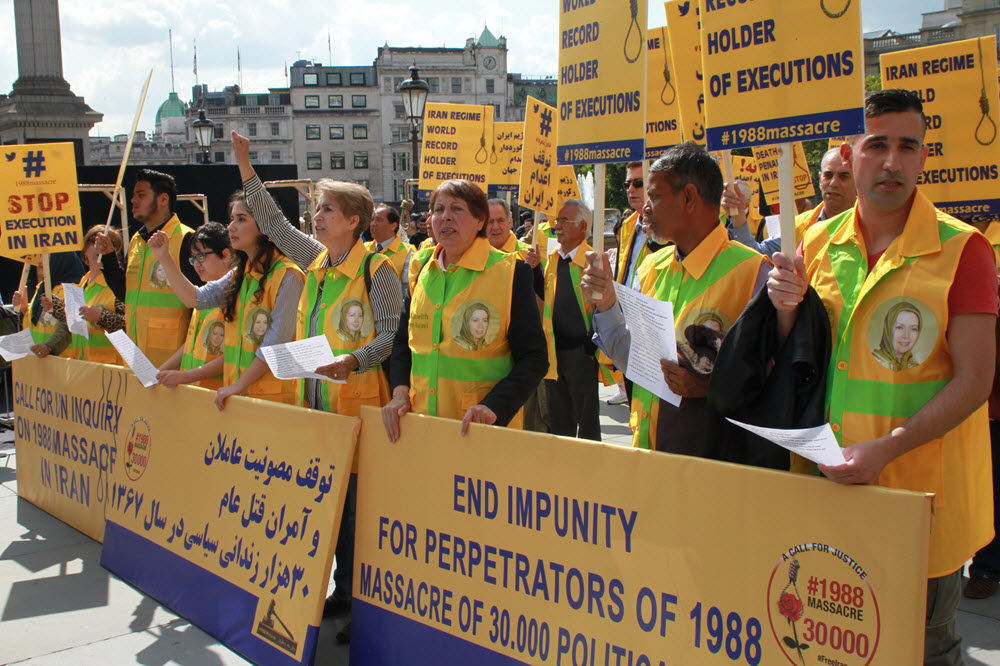 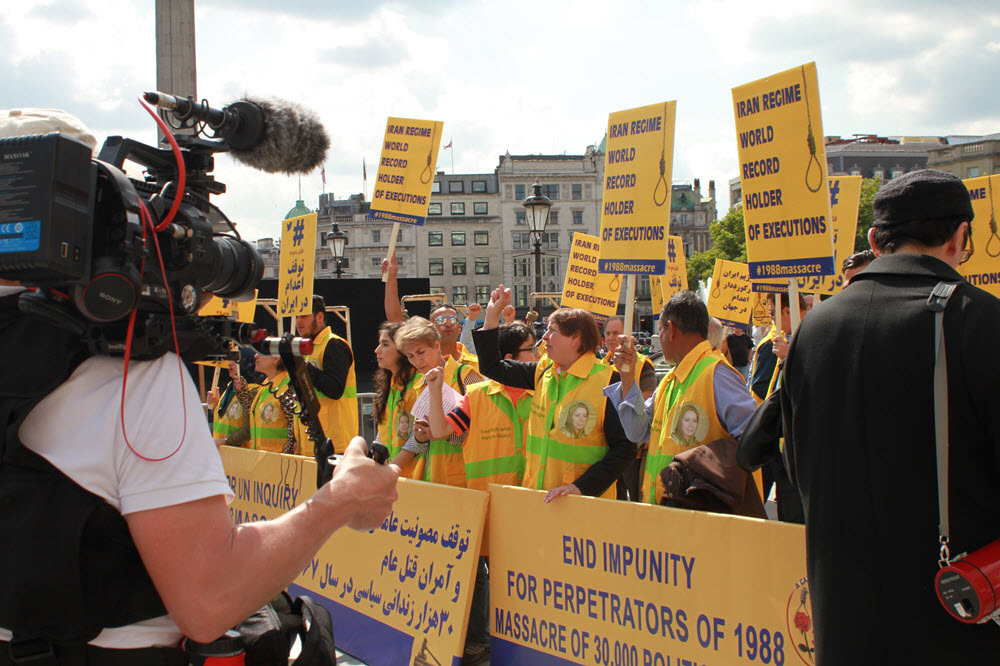 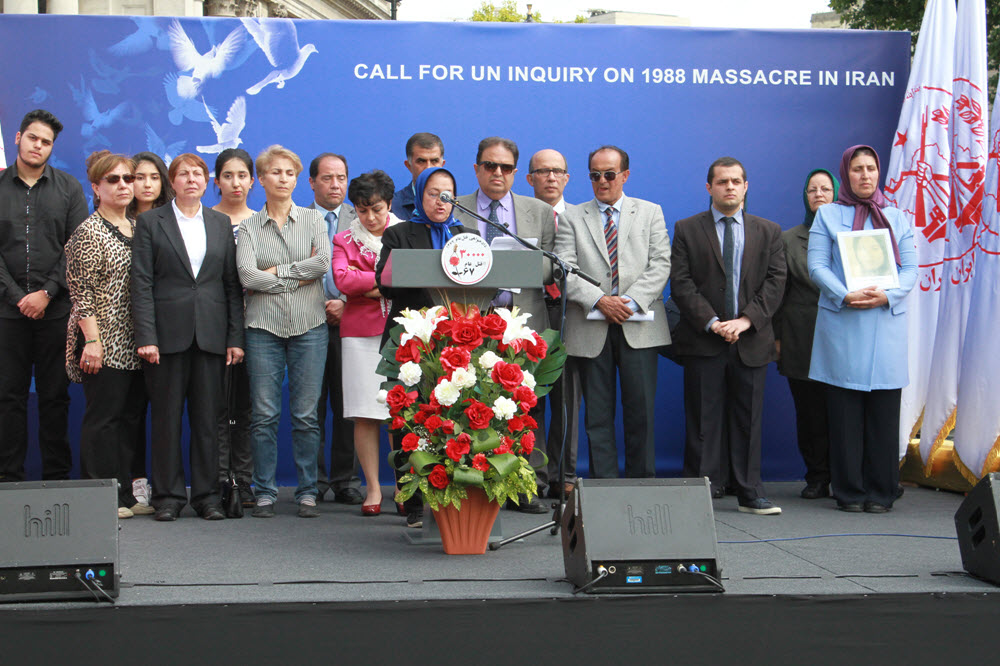 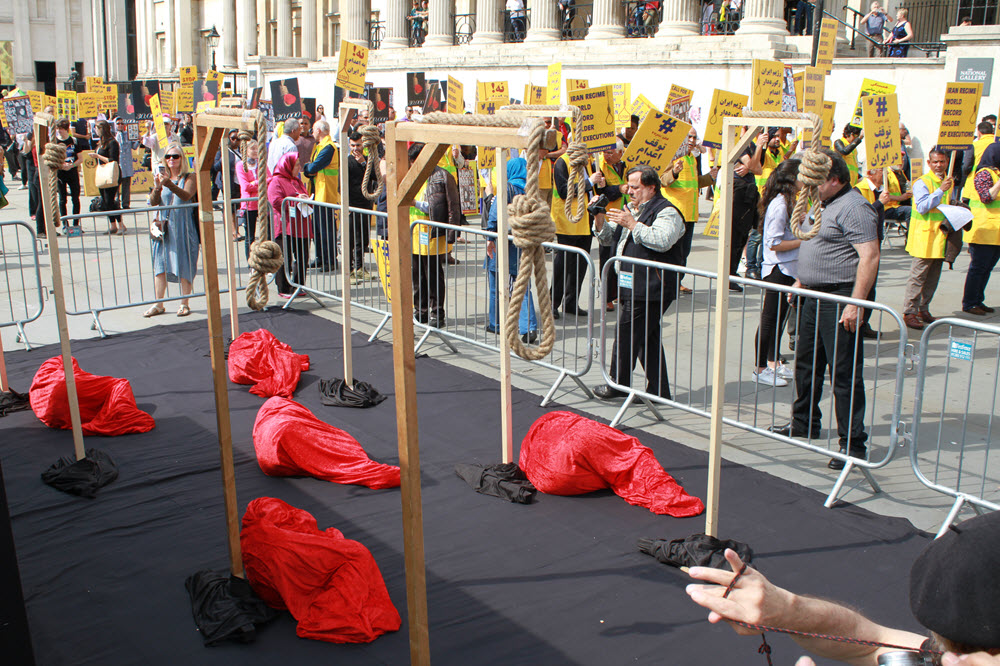 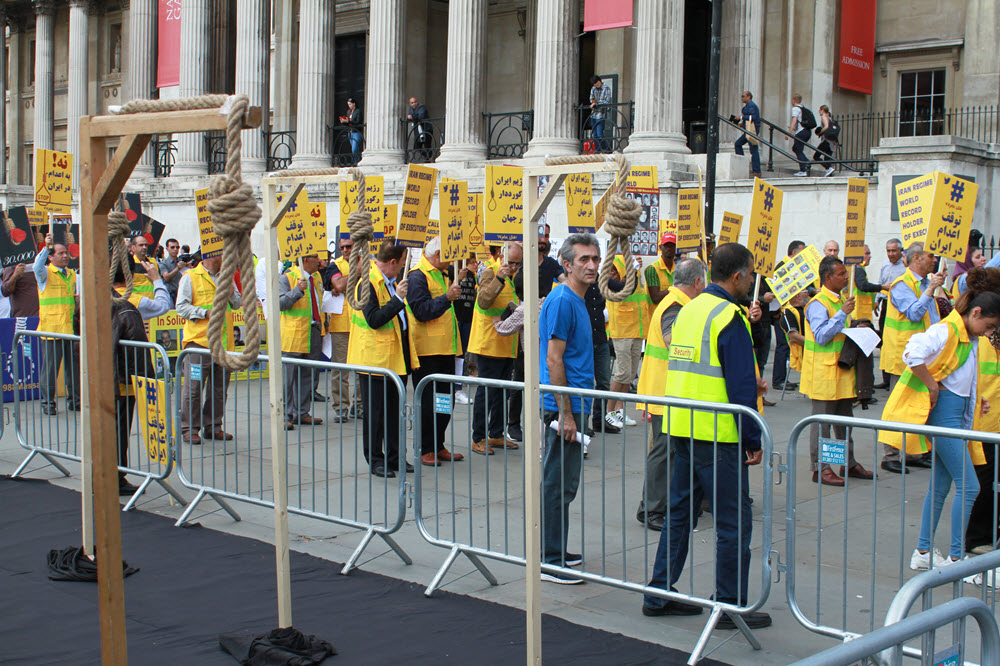 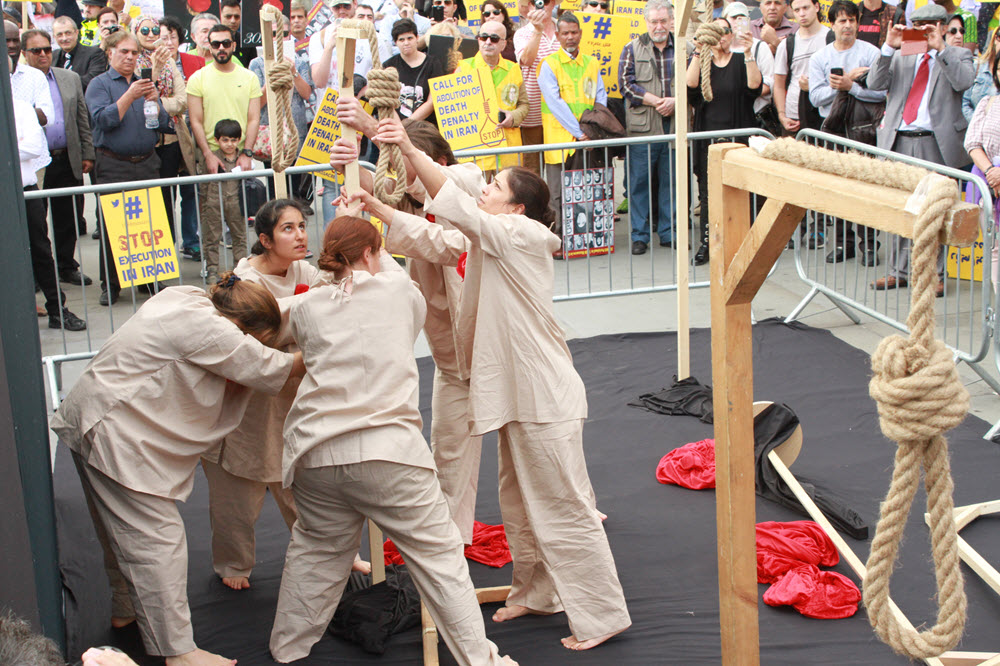