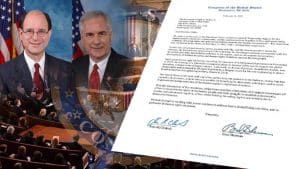 There is a resolution pending in the House of Representatives which calls for a more assertive set of policies toward the Iranian regime. H. Res. 118 was presented to the public in a news conference on Tuesday, by which time it had acquired a bipartisan list of 225 co-sponsors. Such broad-based political agreement underscores the importance of the resolution’s observations, coming at a time of virtually unprecedented polarization in most other matters.

The resolution’s sponsors and all other supporters of a stronger Iran policy are sure to view this bipartisanship as an asset when it comes to the new Iran policy.

H. Res. 118 calls attention to two previous resolutions that evoked much the same purpose. One of these, H. Res. 4744 of the 115th Congress, urged the US government to formally “condemn Iranian human rights abuses against dissidents, including the massacre in 1988 and the suppression of political demonstrations in 1999, 2009, and 2017.” The new resolution begins by reiterating the expectation of accountability for the 2017 protest movement, which lasted through much of January 2018. It then adds that similar action is needed on the regime’s even more severe crackdown on dissent during another nationwide uprising in November 2019.

The two consecutive uprisings featured similar anti-government slogans and explicit calls for regime change. The November 2019 uprising was also nearly twice as large as its predecessor, encompassing nearly 200 cities and towns. Faced with this, regime authorities opened fire on the latter demonstrations almost immediately, and after only days of clashes, the death toll mounted to 1,500. This figure was confirmed by Reuters, and later in 2020, Amnesty International published a report detailing the months of torture that participants had been subjected to.

The brutality of Tehran’s political repression is unmistakable, and the West’s commitments to human rights would surely prove meaningless if it took no action and made no statement on the topic. Unfortunately, critics of the Iranian regime have a little historical basis for confidence in the US government’s response to such matters. The same is true, arguably on an even greater scale, for the nations of Europe.

In 1988, most of the Western world turned a blind eye to what is considered the late 20th century’s worst crime against humanity. In the summer of that year, Iranian prisons established “death commissions” to enforce a fatwa from Ayatollah Khomeini which declared that opponents of the theocratic system were deserving of death because they were at war with God himself. Anyone who failed or refused to convince the death commissions of their fealty to the supreme leader was promptly hanged, and it is estimated that around 30,000 Iranians were killed in that fashion over several months.

The legacy of those killings persists in the form of Tehran’s impunity in matters of human rights. And over the years that impunity has expanded to include incidents taking place both within and beyond Iran’s borders. H. Res. 118 hints at this situation by devoting a portion of its text to domestic human rights abuses and a portion to the recent and ongoing threats of terrorism coming either directly from the Iranian regime or via its proxies.

In June 2018, just months after the first of the recent uprisings, several European law enforcement agencies exposed what is arguably the most significant example of this phenomenon in many years. Their joint operation disrupted a terrorist plot that involved a high-ranking Iranian diplomat transporting explosives into Europe on a commercial flight, then handing them off to a pair of operatives with instructions to infiltrate the annual gathering of expatriate activists and political supporters organized by the National Council of Resistance of Iran.

The recent House resolution notes that “several prominent bipartisan former United States Government officials, several retired United States generals, congressional staff, and thousands of American citizens participated in that gathering.” Similarly, high-profile European dignitaries were also in attendance, and there is little question that some of this Western personnel would have been among the casualties of the planned explosion, which primarily sought to target NCRI leader Maryam Rajavi.

The plot against the NCRI gathering was at least the second attempt on Mrs. Rajavi’s life in 2018 alone. This is a testament to the threat posed to the regime by her coalition and especially its lead constituent group, the People’s Mojahedin Organization of Iran (PMOI/MEK). But the escalation is also a testament to the fact that Tehran feels a shocking amount of confidence in its ability to attack Iranian dissidents on Western soil and face little to no consequence.

This sense of impunity was finally challenged last November with the start of prosecution in a Belgian court for Iran’s terrorist-diplomat Assadollah Assadi and his three co-conspirators. All four were convicted in February and sentenced to prison terms ranging from 15 to 20 years. But critics of Western policy toward Iran are rightfully emphatic that accountability must not end there. H. Res. 118 joins in that chorus by noting, for instance, that the ruling in the Assadi case held “that the four defendants are part of a larger terrorist group within a specific Iranian intelligence service.”

The resolution praised the expulsion of Iranian diplomats in response to that terror plot and an earlier one in Albania. This, it said, “sends the right message that no Iranian embassies should be used for plotting terror and conducting spying activities against dissidents.” But the document then goes on to underscore the need for more comprehensive pressure, as might be achieved in part by shuttering Iranian embassies altogether.

The resolution’s message to the Western policymakers is that they should not be fixated on salvaging the 2015 Iran nuclear deal. As important as Iran’s nuclear file is, it should not overshadow other matters that feature more immediate threats to both Iranian and Western lives.