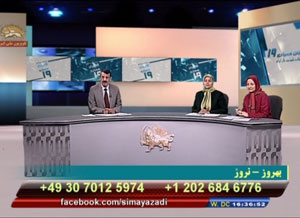 NCRI – Prominent Iranian opposition satellite channel Simaye Azadi, or ‘Iran National Television’ (INTV), is holding its latest multi-day telethon which commenced on Friday. Viewers are being urged to call and send contributions so the channel can maintain its activities.

A non-profit 24/7 satellite channel operating from Europe, INTV broadcasts news and information to Iranians around the world via satellite and the internet. Though officially banned in Iran and despite a sustained effort by the regime to jam satellite signals, senior officials of the regime have admitted that 40 percent of Iranian families have access to the satellite channel.

In the past 24 hours, large numbers of Iranians from inside Iran and many others living in exile have phoned in to declare their solidarity with the Resistance and make financial contributions to keep Simaye Azadi on the airwaves.

The donators are from all walks of life including workers, teachers, bazaar merchants, industry owners, artists, intellectuals, aged mothers and fathers and young students.

Taking great personal security risk and despite their harsh living conditions, many donators from Tehran and other Iranian cities have called in thus far to donate a part of their limited financial assets in order to support INTV as the voice of their legitimate resistance. Some are raising funds together and announcing their combined donations as a group. Others in Iran have said they will send their support to INTV through their friends and relatives living abroad.

Mohsen calling in from Iran said: “I want to offer 5 million Rials ($170) to the voice of our suffering people.”

Another viewer from Iran who only gave her first name but did not announce her city, for fear of retribution by the authorities, said: “I am Parvaneh. I support Simay Azadi with my meager $100 because this is the only station which informs the public in the best manner about the oppression of the Iranian people, and in particular it has had an effective role in exposing the regime’s nuclear projects.”
Political dignitaries from European countries have in the past 24 hours symbolically participated in the fundraiser to show their solidarity with the Iranian people.
The regime has stepped up internet censorship, blocking around five million websites dedicated to arts, social issues and news and filtering the contents of blogs and social media. It also tracks down and arrests many online activists inside Iran. Many have therefore turned to INTV as a means of obtaining real information without being traced.

The regime aims to prevent the Iranian people from becoming privy to its egregious and nefarious conduct inside and outside of Iran or to be informed of anti-government protest, strikes and other activities by the Iranian Resistance.

INTV has played a unique role in breaking the mullahs’ censorship and providing the Iranian people with uncensored news and flow of information.

It is banned in Iran for reports that expose the violation of human rights perpetuated by the mullahs and for raising awareness among millions of Iranians of the regime’s fundamentalism, suppression of ethnic minorities, meddling in the affairs of other countries, and particularly about their support for terrorism in Syria, Iraq and elsewhere in the region.

INTV provides constant news, breaking news, talk shows, live question and answer sessions, art and cultural programs, special programs for the youth and women, and political satire to millions of Iranians all across Iran who tune in to watch with their satellite dishes. The Iranian regime’s officials on scores of occasions have warned against the growing popularity of this channel.

Culture Minister Ali Jannati has said that in Tehran, over 70 percent of citizens watch satellite channels.

INTV relies heavily on volunteer work of Iranians all over the world and provides for its expenses solely through donations of Iranians inside and outside of Iran as well as citizens of other countries who support the cause of human rights and freedom in Iran.

Gholamreza Khosravi, an activist of the People’s Mojahedin Organization of Iran, PMOI (Mujahedin-e Khalq, MEK), was executed in Iran on June 1, 2014, on the charge of ‘enmity against God’ for collecting information and giving monetary assistance to the Sima-ye Azadi station.

In a similar four-day telethon held by Simay Azadi (INTV) in August 204, a total of $4.55 million was raised.