One of the methods used by the Iranian regime to pursue its demonization campaign against the People’s Mojahedin Organization of Iran (PMOI or MEK) has been to publish books presenting a false narrative. The Iranian regime’s oppressive institutions, such as the Ministry of Intelligence and Security (MOIS) and the Revolutionary Guards (IRGC), are involved in publications of books and reports against the MEK. While no one can find books by the MEK in libraries across Iran, there are plenty of books by the regime that demonizes the MEK.

These books are a repeat of the same baseless allegations the regime has used for the past four decades to tarnish the image of its only viable alternative. A glance at the excerpts of some of the books published in the state-run media elucidates the true nature and purpose of these books.

The regime has allocated a huge budget for the publication of these books containing disinformation even as the Iranian people are grappling with poverty and both the regime and its apologists whine about international sanctions. The following is an example of the organizations and foundations in charge of publishing the books containing disinformation against the MEK.

Islamic Revolution Document Center: This center, published “Iran’s History after the Islamic Revolution.” The 5th volume of this book contains disinformation against the MEK and its history. In addition, this center has published dozens of other books against the MEK. This center was founded by Hamid Rouhani, with Khomeini’s direct order in 1989. In 1995, Ruhollah Hosseinian became the center’s president. Hosseinian was at the time the Deputy Prosecutor of the so-called “Islamic Revolutionary Court” of Tehran. He was simultaneously active in the MOIS. The regime’s former president, Mahmoud Ahmadinejad, appointed Hosseinian as his political and security advisor. Hosseinian recently died. He was active in oppressing the MEK members in the 1980s. The state-run Sobh-e Emrooz daily, on September 19, 1999, quoted Hosseinian as saying: “We were also killers once.”

The organizations involved in funding these publications are the regime’s huge financial institutions, in connection with and under the supervision of the highest authorities in the country, including the Supreme Leader. Some of these organizations are:

The books published against the Iranian Resistance from 1979 to August 2020 are a total of 538 volumes, of which: 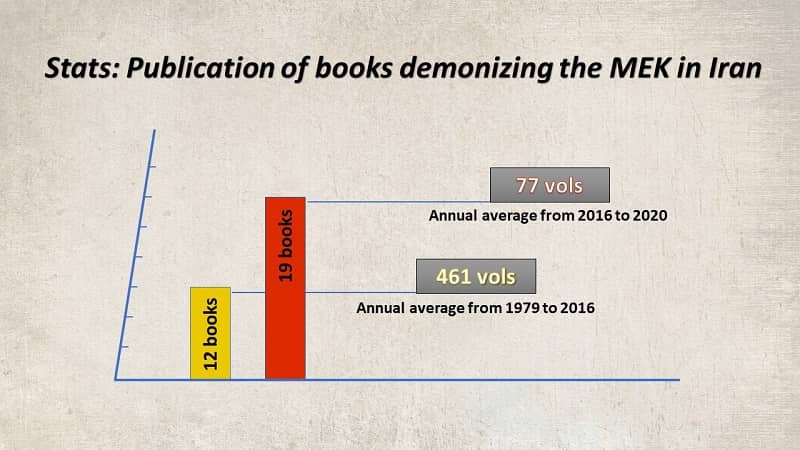 Now it bears asking why the regime spends such an amount of time and energy on publishing these books which demonize the MEK? Why does the regime not allow the Iranian people to read the MEK’s own publications? And why from 1981 until now is having a MEK publication considered a crime punishable by death in Iran?

The statistics above show the number of books published against the MEK has increased by 73%. All the while, this is far less than the real statistics of the regime’s efforts for demonizing the MEK and spreading disinformation.

For example, the state-run Young Journalists Club on July 18, 2020, reported that on the anniversary of the MEK’s “Eternal Light” operation, only in Shahrood, in central Iran, “at least 400 programs” were on the agenda, including “introducing books and software, and playing documentaries, etc.”

The question is: Why has the regime increased its demonization campaign, particularly publishing books containing disinformation, against the MEK from 2016?

In 2016, after a successful international campaign, the MEK members and officials relocated to Albania. For years, the regime had used its terrorist proxy groups or its puppet government in Iraq to launch attacks on the MEK or to put pressure on them, to annihilate its viable alternative, but it had failed.

After the MEK members were relocated to Albania, the regime increased the level of its demonization campaign, to not just tarnish the image of the MEK, but also pave the way for terrorist activities against them. The regime’s foiled bombing plots against the Iranian Resistance in Albania in March 2018 and Paris in June 2018 are two examples of the regime’s failed terrorist attempts against the MEK.

In addition, and more importantly, more and more people, particularly youths and women inside Iran, are attracted to the MEK and its values. Despite the mullahs’ oppression, the MEK’s “Resistance Units” continue to spread across Iran, and they have played a leading role during the major Iran protests in 2018 and 2019. This has very much terrified the regime.

In this regard, some of the so-called “authors” of the aforementioned books reflected the regime’s fear of the Iranian resistance.

In a nutshell, the regime’s ongoing demonization campaign against the MEK and the publication of books containing disinformation about the Iranian Resistance are testaments to the regime’s defensive attitude and weakness in facing the MEK and its growing influence inside Iran.

The regime’s demonization campaign against the Iranian Resistance has three intentions: First, as to the outside world, the mullahs try to tarnish the image of their viable alternative, thus spreading the false notion that there is no alternative to their medieval and terrorist regime. Therefore, the western government should continue appeasing the ruling theocracy in Iran.

Second, by demonizing the MEK, the regime tries to justify its oppression inside Iran and its terrorist activities abroad against the MEK and the Iranian Resistance.
Third, and most importantly, the mullahs try in vain to prevent people from joining the MEK. The ongoing activities by the MEK Resistance Units and their spread across Iran show the regime’s strategy has failed.

Previous articleIran’s State Media: Social and Economic Circumstances Indicate Major Uprisings Are on the Way
Next articleWhile the Campaign for Justice Over Iran’s 1988 Massacre Goes on, Any Attack on Amnesty International for Disclosing the Facts Is Tantamount To Assisting the Mullahs’ Intelligence Ministry and the Perpetrators in Their Objective