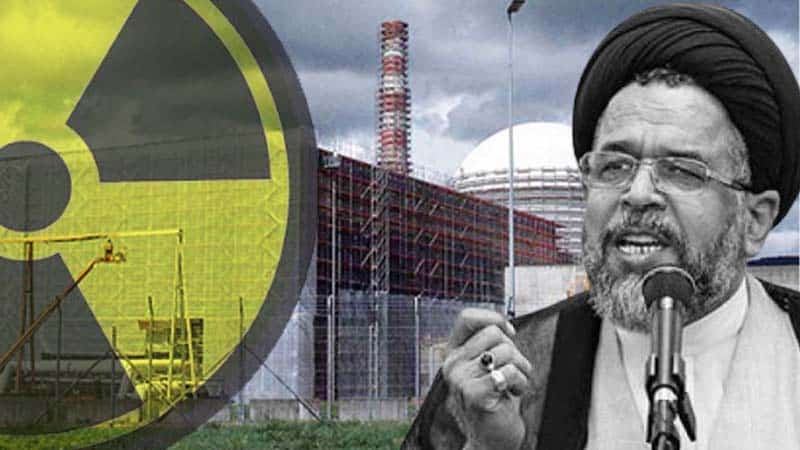 Iranian Intelligence Minister Mahmoud Alavi recently delivered remarks to state media in which he admitted that if it was “pushed” by Western adversaries, the Iranian regime might actively pursue the development of a nuclear weapon. It was a remarkable departure from the regime’s longstanding but highly suspect position that its nuclear program is exclusively peaceful. But it was not the only remarkable disclosure that Alavi made on Tuesday.

In the same interview, Alavi identified a number of recent films and television series as having been produced by the Intelligence Ministry.

“Given my experience in the ministry, we entered activities related to creating films and series to educate the public, protect the public against espionage, and achieve intelligence goals,” Alavi said. “The movies Rubah (The Fox), Majerayeh Nimrouz (The Nimrouz Affair), Cyanur (Cyanide), Emkan-e Mina, Ruz-e Sefr (Day Zero), Shabi ke Mah Kamel Shod (The Night of the Full Moon), and the TV series Puzzle, The Dream that was Interpreted in Reverse, Saregh-e Ruh (The Soul Thief), and Khaneyeh Amn (Safehouse) were the result of this collaboration with our dear friends.”

In this way, he acknowledged a level of media penetration by the regime’s propaganda which had long been denied in previous public statements. Together with the acknowledgment of latent nuclear weapons ambitions, this goes a long way toward verifying opposition narratives about both the nature and the function of Tehran’s propaganda infrastructure.

The National Council of Resistance of Iran (NCRI) has issued many reports over the years describing the Intelligence Ministry’s propaganda operations in detail. Among those descriptions are accounts of the recent proliferation of state-produced films and television programs like those Alavi identified by name. More specifically, the NCRI found that this proliferation centered on the growing conflict between the Iranian regime and the organized opposition movement, the People’s Mojahedin Organization of Iran (PMOI-MEK).

That conflict has been especially apparent to close observers of Iranian affairs since the beginning of 2018 when the Iranian regime found itself in the midst of a nationwide anti-government uprising that featured a socially diverse array of communities spanning well over 100 cities and towns. While that movement was still in full swing, the regime’s Supreme Leader, Ali Khamenei, delivered a speech in which he begrudgingly admitted that the rapid spread and widespread coordination of the protests could only have been accomplished with the help of the MEK.

Khamenei’s speech undermined decades of propaganda which portrayed the MEK as an ineffectual group with little popular support, which had been largely destroyed by the regime’s crackdowns. Although authorities have never fully acknowledged it, the MEK was the target of a mass extermination campaign in the summer of 1988, with “death commissions” executing political prisoners throughout the country on the basis of known or suspected ties to the group.

Over a period of just a few months, the death toll from that massacre grew to around 30,000, but the MEK promptly recovered and has been developing an ever-stronger following, along with its parent coalition, both at home and abroad ever since. In the summer of 2018, an estimated 100,000 people attended the NCRI’s annual “Free Iran” rally, including tens of thousands of Iranian expatriates, plus hundreds of political dignitaries from throughout the world.

Coming in the wake of the uprising at the beginning of that year, the rally naturally attracted the attention of the Iranian Ministry of Intelligence, which attempted unsuccessfully to bomb the event and kill the Resistance leader Maryam Rajavi. Last week, the mastermind of that plot, a high-ranking diplomat named Assadollah Assadi, was convicted in a Belgian court and sentenced to 20 years in prison.

Assadi’s trial revealed, among other things, that he had been running a network of operatives spanning at least 11 European countries. This fact should raise alarm among Western policymakers with regard to more than one set of Iranian threats. Certainly, it should make them aware of the possibility of further attempts on the lives of Iranian Resistance activists on European soil. But it should also inspire greater scrutiny of anyone in Europe who appears to be spreading talking points that align closely with Tehran’s.

This too is a phenomenon that the Iranian resistance has been warning about for many years. It has pointed to Iran’s lobby like the National Iranian American Council, and MOIS agents like Massoud Khodabandeh, and his website “IranInterlink” as vectors for propaganda that originates with the Iranian Intelligence Ministry. And it has observed that the activity of these assets has been growing right alongside that of propaganda outlets within Iran.

In both cases, the upward trend is a response to the same conditions, namely the growth of influence for the MEK and the prospect of greater international pressure and diplomatic isolation in the wake of events like Assadi’s conviction. When Mahmoud Alavi confirmed on Tuesday that the production of Iranian propaganda has been accelerating, he unwittingly signaled to Iran’s Western adversaries that they should be more on guard than ever against a range of malign behaviors.

This should not come as a surprise to anyone, but unfortunately Western governments as a whole have not been heeding the warnings of the Iranian Resistance up to this point. While that movement has gained a large and multi-partisan following among European and American policymakers, they continue to face pushback from colleagues who have been more or less oblivious to the influence of Iranian propaganda.

In the wake of Alavi’s statements, we should hope that those policymakers will pay closer attention to the conspicuous overlap in content between publications by questionable figures and those produced by the Intelligence Ministry for domestic consumption in Iran. The NCRI has variously detailed how this phenomenon reflects a cycle of disinformation whereby claims that can be traced back to the regime are reproduced in Western media then later cited by Iranian state media to lend its own talking points an air of credibility.

The purpose of these tactics may be varied and may include the promotion of conciliatory Western policies toward the Iranian nuclear program. But they are increasingly focused on undermining a Resistance movement that has been ascendant for many years and has developed a tremendous amount of momentum in the wake of the January 2018 uprising.

That uprising prompted a period that Maryam Rajavi, the NCRI president, called a “year full of uprisings,” and it ultimately set the stage for an even larger nationwide movement in November 2019, this one encompassing nearly 200 localities. Sadly, the latter uprising was brought to an end by the mass killing of protesters at the hands of the Islamic Revolutionary Guard Corps.

A death toll of roughly 1,500 demonstrated the regime’s continued obsession with stamping out the organized opposition by any means necessary, but it did not prevent protests from recurring across multiple provinces in subsequent months. These developments reflect a situation that is deeply at odds with claims about the regime’s strength and the MEK’s supposed ineffectiveness which remain far too prevalent in Western media.

Mahmoud Alavi has practically acknowledged that when those talking points appear inside Iran, they are the product of carefully managed Intelligence operations. In so doing, he has also practically invited European and American policymakers to reject that propaganda and adopt a new set of policies that recognizes the reality of Tehran’s vulnerability and the opposition’s domestic popularity.

What’s more, the need for this change in policy is underlined by the long history of Iran’s domestic crackdowns and its foreign terrorist attacks. Ignoring Alavi’s invitation would have been foolish in decades past. In the wake of last week’s sentencing of an Iranian terrorist-diplomat, ignoring that invitation would be downright inexcusable.